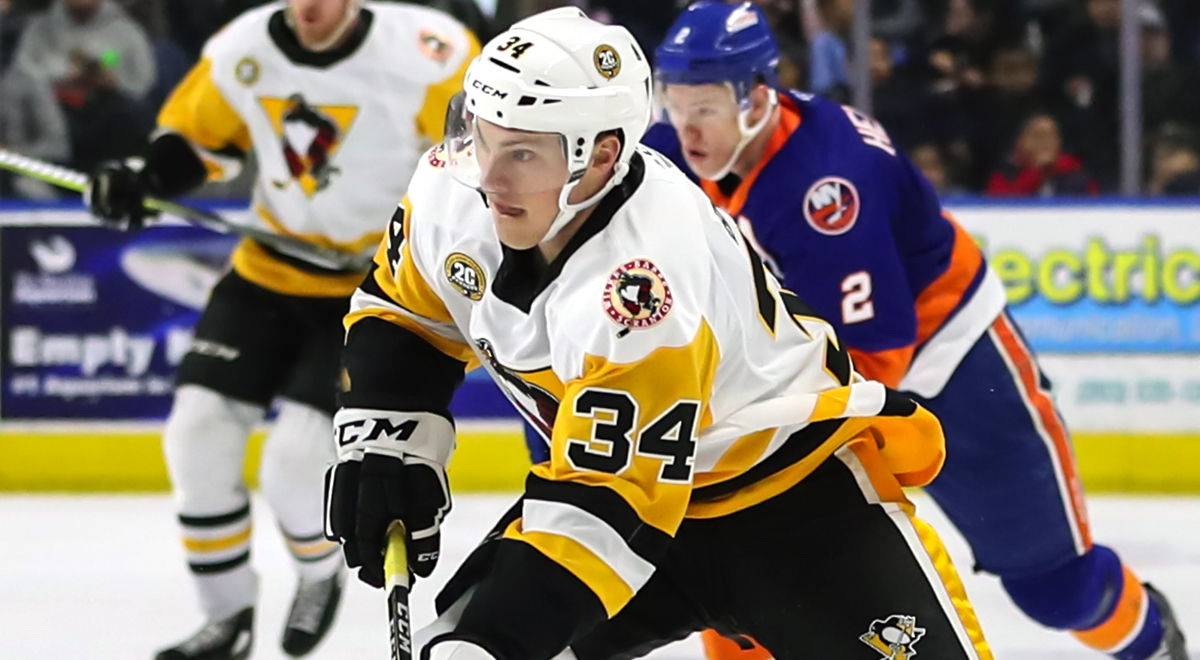 BRIDGEPORT, Conn. – The Wilkes-Barre/Scranton Penguins brought an early onslaught of offense to their Tuesday morning game with the Bridgeport Sound Tigers and earned a 3-1 win at Webster Bank Arena.

After the game’s 10:30 a.m. puck drop, Wilkes-Barre/Scranton (34-26-7-3) rattled off three goals in the first seven minutes of the contest, building a lead that Bridgeport never truly threatened the rest of the day.

Chase Berger blistered a shot past the blocker-side of Bridgeport goalie Jeremy Smith at 5:37 of the first period, giving him his first AHL goal and Wilkes-Barre/Scranton a 2-0 advantage. That lead increased to 3-0 less than a minute later, when Haggerty unleashed another lethal shot to the back of the Sound Tigers’ net on a set face-off play.

Wilkes-Barre/Scranton’s offense continued to generate grade-A scoring chances throughout the rest of the opening frame, but Smith settled in and prevented the Penguins from ballooning their lead any more.

Bridgeport showed some push-back in the third period, out-shooting its opponent, 18-4, in the final frame of regulation. One of those 18 bids went in, as Grant Hutton’s slap shot was tipped in by Jeff Kubiak at 8:49 of the third period. However, Tristan Jarry was otherwise impenetrable, denying 32 shots for his 23rd win of the season.

Smith made 29 saves in defeat.

The Penguins went one-for-five on the power play, while their penalty kill was successful on four of its five shorthanded situations.

Wilkes-Barre/Scranton’s next game is Friday, Apr. 5 against the Binghamton Devils. The Devils’ first visit to Mohegan Sun Arena at Casey Plaza this season is also the Penguins’ final Eyewitness News Fan Friday, with lower-bowl seating available for $14 and select draught beers on sale for $2 from 6:00 – 7:30 p.m. Puck drop between the Penguins and Devils is scheduled for 7:05 p.m.

Fans can also keep up with the Penguins through the AHL’s brand new high definition streaming service, AHLTV. Fans can visit theahl.com/AHLTV now to register for a free AHLTV account and purchase 2018-19 subscriptions.