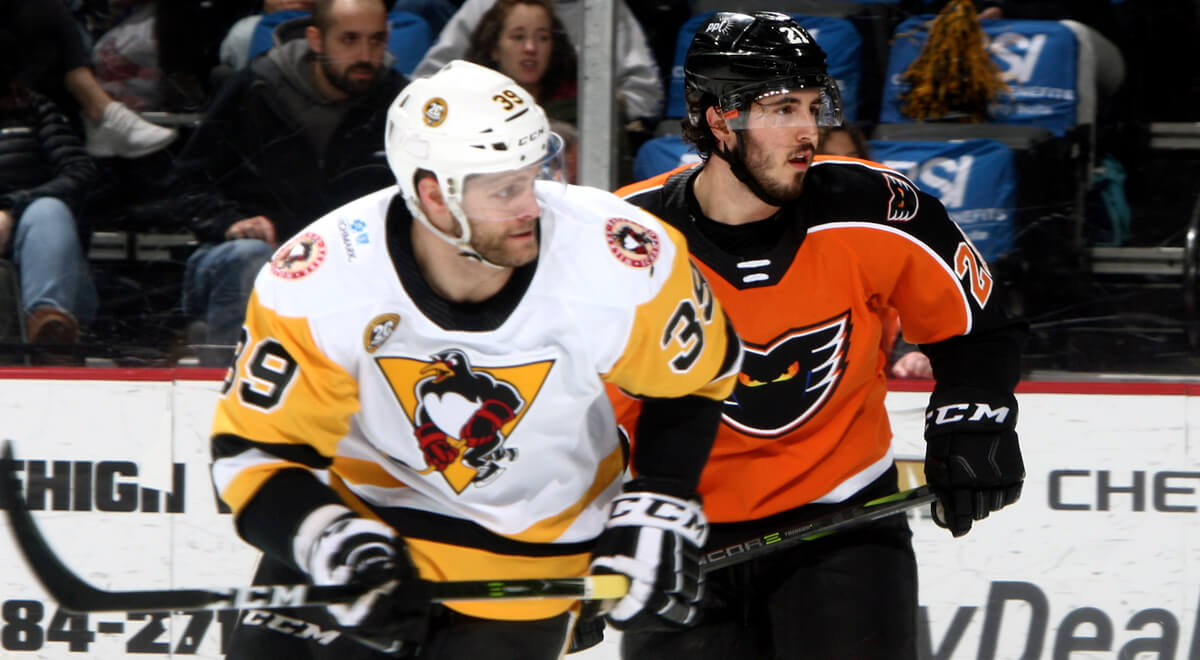 WILKES-BARRE, Pa. – The Wilkes-Barre/Scranton Penguins came up short against the Lehigh Valley Phantoms on Saturday night, falling in a 4-2 loss at PPL Center.

Brandon Hawkins scored for the second night in a row, giving him two goals in his first two AHL games, but Wilkes-Barre/Scranton (35-27-7-3) put itself in a hole by surrendering two shorthanded strikes to Cole Bardreau.

The Phantoms assumed an early lead with Tyrell Goulbourne deflecting a point shot past Tristan Jarry at 7:35 of the first period. Bardreau doubled Lehigh Valley’s lead on a shorthanded breakaway with 3:59 remaining in the opening frame.

Haggerty responded to Bardreau’s shorty by putting one to the back of the Lehigh Valley net during the same power play opportunity. Sam Lafferty weaved his way through the neutral zone and after turning two Phantoms penalty killers inside out, he located Haggerty at the left circle for a wicked one-timer that slashed the Penguins’ deficit in half.

Early in the second stanza, Adam Johnson split the Phantoms defense and snuck his own rebound past Alex Lyon, but the goal was waved off by the referee. Johnson’s effort did earn the Penguins a power play, but that only gave way to Bardreau burying his second shorthanded tally of the contest to give the Phantoms a 3-1 edge.

Midway through the third period, Byron Froese added to Lehigh Valley’s commanding 4-1 lead with a wrap-around.

Wilkes-Barre/Scranton proceeded to pepper Lyon with shots in a desperate attempt to get back in the game. Hawkins injected some life into the Penguins’ lineup when he collected a rebound and rifled it past Lyon for his team’s second goal of the game at 14:22 of the third period. Unfortunately for the Penguins, they failed to light the lamp any more after Hawkins’ tally.

Jarry turned aside 19 of 23 shots faced in defeat while Lyon made 33 saves for Lehigh Valley.

Wilkes-Barre/Scranton gets a chance at revenge tomorrow, Sunday, Apr. 7, as its next game is once again at PPL Center against the Lehigh Valley Phantoms. The Penguins’ next home game is Saturday, Apr. 13 against the Bridgeport Sound Tigers. Puck drop between the Penguins and Sound Tigers is scheduled for 7:05 p.m.