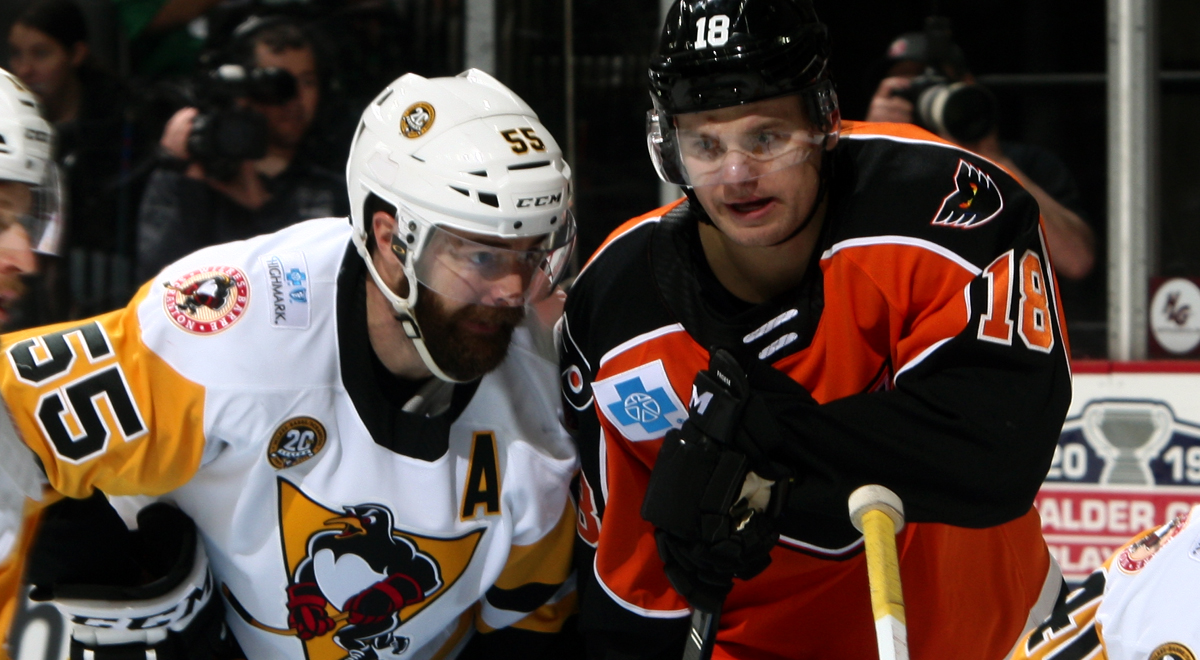 WILKES-BARRE, Pa. – The Wilkes-Barre/Scranton Penguins and Lehigh Valley Phantoms engaged in a throwback game of heavy hits and high scores on Sunday, but the Phantoms emerged victorious by a 10-6 final at PPL Center.

Wilkes-Barre/Scranton (35-28-7-3) put forth frenzies of quick-succession scoring early and late in the game. However, the Penguins failed to keep pace with the high-flying offense of their PA Turnpike Rival.

The Penguins started off on the right foot, scoring twice in the first 62 seconds of the contest. Jake Lucchini popped in a rebound on the first shift of the game, and Sam Miletic did the same mere moments later.

Lehigh Valley proceeded to rattle off three goals in less than four minutes, starting with a snipe by Greg Carey at 5:01 of the first period. Chris Conner tacked on the tying and go-ahead goals for Lehigh Valley, including a controversial play during which Penguins goalie Tristan Jarry became entangled with a Phantoms forward at the net-front as the puck trickled across the goal line, but the referee decided to let the goal stand.

The Phantoms extended their lead to 4-2 late in the opening frame on a power-play goal by Connor Bunnaman at 18:24.

John Muse replaced Jarry at the start of the second period, but Lehigh Valley snuck one past Wilkes-Barre/Scranton’s back-up goalie four minutes into Muse’s tenure. The Penguins clapped right back, scoring 22 seconds later. Jon Lizotte notched his first pro goal while making his AHL debut, pulling Wilkes-Barre/Scranton back to a two-goal deficit.

Carsen Twarynski tacked on another power-play goal for the Phantoms midway through the second stanza, and Nic Aubé-Kubel made it 7-3 with a breakaway conversion before the end of the period. Lehigh Valley then assumed a commanding 8-3 advantage at 2:33 of the third.

The Penguins made the improbable seem possible by uncorking three goals in swift fashion during the final frame of regulation, with Chris Summers, Lucchini and Ethan Prow all scoring in less than three minutes. The outburst of offense pulled Wilkes-Barre/Scranton within two goals while 14 minutes still remained in regulation. However, the Penguins couldn’t muster any more scoring, and a penalty shot goal by Twarynski along with an empty-netter by Colin McDonald put the game to bed for Lehigh Valley.

The Penguins thrust 49 shots on goal during the contest, but Alex Lyon recorded 43 saves for the Phantoms. Tristan Jarry registered nine saves on 13 shots before being replaced by Muse, who denied 13 of 19 shots faced.