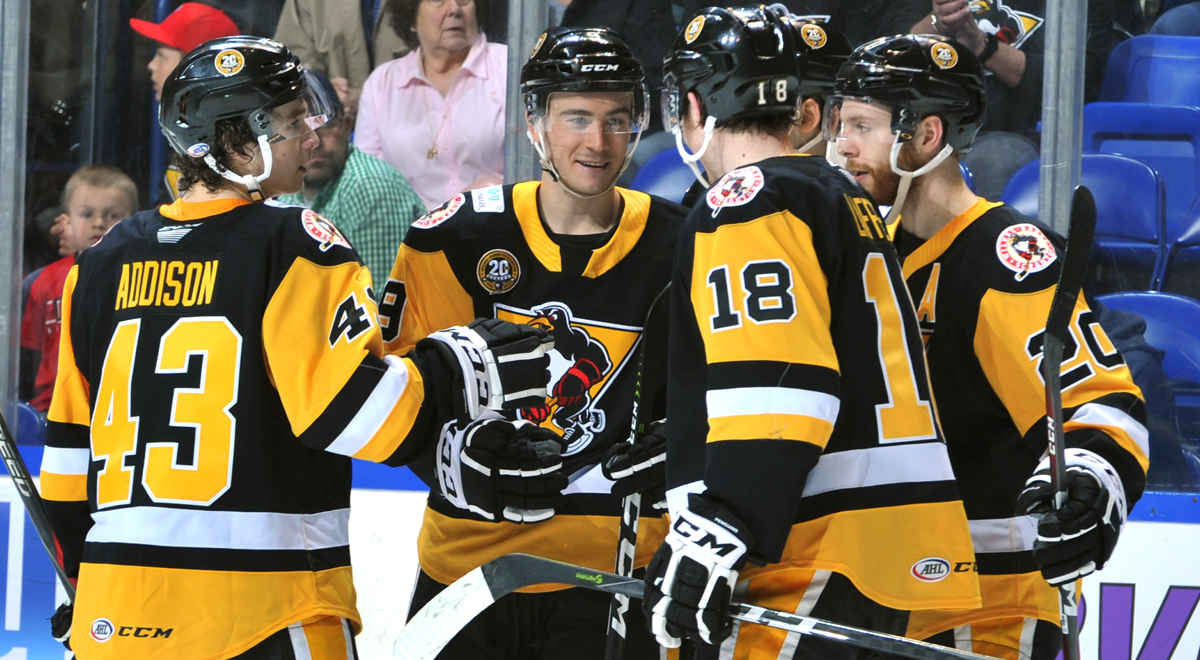 WILKES-BARRE, Pa. – The Wilkes-Barre/Scranton Penguins closed out their 20th season in tidy, convincing fashion by defeating the Binghamton Devils, 5-2, on Sunday at Mohegan Sun Arena at Casey Plaza.

Wilkes-Barre/Scranton (36-30-7-3) received three points from Sam Lafferty (1G-2A) along with a two-goal performance by Cédric Lacroix skating in his AHL debut.

The Devils found the back of the net first with a goal late in the opening frame. Nick Lappin ripped a shot from the top of the left circle which was tipped in by Ryan Schmelzer with 1:49 left before the intermission.

The Penguins erupted for three goals in a span of 3:16 starting with Lafferty’s snipe over the glove of Logan Thompson at 11:22 of the second period. Lacroix and Sam Miletic added a strikes a mere 12 seconds apart to obtain a 3-1 lead.

The Penguins added a pair of goals in the third period for good measure, the first of which arrived 2:10 into the frame from Jake Lucchini on the power play.

Lacroix earned his second goal of the night midway through the third period, pushing a loose puck across the goal line for a 5-1 lead. Lacroix’s second tally came with an assist to Yushiroh Hirano, who was also skating in his AHL debut. Hirano became the second Japanese-born player to suit up for an American Hockey League game and the first Japanese skater to record a point by virtue of his assist on Lacroix’s third-period insurance marker.

Binghamton tacked on a man-advantage maker with 5:26 remaining in the contest, but inched no closer toward earning a comeback.

Matt O’Connor denied 31 shots in the victory for the Penguins. Thompson turned aside 22 of 27 attempts faced for the loss.

Season ticket packages for the Wilkes-Barre/Scranton Penguins are available by reaching out to the Penguins directly at (570) 208-7367.

Fans can also keep up with the Penguins through the AHL’s brand new high definition streaming service, AHLTV. Subscriptions for AHLTV during the Calder Cup Playoffs are available now. Fans can visit theahl.com/AHLTV now to register for a free AHLTV account and purchase 2018-19 subscriptions.