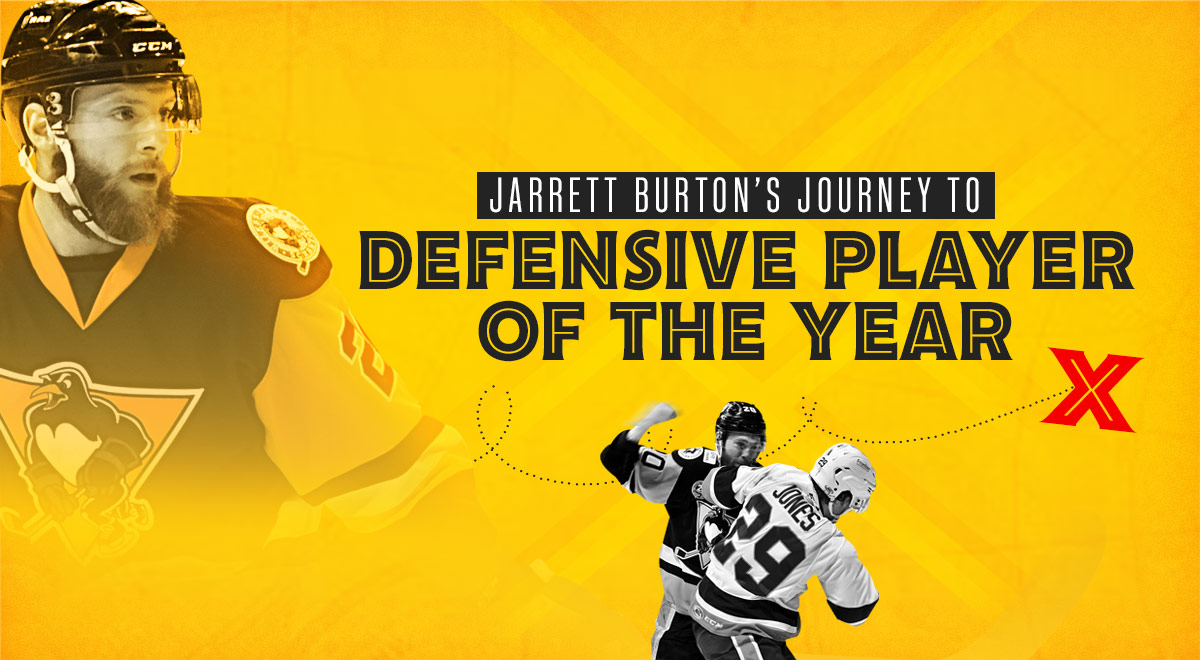 WILKES-BARRE, Pa. – The Wilkes-Barre/Scranton Penguins annual end of season awards ceremony was held prior to the team’s contest against the Bridgeport Sound Tigers on April 13, honoring those players who have made an impact, both on the ice and off.

Most of the honorees seemed like solid matches for their categories. The affable Kevin Czuczman garnered the team’s media award; Chris Summers was honored for his work in the community; Ryan Haggerty’s goal scoring earned star of the year honors; and goalie Tristan Jarry took home fan favorite and team MVP.

But at first glance, one of the awardees seemed just a tad mismatched with his designation.

Jarrett Burton was named Defensive Player of the Year for the Wilkes-Barre/Scranton Penguins, becoming the first forward to win the award since it was introduced in the 2015-16 season.

“It means a lot,” said Burton, who was selected on his strength in the face-off circle and penalty kill. “It’s not really a position you look to get accolades at, and it’s not a glorifying position. But it’s something I take a lot of pride in and making sure I am in really good spots in our own zone and penalty killing and trying to win face-offs. It’s a role I have been trying to be evolve into and it’s an honor to be rewarded for that.”

Although he was noticed for his efforts this season, they did not arise without years of effort and determination. Burton proved he was willing to put in the work, and thus earned himself well-deserved recognition in his professional career.

“It’s been a long [journey], it’s been a lot of fun though,” Burton said. “You look back and see where you were. I’ve been with Clark [Donatelli] a long time. He really helped me evolve my game and put me in opportunities to better myself as a hockey player and person.”

The 28-year-old skated with the Wheeling Nailers (ECHL) for all his rookie season in 2014-15 prior to making his AHL debut with the Penguins during the 2015-16 season. After three seasons of jumping up and down between the leagues, Burton found a steady place in the Wilkes-Barre/Scranton lineup this year.

“You can never get too comfortable in hockey, you never know what might happen, and I love it here in Wilkes-Barre,” the Sault Ste. Marie, Ontario native assured. “It was great to stay here for the whole season and I am happy to be able to call myself a Penguin.”

When asked about how he’s been able to earn a constant AHL roster spot, Burton focused on the importance of his improvements in the defensive aspect of the game.

“There are little details you can continue to pick up throughout each season, and obviously the coaching staff does a good job about staying on top of us about that stuff. I think trying to evolve into that mindset that if you do well defensively, you’ll be able to create some offensive opportunities for yourself. I try to think about that going into games and making sure I am good in my own zone and take it from there.”

When asked if he would like to return next season Burton stated with a grin, “I love the city and I love the organization and they treat us top notch. There is nowhere else I’d like to go.”