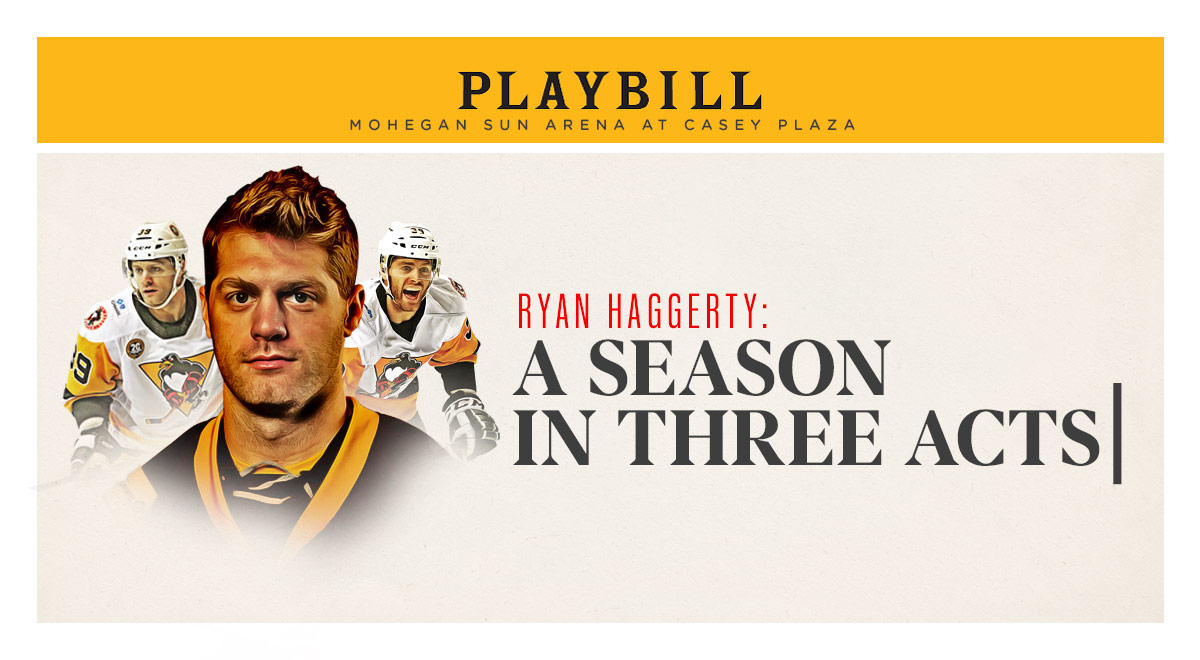 WILKES-BARRE, Pa. – A quick look at Ryan Haggerty’s statline from the 2018-19 season would suggest he had a fantastic season.

One might see his team-leading 23 goals and career-high 44 points and assume they came easily.

But they did not.

Haggerty’s third season with the Wilkes-Barre/Scranton Penguins was full of dramatic highs and lows. It featured wild swings of success and perils of confidence. It was unpredictable, exciting, tumultuous and captivating.

The more one reminisces on Haggerty’s big campaign, the more it becomes clear that his year can be divided into three distinct chapters. So sit next to the fire, lean back and bust out a calabash pipe, because you’re about to the read the tale of Haggerty’s 2018-19 season.

On Sept. 12, 2018, the Pittsburgh Penguins announced the roster for their upcoming training camp. There were a whopping 50 names included on the list of skaters that would be present on Day 1 of camp. Sprinkled among the list of superstars, bona fide NHLers, highly-touted prospects and free agent acquisitions from Europe were five players on AHL contracts.

Ryan Haggerty was among those five.

Call it a courtesy, call it a move made simply to fill out practice rosters, call it whatever you like. The fact of the matter was, Haggerty was flattered by the gesture, but made it abundantly clear that he was attending training camp to send a message.

“It’s a good feeling,” Haggerty said of receiving the training camp invite. “It’s a good place to show yourself and show how you play and what your game is. I think I did an extremely good job at that the past couple of seasons, but this year at camp, everything fell together.”

The AHL-inked forward quickly started making an impression. He showcased his open-ice speed and cannonading shot in the very first set of drills in camp. He then followed that by opening up some eyes during the intrasquad scrimmages that took place daily at the UPMC Lemieux Sports Complex in Cranberry, Pennsylvania.

Haggerty proved his performances in practice were no fluke when he started lighting up the Penguins’ preseason games too, scoring in both games he participated in and totaling three points.

“Everything just started rolling,” he said. “The confidence was high. I had a good summer and came in (to camp) in great shape. All that hard work paid off.”

Pittsburgh’s general manager, Jim Rutherford, saw Haggerty throughout the two weeks and felt that his performance merited some contract restructuring. Haggerty entered training camp with an AHL contract, but he left with a two-year NHL contract.

The stage was set for his best season yet.

Buoyed by the success he had in Pittsburgh’s preseason, Haggerty jauntily entered the regular season with Wilkes-Barre/Scranton. However, the good vibrations turned into frequent frustrations much sooner than anyone expected, especially not Haggerty.

The Stamford, Connecticut native started the 2018-19 snakebitten. On many nights, scoring chances were hard to come by. And when they did, there was always something keeping the puck from going into the back of the net. Impressive shot blocks, acrobatic saves, posts and crossbars all did their parts to keep Haggerty from scoring. There were even instances where Haggetry was announced as the goal-scorer on a play, only to have his tally redacted and awarded to a teammate who had a subtle tip or redirection on the shot’s way to the back of the net.

The dry spell lasted far longer than anyone could have foreseen given the way Haggerty performed in the preseason.

“Once we got here, it seemed things had changed. Things kind of went sideways for the next couple months,” said Penguins assistant coach Jarrod Skalde. “We wanted to show him video, we wanted to encourage him, but you have a firm hand with him also… It was about getting back to his drive, his competitiveness, playing as a power forward and taking pucks to the net.”

The bad luck persisted for so long that the right-handed sniper almost went an entire calendar year without scoring a regular season goal for Wilkes-Barre/Scranton. With his last goal coming as part of a hat trick performance on Jan. 12, 2018, Haggerty’s drought finally came to end on Dec. 7, 2018, the lone strike in the Penguins’ 1-0 win against the Cleveland Monsters.

Things were not immediately hunky dory after that game-winning goal in early December, but at least Haggerty could breathe a sigh of relief. That long chase for the first goal had finally come to an end, and it could no longer weigh on his conscience.

“Every player goes through bad stretches, but you become stronger and learn to stick with it,” he said back in February before a game against the Hartford Wolf Pack. “You have to keep grinding away and keep working on the little things that got you to where you are in the first place… You know what? It’ll go in eventually.”

The New Year provided a reset button on Haggerty’s season, and that reboot proved to be the jolt needed to not only return to the standard he set in training camp, but even surpass it.

As Haggerty noted, if you play the right way (and happen to have a shot as incredible as his,) the puck will go in eventually.

Haggerty’s hard work and resilience started to pay off toward the end of 2018. He netted a hat trick (the second of his Penguins career) on December 15 against the Lehigh Valley Phantoms, and tallied twice on Jan. 4 vs. Grand Rapids.

But his scoring touch returned in earnest a few weeks later, when he rattled off goals in three consecutive contests (Jan. 23-Feb. 1). He then strung together a four-game goal streak in the middle of the month, and was back on track.

“When you get going and you’re starting to feel it, that confidence, it becomes a different feeling,” Haggerty remarked. “You’re a little lighter. You’re a little faster. I think you see things a little bit quicker. When that starts happening, good things tend to follow.”

Good things started piling up for the 26-year old forward, with 19 of his 23 goals on the season arriving in the final 38 games played. That’s a pace of a goal-per-every-other-game, production in same class as players who placed in the Top 10 of league goal-scoring. Plus, he had 12 points (7G-5A) in his final 10 contests of the year, and ultimately led the Penguins with six game-winning goals.

Put the stats aside. In layman’s terms, all of that means he realized a dramatic turnaround from where he was mere months prior.

“I thought he was a dominant force for us,” said Skalde. “He was working in practice, it translated to work in the games. It all comes down to his work ethic and drive. When he puts all those things together, he becomes hard to stop.”

Some teams would argue that it made Haggerty impossible to stop.

Despite his snakebitten start to the 2018-19 campaign, he eventually gnashed his own teeth in response and rode a wave of momentum and confidence to the best statistical output he’s ever experienced in his five-year professional career.

Ryan Haggerty’s saga this season was an exhausting one, as you can imagine. Going from the sense of pride that comes with earning an NHL contract to the emotional depths of going 11 months without scoring, back to sky-high confidence as one of the league’s top offensive threats only to miss the playoffs at the end of the year.

Whether anyone cares to admit it or not, that wild range of emotions can be draining. More importantly, missing the postseason is disappointing.

Still with one year left on the NHL contract he inked back in late September, Haggerty now sets his sights on preparing for another showstopping season with the Penguins.

“I’m looking to put myself another step or half step in front of where I was last year at camp,” he said. “I think that will be a really good spot for me. It’s going to be a busy summer, a lot of work, but I’m looking forward to the challenge.”