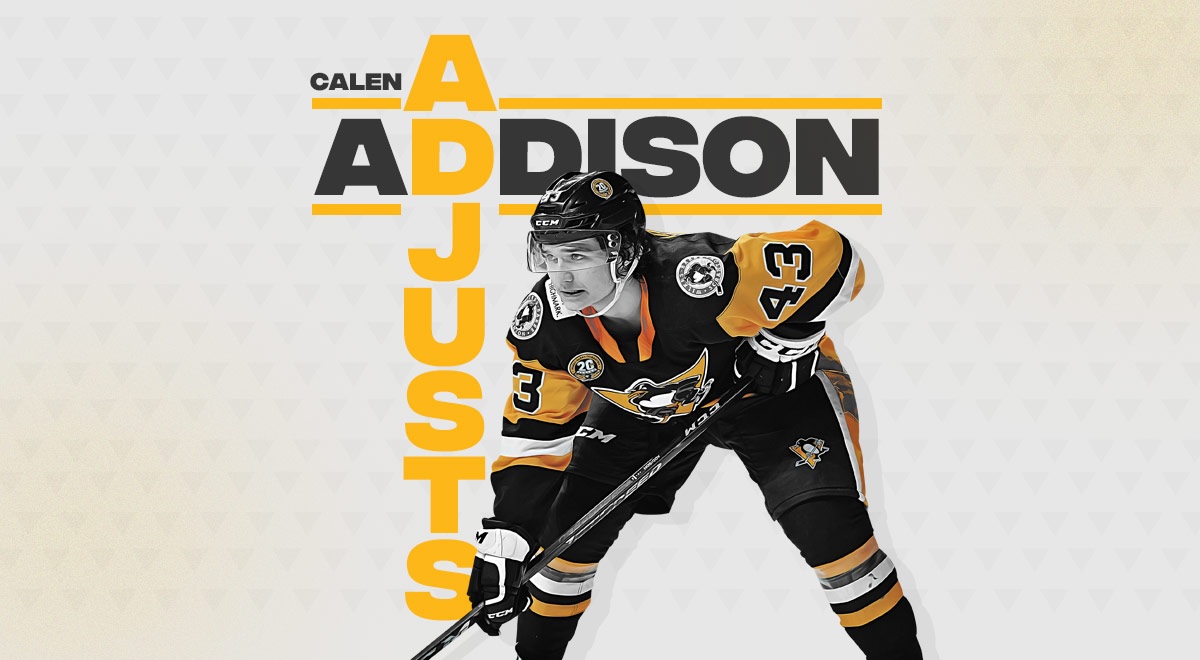 Addison’s 18-year old mind was set on attending hockey practices, going to the gym, and stressing about making the right play. Or dodging grown men determined to knock him into the fifth row.

Addison joined the Wilkes-Barre/Scranton Penguins near the end of the 2018-19 season after completing his third campaign of major junior hockey with the Lethbridge Hurricanes (WHL).

Going from the WHL to AHL is not a small step:  the game has some major differences and the rosters are filled with talented players of all ages, including some more than 10 years older than Addison.

When asked what aspect of the game underwent the biggest change from juniors to the pros, Addison was quick to say, “The speed and physicality. It’s way faster and harder hockey and definitely the smarts of all the players too.”

Despite the big jump in skill level, Addison was able to compete at the pro level and appeared in three games for Wilkes-Barre/Scranton.

“The more you play, the more comfortable you get and the more confident you get,” said the 5-10 Addison. “I think that’s a part of how you play. I think it was good for me to get into these games and see how fast and hard the hockey is.”

It’s a good thing that Addison had the chance to get his feet wet in his brief stint with Wilkes-Barre/Scranton this season, as confidence plays an important role in a player’s ability to perform. Pittsburgh’s first pick at the 2018 NHL Entry Draft is no different.

“The more confidence and more comfortable you get, the better you play and the more you feel like yourself out there,” Addison said. “That’s kind of how it went here. As the third game came along, I felt more comfortable with the puck and made plays I usually do.”

The first game in the AHL was a trial. The Lehigh Valley Phantoms made a point to put to the 18-year-old blueliner in their crosshairs and levied hit after hit after hit. But every time Addison got knocked down, he popped right back up.

Eventually, as he re-calibrated to the stiffer competition, he spent less time on his back and more time generating offense.

The youngster collected two points, both assists, in his three games with Wilkes-Barre/Scranton. His first pro point arrived in just his second AHL game.

“It was pretty cool,” he reminisced. “Something you dream about your whole life is playing pro hockey, and just to get a point on top of that is pretty cool.

More than adjusting to a new style of play, he had to adjust to a new locker room. Up to this point he had always played with teammates in the same age range. Stepping into a locker room with players that are 24, 25, 26, even 31-years-old was a big change for the teen.

“It was a lot different, but they were so good at welcoming me here,” he said. “They made me feel like I was at home and make me feel comfortable. It made it so easy to come here and transition to pro hockey, and I can’t thank them enough for making it so easy.”

Addison joined the Penguins on Apr. 5 when there were only six games left in the season. Knowing there were few games remaining on Wilkes-Barre/Scranton’s schedule coupled with the fact that every game left on the slate had postseason implications, Addison had to make the most of every shift he was given. So ultimately, he used his time in the AHL not only as an education on pro hockey, but also to focus on the little things.

“[My job here was to] just be myself and play my own game. Definitely focus making sure I was defending hard and making plays like I usually do and just be confident with the puck.”