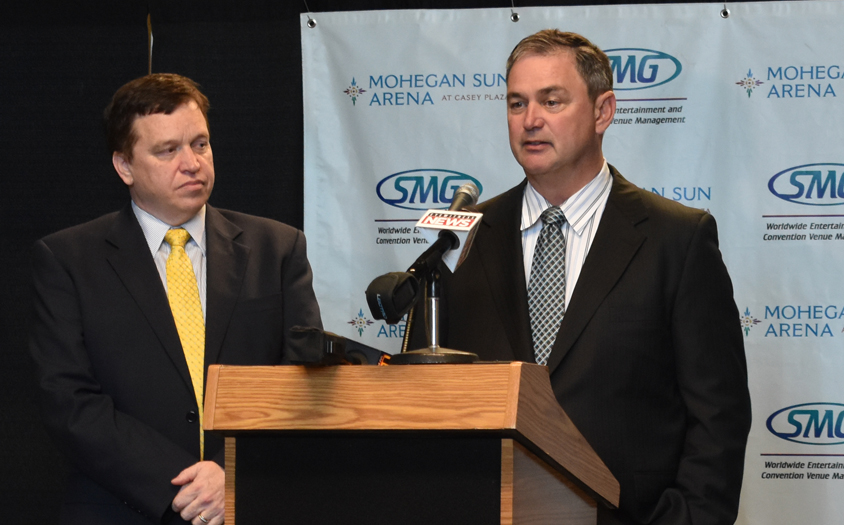 The Luzerne County Convention Center Authority, which oversees the management of the Mohegan Sun Arena at Casey Plaza, unanimously approved a new 10-year agreement with the Pittsburgh Penguins to keep their American Hockey League affiliate in northeast Pennsylvania on Wednesday afternoon.

The deal, which was months in the making, was announced at a press conference this afternoon at the arena.

“What w’eve agree upon is a contract both parties are happy with, one that treats the Penguins as our partner, not just our tenant,” Authority Chairman Gary Zingaretti said.  “We’ve fundamentally changed the way we’ll do business [with the Penguins] over the next 10 years, and we’ll be working closely on advertising, sales and capital projects in the building.

“It will truly be a cooperative approach.”

Both sides have committed to investing heavily in capital improvements for the arena.  The Penguins will be spending nearly $900,000.00 for updates to locker room facilities and back of house areas, while the authority will be paying for a new LED lighting system, the addition of a ribbon board, and other mutually agreed upon future projects – all aimed at improving the fan experience for games and other arena activities.

“None of this spending would be possible if not for the 10 year commitment with our anchor tenant/partner,” said Zingaretti.

The extension between the arena and the team wasn’t the only news to come out of the press conference though.  The arena has approved a 10-year extension in their management agreement with SMG to run the building, and with Savor to provide food and beverage.

Additionally, the board announced that it has hired Will Beekman to serve as the arena’s new general manager.  Beekman takes over from Brian Sipe, who left earlier this Spring for an opportunity at Rupp Arena in Kentucky.

Beekman, who has served as the director of the F.M. Kirby Center in downtown Wilkes-Barre, began his career with the Penguins in 2002.

“It kind of feels like a homecoming for me,” he said.  “I think it’s a great thing for this area that the Penguins are staying in town.  I think if I was to walk in the door at the same time they were walking out, it would feel like something is missing.”