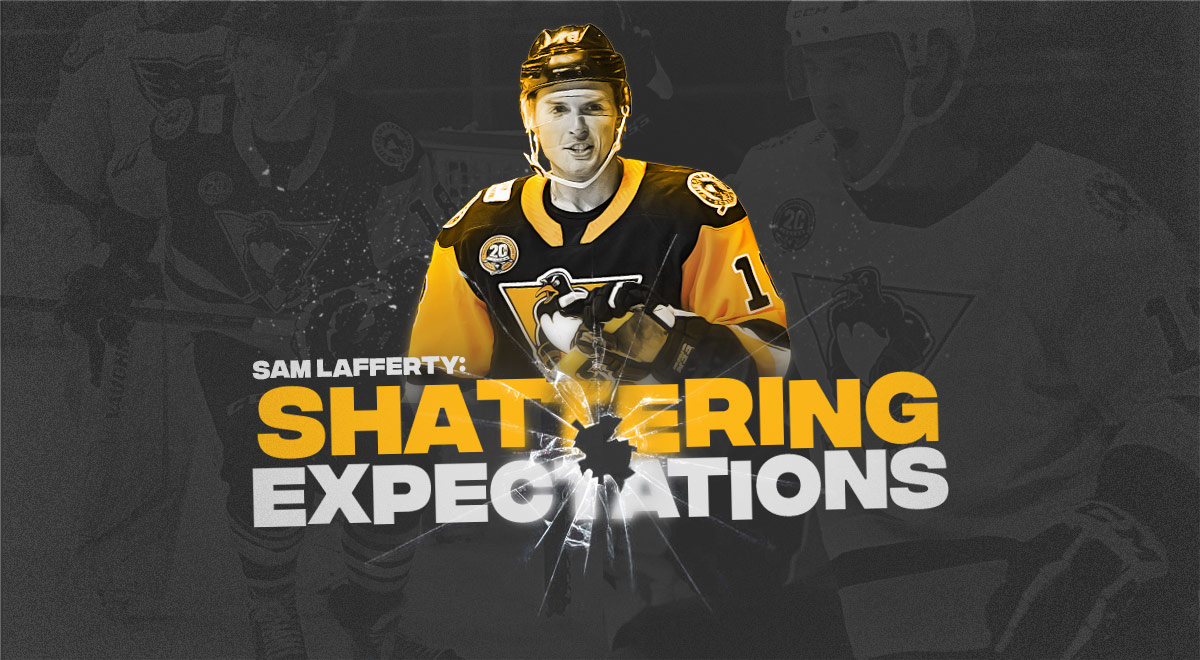 WILKES-BARRE, Pa. – By the end of the 2018-19 season, everyone of the Wilkes-Barre/Scranton Penguins’ opponents knew the name Sam Lafferty. They learned to hone in on him in pre-scout meetings, they tried to shut him down on the ice, and there’s a good chance that at the end of the night, they had to read his name on the boxscore, as well.

Teams quickly found out that the Penguins’ rookie forward was going to be a threat, but it didn’t start that way. In fact, even Lafferty didn’t foresee this level of success for himself at the get-go.

When Sam Lafferty showed up in Northeastern Pennsylvania before the start of this season, he set some modest goals for himself before embarking on his first full season as a professional hockey player. His aim was merely to scratch and claw for the chance to prove himself and nothing more.

“Honestly, I came in just wanting to play hard and earn my ice time,” Lafferty said. “That was really my only expectation.”

If ice time was what he wanted, he got a lot of it. And with those extra shifts, he continuously shattered those unassuming expectations.

By the end of his rookie campaign, Lafferty amassed 49 points. That placed him second on the Wilkes-Barre/Scranton Penguins and most by the team’s forwards. Furthermore, his 36 assists topped the team and tied him for fourth among league rookies.

“His season, his development, it was great to see,” said Penguins head coach Clark Donatelli. “It’s not like the moment he stepped on the ice it all happened for him at once. There was a progression.”

His individual success in the first half of the season came and went in waves. Bursts of offense were followed up by extended dry spells. This is not out of the norm for young players navigating the waters of pro hockey for the first time, but eventually, he started to set himself apart from his peers.

“He got better and better throughout the year,” said Penguins assistant coach Jarrod Skalde. “Once he figured out the league, you know, he just pushed himself so hard in practice every day that that became his norm.”

The norm became impressive playmaking performances by Lafferty on a regular basis. The Hollidaysburg, Pennsylvania native’s offensive acumen allowed him to also top the team in multi-point games, putting up two or more points 14 times over the course of his 70 games played.

Several of his finest showings of the 2018-19 campaign took place in the last four weeks of the season when he and his linemates, Sam Miletic and Ryan Haggerty, went on an absolute tear together. Unforgettable games from Lafferty include his hat trick and four-point night in a comeback win at Lehigh Valley, putting on a two-way clinic in a shutout victory at home over Providence, and he made a craterous impression of what’s to come in his dynamic three-point outing in the team’s season-ending win against Binghamton.

“I thought he just had a tremendous season, and it all culminates in that last game of the year,” Skalde said. “I thought he was a dominant force. He was the best player on the ice for either team.”

After that “dominant” finish to the season, Lafferty reflected on his rookie year and how much he grew from that kid who just wanted to earn his ice time back in training camp.

“The biggest lesson I learned was the consistency,” he said. “Day-to-day, game-to-game, now I know exactly what it takes to be successful day-in and day-out.”

Lafferty wants to take that lesson and apply it to his offseason preparation for his sophomore season as a pro. The coaching staff of the Penguins has little doubt that he’ll be returning to training camp with a purpose.

“His determination, his drive, his singular focus towards getting to the NHL was impressive,” Skalde said. “He’s an absolute joy to have as a coach, because he wants to get better every day, and he shows it. He really wants to improve on a daily basis. He shows you what he wants to become.”

What does he want to become? An NHLer, of course.

Selected in the fourth round by the Pittsburgh Penguins in the 2014 NHL Entry Draft, recent analytics suggest that Lafferty had roughly a 20 percent chance of making it to the NHL and an even lower probability of logging 200 career NHL games (approximately eight percent). However, based on his hallmark work habits and the highlight reel he put together in his rookie season in Wilkes-Barre/Scranton, he might end up shattering those expectations, too.