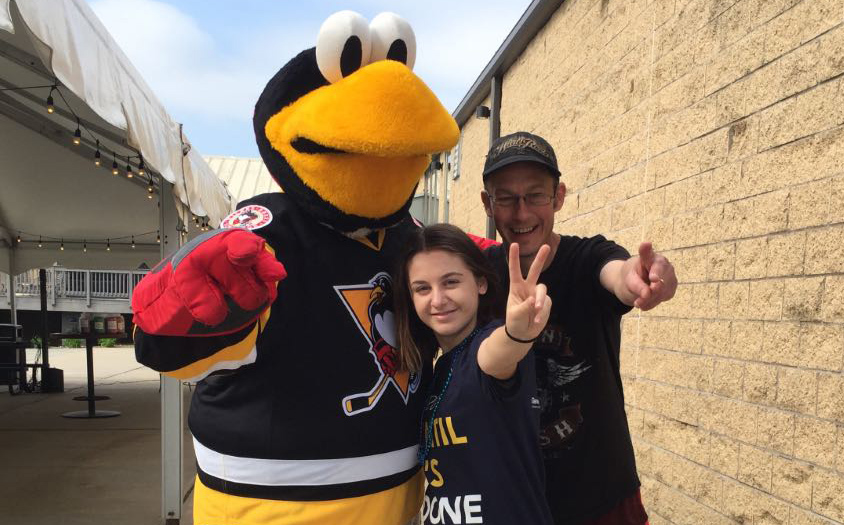 Hi Penguins fans, and welcome back for this week’s episode of Tux on the Town.

During my visit to help them celebrate the anniversary, I started out by dancing and waving to traffic driving by and lured in quite a few customers who had no idea what was going on but wanted to stop to say hi to me and hang out.  After I enticed numerous other guests into the party, I then made my way inside to interact with the guests.  I was my usual silly self, making people laugh and smile and of course posing for photographs.  I also was fortunate enough to take a picture with the owners of the company to help commemorate the milestone. I also once again got some more media coverage from the Citizen’s Voice.

Saturday May 18th was another busy day for me and it started out with a visit to another sponsor of the Wilkes-Barre/Scranton Penguins, Odyssey Fitness.  Once again I am proud to support our sponsors by embracing them with my presence.

I attended Odyssey Fitness’s Kid’s Program on Saturday May 18th because this was the final day of their program.  I was there to help them celebrate their final day and it was a fantastic surprise before they finished up their program until they return in the fall.  To start off the visit, I led the children in some stretching.  After the stretching, we went outside and played some soccer.   Soccer isn’t my best sport and they made me look like a fool but it was all in good fun.  After the game of soccer, I handed them their certificates for completing the program and we took some photographs and signed some autographs.

Right after the Odyssey appearance, I had to make my way down I-80 to Danville to attend the 7th birthday party of Kendal Comstock.  As I got off the interstate, I pulled into Midway Lanes parking lot and I was ready to make a 7 year old Tux fanatic a very happy camper for her birthday party.  Once I entered into the building, I heard one of the children yell, “Tux!” I turned around and pointed at myself (as if I didn’t know I was supposed to be attending the birthday party).  All the children came running up to me and gave me a great big hug!  After they gave me a hug, they led me to the lanes and were saying “Tux, bowl with us!” or “Tux, can you bowl?”

I hopped on a lane with the birthday girl and her friends and I threw a couple down the lane.  Just like I had discovered earlier that morning at Odyssey fitness, I need to stick to playing hockey.   We took a break in between games and had some cake and I helped them sing (I squeaked) happy birthday to Kendal.  Kendal had a very happy birthday party and I was glad I was able to help make her day.

After a quick nap in my igloo, I had to get ready for my  final appearance of the day at Meyers High School Stadium.  The event I attend that evening was called “Rally for Remedy.”  Rally for Remedy is an event supporting cancer.  Students form teams and come up with ways to raise money to battle cancer by selling items around the track of Meyers Stadium to those who attend the event.

I spent my time walking around the track and checking out all of the awesome items and creative ways that the students came up with to raise money for cancer awareness.  While I was walking around the track I ran into a buddy of mine…. Wilkes-Barre/Scranton Penguins Player and Shavertown native, Pat McGrath!! Pat was there showing his support to the students raising money for cancer awareness and also signing autographs for those in attendance.  I was delighted to see my buddy because I miss our players during the summer months.  After a few laps and interacting with the students and people attending the event, I called it a night.

Sunday morning the sun was shining and I was ready to go out and support another great cause!  I headed up I-81 to Montage Mountain to support the Cystic Fibrosis Foundation’s Great Strides Walk. Cystic Fibrosis is a genetic disease that causes lung infections and effects a person’s breathing abilities. The Cystic Fibrosis Foundation was founded in 1955 and is the main source for fundraising money to help try and find a cure for this disease.  This is the second year in a row I attended the walk and I’m happy to help support such a wonderful foundation and cause to help those in need.

I spent the morning greeting the guests and participants as they arrived at the walk.  I helped them get excited by dancing with them, making funny faces, and of course plenty of high fives and fist bumps.  I was there at the beginning of the walk and was high-fiving, giving fist bumps, and smiles to the participants of the walk.  I took a couple laps with them but I had to get back to the igloo to do some chores and igloowork because I was so busy with all of my appearances this week.

I’ll be back at it again next week so stay tuned for the next episode of Tux on the Town.  For more information on my appearances and to get me involved in your next birthday party, community fundraiser, or special event, check out my webpage by clicking here!