DEVELOPMENT CAMP NOTEBOOK: Matt Murray makes a name for himself 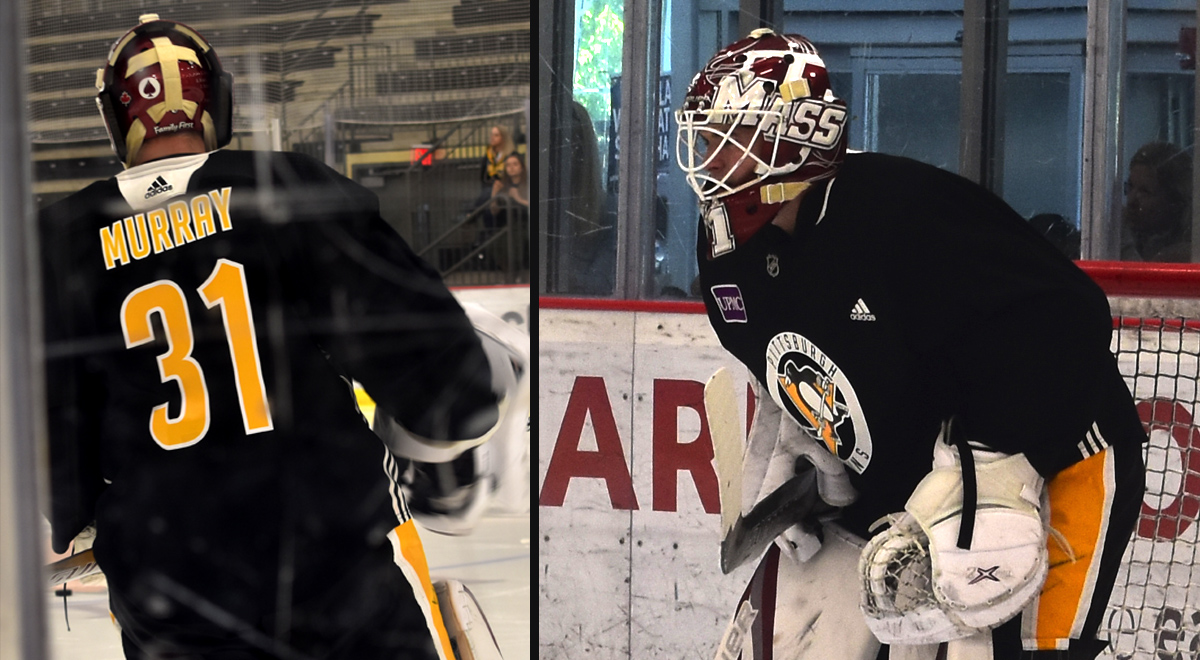 PITTSBURGH, Pa. – There’s no joke that we can open with that hasn’t already been made, so we’ll play it straight instead. Matt Murray is at Penguins Development Camp. No, not that Matt Murray, the other Matt Murray.

The 21-year-old goaltender from the University of Massachusetts has heard it all at this point. For years now, his teammates have teased him about the fact that he shares a name with the accomplished Penguins goalie. When UMass Murray was named to the Development Camp roster, social media was abuzz with a combination of laugher and genuine confusion.

Then, his media availability after the first practice at Development Camp included a lot of those same jokes again.

“It’s fun, I’m used to it,” Murray said when the obvious questions about him name arrived. “It’s a good topic of conversation… It’s quite common in my daily life.”

The similarities don’t span much farther beyond their name and position, though. The Matt Murray you already know is a tall, lanky six-foot-four. Development Camp Matt Murray is a solid-bodied six-foot-one. One Matt Murray was a third-round draft pick and a two-time Stanley Cup champion, the other Murray is an undrafted free agent.

Don’t let the new Murray’s meager size and contract status fool you. The St. Albert, Alberta native is coming off a strong sophomore year at UMass, during which he posted a 20-5-0 record, a .919 save percentage and 2.11 goals against average.

During the season, Murray caught the attention of Penguins scouts and staff, particularly the team’s Director of Player Development, Scott Young.

“UMass obviously had a heck of a team this year, but we also saw [Murray] when UMass didn’t play at their best,” Young said. “He stole them some games against some really good teams. One in particular was a weekend against Providence. They swept Providence, and they really had no right of doing that, but he stood on his head.”

The Development Camp schedule has allotted 30 minutes of ice time every day for goalies to face shooters and get one-on-one time with the goaltending coaches, Mike Buckley and Andy Chiodo. Young and the rest of the Penguins brass will be watching from above during these sessions, keeping a keen eye on Murray’s performance.

During those sessions as well as the full team practices and three-on-three tournament at the end of the week, Murray hopes the Penguins’ management likes what they see. People can politely banter with name games all they want, but Murray is focused in on making sure that everyone leaves with a positive impression of this Matt Murray, too.

“They say you’ve got to come here and make a name for yourself, but mine’s already taken,” he said. “I guess I’ve got to add to that and at least do my part so I’m recognized when they hear that name, as well.

Another goaltender of note at Development Camp is Emil Larmi. Larmi was signed as an undrafted free agent out of Finland after winning the league championship this year with HPK.

Larmi is listed at only six-feet tall, but he looks a lot bigger than that in net. There’s a certain “thickness” to him, and whether that’s a result of technique or equipment (or most likely both,) it’s very effective, especially when compared to the smoothness with which he navigates the crease.

Jonathan Bombulie asked Larmi about his thick standing in net and if that’s how he combats being a smaller goaltender, and Larmi responded, “I eat enough.” It got a big laugh from the media contingency.

Thing is, Larmi isn’t that rotund of an individual when his gear is off, he’s just joking around. Despite a slight language barrier, Larmi was cheerily engaging reporters, and even tossed in another joke about fellow Fin Niclas Almari having to hold his hand once they got off the plane.

Larmi hasn’t played a minute for the Penguins yet, but I could easily see fans gravitating towards a personality like his very quickly.

Wilkes-Barre/Scranton fans will remember Brandon Hawkins from his ATO stint with the club late last season. They’ll likely remember his shot, too.

Hawkins is at Development Camp on an American Hockey League contract, but was turning heads during practice with his shooting ability. He had a handful of bar-down snipes or some electric releases that missed the net but still had people saying, “Wow.”

In the aforementioned goalie sessions, Hawkins was among the shooters that went out to run drills with the tenders at Development Camp. I asked him how the coaching staff went about picking the shooters for those drills, and he responded frankly, “I just kind of hopped out there.”

“I saw that there were four shooters in the early group, then only three guys suiting up for our session, so I got dressed and went out with them. An extra chance to showcase my shot couldn’t hurt either, could it?”

No, it certainly could not.