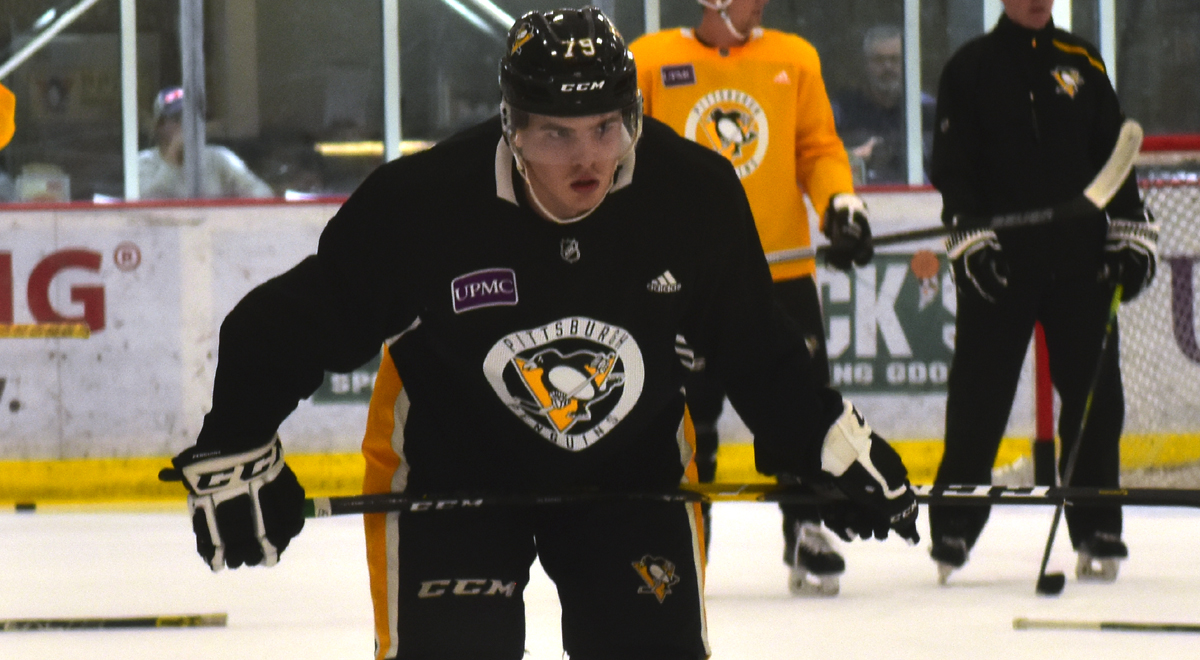 Almari showcased the smoothness of his play during the skills session of today’s Development Camp practice, demonstrating the kind of subtle footwork and touch on his passes that make modern D-men so effective in today’s game. It takes a drill or two to identify Almari’s talents, but once you see him flawlessly execute the patterns and puck-movements that the coaches at Development Camp are looking for, it becomes impossible not to appreciate what he brings to the table.

J.D. Forrest coached Almari a year ago when he had a brief stint with Wilkes-Barre/Scranton at the end of the 2017-18 campaign, and has seen growth in his steady style.

“He’s efficient, and I think he’s getting a little more confident in his game,” Forrest said. “He’s more powerful now. So with that smoothness, he’s got explosivity to him.”

Forrest also pointed out that the run that Almari went on with HPK to the Liiga championship should do wonders for his development, too. Forrest, who played in the Liiga during his career, recognized the structure and heaviness to the pro game in Finland, and felt that a young man like Almari can only benefit from playing a role in winning a championship at that level.

Unprompted, Almari echoed Forrest’s sentiments and said that he added level of muscle since the last time fans saw him in Northeastern Pennsylvania.

Almari, who recently turned 21, is expected to bring his smoothness with him to Wilkes-Barre/Scranton next season. It might take a few games for Penguins fans to appreciate what the young blueliner brings to the table, but soon enough, you’ll give him your heart, make it real, or else forget about it.

Wilkes-Barre/Scranton fans will remember D’Orio from his brief stint with the Penguins at the end of last season. He appeared in one game with the club, becoming the second youngest goaltender in team history when he suited up against the Bridgeport Sound Tigers at 19-years-old. D’Orio was fresh off of an impressive QMJHL Playoffs before being put in the crease by the Penguins, and for him, the difference between the two levels was noticeable.

“There’s a big step, even if it’s playoffs in junior,” he said. “You see it in professional. It’s their job, so the play is quicker and the shots are more accurate than they are in junior.

D’Orio believes the experience he had late last season will help him in his preparation for the coming year, his first full season as a pro.

Trying to shake things up from the potential monotony of a Development Camp, the Penguins’ brass decided to host a “Top Chef” style competition between the prospects after practice today. Appropriately dubbed “Pens Chef”, the prospects were split into six teams of five and had 30 minutes to prepare two meals: a shrimp scampi and beef over fried rice.

Pittsburgh’s team chef gave the players guidance before sending them off on their own, while also providing a table of bonus ingredients that the players were free to incorporate into their dishes.

Bravely stepping to the judges’ table to taste meals prepared with raw meat, raw shrimp and raw egg (they really put their faith in these guys, didn’t they?) were PensTV’s Josh Getzoff and Celina Pompeani, along with former Penguin and current radio color analyst, Phil Bourque.

“I’m not gonna lie, when I saw our team, I didn’t feel too good,” Bellerive said. “But we did alright. We had a lot of fun. We were joking around the whole time, trying to be creative and spice it up any particular way we could. It worked out for us.”

The players were all given custom aprons for their assumed duties as chef, and then were told after the competition that they were free to take their aprons home with them.

“The apron is dynamite,” Berger said with a big smile. “I’m actually really pumped about that.”

Development Camp features a wide array of ages when it comes to the prospects on the ice. Some kids have just been drafted and are still 17-years-old, others are just starting the collegiate careers, and some have recently wrapped up college at 23 or 24.

Regardless of age or experience, none of the prospects in Pittsburgh this week are as physically developed as Jon Lizotte.

Lizotte stands taller than most of his cohorts on the ice in Cranberry, and one look at him in the locker room reveals that he’s filled out his frame more than anyone else here either.

The blueliner from Grand Forks, North Dakota plays a physical, shut-down style of defense this is aided by his physical gifts. Lizotte is confident that those traits will carry over to the professional level once he joins the Penguins in the fall.

“I feel like I’m very ready,” Lizotte said. “Those two weeks I spent in Wilkes-Barre certainly helped. It put an image in my mind of what [pro hockey] is about. I’m prepared for it, and I’m certainly ready to make that transition.”