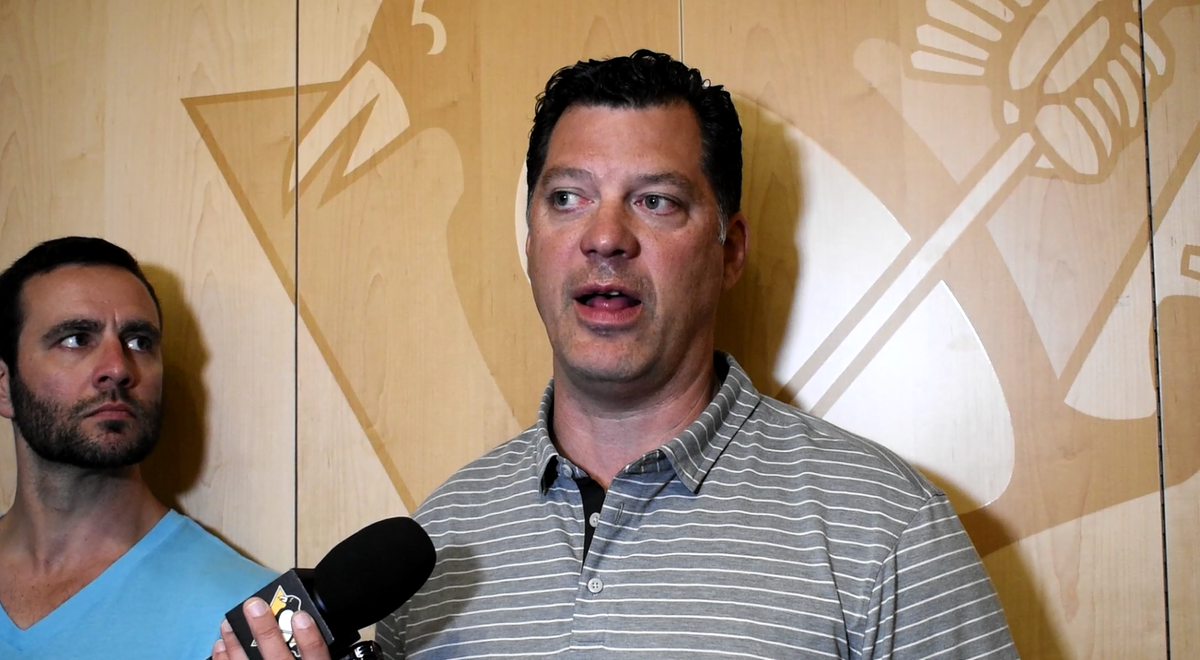 PITTSBURGH, Pa. – The news broke in the middle of the Penguins’ Development Camp three-on-three tournament, and while it may have caused a ripple in Pittsburgh, it shook the Richter scale in Northeastern Pennsylvania.

There’s a new coach in town, and his name is Mike Vellucci.

Vellucci comes to Wilkes-Barre/Scranton after winning the Calder Cup with the Charlotte Checkers this past year in the AHL. When Penguins general manager Bill Guerin learned that there was a possibility that the bench boss who lifted the Cup three weeks ago was becoming available, he knew he had to pounce on the opportunity.

“This just doesn’t happen all that often,” Guerin said. “I can’t really remember too many times this happening (a Championship-winning coach becomes available). We’re extremely excited to have the opportunity to get a guy like Mike.”

Guerin repeatedly expressed his excitement for the Vellucci acquisition during a press conference that was held after Guerin watched Emil Larmi and Team Jagr bested Team Lemieux in the final of the three-on-three tournament.

Vellucci steps in for Clark Donatelli, who spent the past three and a half season as head coach of the Penguins but resigned from the position for personal reasons on Thursday. Vellucci spent the past five seasons as the Assistant General Manager of the Carolina Hurricanes, but started pulling double duty as the Checkers head coach at the start of the 2017-18 campaign. In his two seasons behind the bench in Charlotte, Vellucci coached the team to a 97-43-8-4 record (.678) and went 5-1 in playoff series.

“[Vellucci] has been a very good coach for the last 25 years or so,” Guerin said. “He’s very accomplished at the American Hockey League level. We couldn’t ask for a better guy.”

And then he added one more time, for good measure, “We’re really excited.”

OTHER NOTES FROM DEVELOPMENT CAMP

• The three-on-three tournament provided an open-ice extravaganza for the Penguins’ prospects to go to work, and many of them seized the opportunity. Namely, all of Pittsburgh’s draft picks from this summer were noticeable. Nathan Légaré, Judd Caulfield, Valtteri Puustinen and Santeri Airola all scored at some point during the event. The only draft pick who didn’t score was first rounder Samuel Poulin, but he was visibly the most “complete” player of the bunch. He’s smart, he’s strong, he had good scoring chances but was an even better distributor, and concerns about his skating may have been a tad bit exaggerated. He’s good.

• You know who else is good? Niclas Almari. And he showed it again during this tournament.

• Michael Kim was a pleasant surprise during the tournament, a stalwart in all three zones for the Michel Brière Cup-winning Team Jagr. He was really flying out there, and he’s in incredible shape, too. Kim, who was signed to an AHL contract by the Penguins at the end of last season, could be a sleeper to make an impact on Wilkes-Barre/Scranton’s blueline out of training camp next year.

THANKS DAD – A LOOK AT HOCKEY FATHERS AND THEIR WBS KIDS