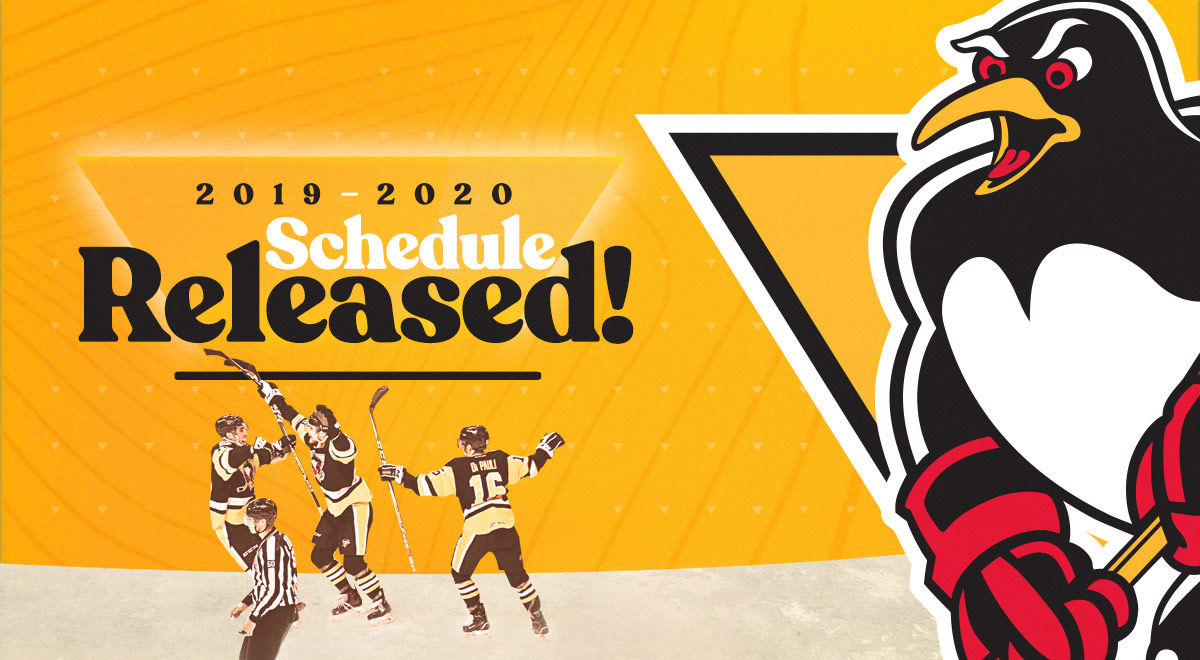 WILKES-BARRE, Pa. – The Wilkes-Barre/Scranton Penguins’ full 2019-20 schedule was released today by the American Hockey League, featuring all 38 of their home games to be played at Mohegan Sun Arena at Casey Plaza.

Under the guidance of new head coach Mike Vellucci, the Penguins will play a 76-game regular season schedule (38 home/38 road) featuring games against 12 teams in the Eastern Conference and an additional two opponents from the Western Conference.

Wilkes-Barre/Scranton will open its 2019-20 season on Saturday, Oct. 5 by visiting a bitter rival, the Hershey Bears. As it was revealed yesterday, the Penguins will host their home opener on Saturday, Oct. 12, when they face off with the Utica Comets at Mohegan Sun Arena at Casey Plaza.

The Penguins have added two new opponents to their schedule this season, both of which come from the Western Conference. The Central Division’s San Antonio Rampage and Texas Stars will visit Wilkes-Barre/ Scranton for two-game sets in October and December, respectively. The Penguins will then return the favor by traveling down to the Lone Star State in January.

This season marks the first time the Penguins and Rampage will go head-to-head since February 6, 2009, a game in which Wilkes-Barre/Scranton walked away with a thrilling, 4-3 overtime victory. The Penguins’ and Stars’ showdown at Mohegan Sun Arena at Casey Plaza on Dec. 6 will be the first ever meeting between the two clubs.

Twenty-nine of the Penguins’ 38 home games this season will take place on weekends, with 12 home dates on Friday, 15 on Saturday and two Sunday matinées.

Wilkes-Barre/Scranton’s longest homestand of the 2019-20 season is six games, starting with the New Year’s Eve tilt with the Thunderbirds and ends on Jan. 11 against Hartford. Immediately after that homestand, the Penguins will embark on a season-high six-game road trip in January, including their visits to Texas, San Antonio and the defending Calder Cup Champions, the Charlotte Checkers.