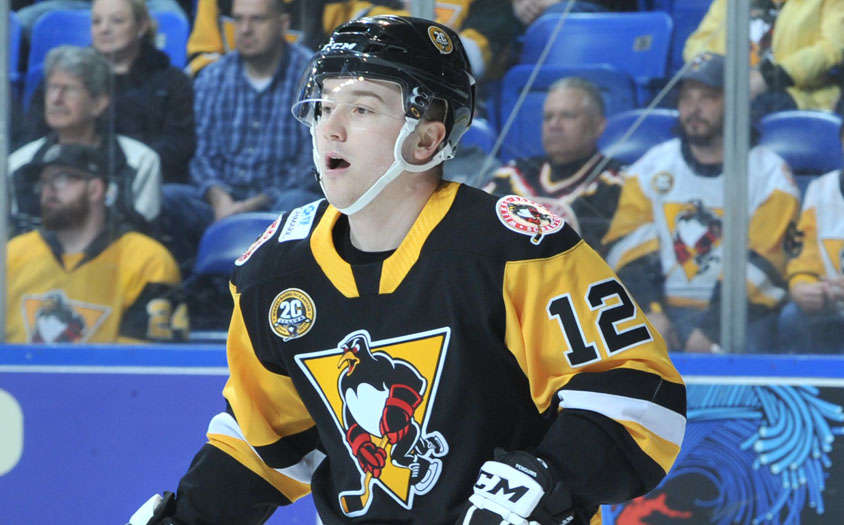 Every hockey fan loves a game with a lot of goals. Brandon Hawkins knows how to deliver lots of goals.

Hawkins came to the Wilkes-Barre/Scranton Penguins late last year on an ATO after a successful senior season at Northeastern University. He then swiftly made his presence felt by tallying in both of his first two AHL games. The sharp-shooting winger has had a wild ride that led him to turning pro at 24-years-old, including a transfer during his collegiate career as well as a background in roller hockey.

Learn all about Brandon in this Penguins Prospect Profile!

Q: Growing up in Macomb Township, Michigan, what was it like trying to pursue your dream of being a pro hockey player?

A: Well, to be honest, I played travel hockey all the way growing up, which is kind of a different journey than everybody else. Playing in travel hockey, you’re not always playing in the highest leagues or anything like that. So when I turned 17, I ended up playing for Little Caesars, and that’s how I kind of got my shot to play junior hockey.

So it doesn’t really matter what journey you take, you just have to keep with it.

Q: Your journey also included playing a lot of roller hockey. How did you end up in roller hockey, and how do you think it helped you become the player you are today?

Q: One of the hallmarks of Brandon Hawkins’ game is his shot. How much time did you spend growing up just practicing on your shot over and over again?

A: It was a lot growing up in my childhood, because my basement was built into a shooting room. So I shot a ton of pucks, day-in and day-out. And my favorite player that ever played was Brett Hull. He was known as one of the most notorious shooters to ever play in the NHL. I wanted to be just like him, so I tried too shoot the puck as much as possible, and be just like my idol at that point.

Q: How many pucks a day would you say you shot?

Q: The past few years, Northeastern University has churned out more than a handful of good NHL prospects, but even with all the turnover, the team still manages to stay on top. How did this past year go for you, accepting a bigger role and contributing to another great season?

A: I think a lot can be attributed to their recruiting. (Head coach) Jerry Keefe and (associate head coach) Jim Madigan, they do a wonderful job. And [Jason Smith], the assistant coach, does an unbelievable job, too. They kind of pulled me in the office before the summer before my senior season and said, ‘Hey, look, you’re going to have a lot of responsibility. We’re going to need you to step up.’ It kind of flickered in my mind that you’ve got to be the best you can be. I got that mindset early on in the summer and just tried to take advantage of it.

Q: You’ve got quite a few tattoos on you. Is that a reflection of your personality, trying to spread it out with body art?

A: Yeah, here and there. There are a lot that have meaning. Some that don’t. You know what, it’s kind of how I built my relationship with my buddy, Josh Vermeesch. He takes wonderful care of me, and we still hang out every time I’m home.

Q: How many tattoos do you have now?

Q: Do you have plans for any more, or are you stopping there?

A: There’s going to be a ton more! I planned to put my first pro team I ever played for on there. So hopefully I’ll add a Wilkes-Barre/Scranton one at some point soon.

Q: Speaking of Wilkes-Barre/Scranton, how do you think your experience late last season helped you prepare for what’s going to be your first full professional season this year?

A: I think it helped me a lot. I came in, and all the guys welcomed me in with welcome arms. It was really about feeling out the game for the first little bit, and then getting to know the guys, and getting to know the speed of the game. Eventually, I thought it panned out, and I thought I played pretty well while I was there.