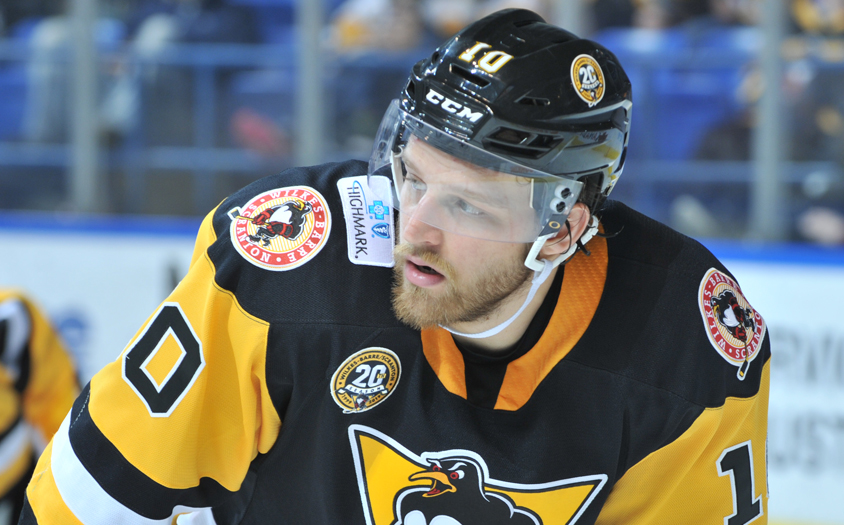 Hockey fans love bone-rattling hits and teeth-gnashing tenacity, but those traits aren’t limited to the ice. Those same kind of plays show up on the gridiron, too. Jon Lizotte can attest as much.

Given his imposing stature and defensive mentality, Lizotte was an accomplished linebacker back during his high school days, but ultimately, the North Dakota native decided hockey was the way to go. After a four-year career of knocking bodies at powerhouse St. Cloud State University, Lizotte joined the Wilkes-Barre/Scranton Penguins on an ATO near the end of the 2018-19 campaign. He scored a goal in his first pro game, and now he’s looking to carry that success into his first full professional season.

Learn all about Jon in this Penguins Prospect Profile!

Q: What is the hockey scene like in Grand Forks, North Dakota? Because when people think of hockey hotbeds in the United States, they think of Minnesota or New England. What’s is it like in North Dakota?

A: In North Dakota, it’s certainly on the up and up, especially with [the University of North Dakota] being in Grand Forks. It’s always been a huge thing. You know, for me growing up, it was all that we had for hockey besides watching Minnesota and stuff. It’s certainly a big thing up there, and a lot of kids look up to college athletes and stuff like that. That’s what I did as a kid.

It’s certainly getting better. All the competition up there, you can see people are going further and further every year. So it’s nice to see.

A: It’s certainly competitive across the state. It used to be kind of east dominant, but it’s even grown more western. Everyone’s competitive up there nowadays. It’s a lot of fun for all the kids to get to play in the state tournament. They’re all free on-site, kind of what everyone watches and stuff. It was always a fun time getting together with all your friends at that time and playing together and having those big student sections. It was a lot of fun, and it’s certainly still going up and up.

Q: You play a pretty physical brand of hockey. Where does that come from? How did you develop that over time?

A: I’m not really sure where it came from, exactly. It’s just kind of my mentality. I think I enjoyed all the contact sports– football and stuff like that, so I just brought that over to hockey in a way that I thought would be productive for myself and my team.

I’ve been trying to grow [that style] ever since I labeled myself as [a physical defenseman], and I hope keep improving in that aspect of my game.

Q: Did you play a lot of football growing up?

A: Yeah, I played all the way until I was a senior in high school. It was always a lot of fun.

A: I was a linebacker. And a running back.

Q: Your four years at St. Cloud State, you guys had some unbelievable teams. What was your experience like with the Huskies, and how did it help turn you into the player you are today?

I think that really grew me as a person. Those four years, being away from home, living on your own a little bit, it’s a lot of fun. Growing up through the college years, you have some great times in your life, great memories. You make friends that last forever.

My game just kind of progressed every year I felt like. Every year, I’d ask what I need to do better, what I need to improve on. I tried to work on those things year-in and year-out, and I’m happy to be where I am today.

Q: I mentioned that you play more of a physical, shut-down game, but you flashed some offensive skill in your brief time with Wilkes-Barre/Scranton at the end of the year. Is there a little untapped offensive potential in Jon Lizotte?

A: Maybe! I don’t know. Sometimes I need to see something happening before I take advantage of it, but my game style, I certainly don’t push the issue. I pick and choose my times and try to make plays when I can and help all the teammates out.

Q: You’re coming out of out of college as someone who’s already a physically developed prospect, and one who plays that physical style of game. How ready are you to take the step to the professional level?

A: I feel like I’m very ready. Those two weeks I spent in Wilkes-Barre/Scranton certainly helped put an image in my mind of what [pro hockey]’s about. It’s a different thing, all year long. That grind and stuff. I have a lot of things to prepare for, but I’m ready for it, and I’m excited to make that transition.