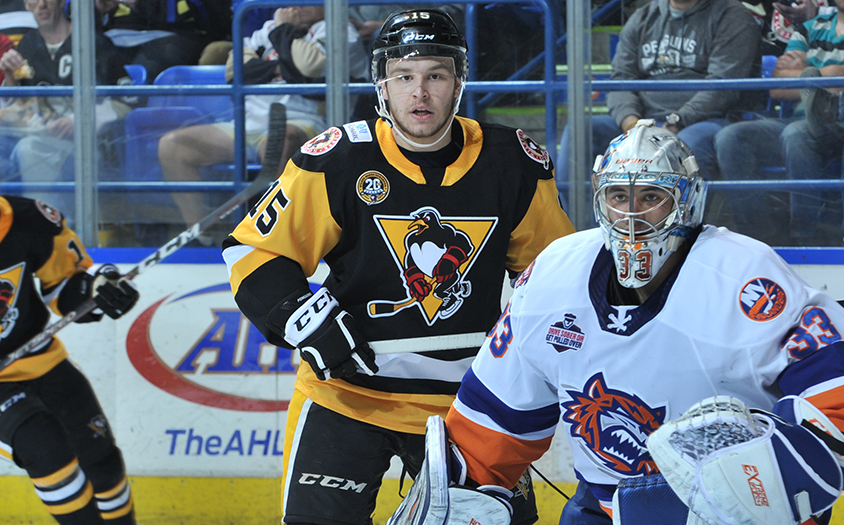 In Vancouver, British Columbia, hockey is king, and the Vancouver Canucks sit on the throne. Jordy Bellerive certainly appreciated the talents of the local hierarchy: Brendan Morrison, Todd Bertuzzi, Markus Naslund and Henrik and Daniel Sedin. However, the title of the young man’s “favorite” player went to someone who performed much, much farther away.

Before we divulge who Bellerive’s favorite player was, there are plenty of other topics to discuss with the Penguins prospect who will turn pro with Wilkes-Barre/Scranton this upcoming season. The undrafted but highly regarded forward explains the difference between his hometown and downtown Vancouver, why he thinks he’s ready for the jump to the pros, and going head-to-head against his hockey-playing siblings in the latest Q&A with a Penguin to be.

Learn all about Jordy in this Penguins Prospect Profile!

A: There definitely is. North Vancouver is kind of up in the mountains. There’s a little sea bus that takes you over, you can take a bridge down to downtown Vancouver. That’s usually what most people think when they think of Vancouver, just the downtown area. But like I said, you sea bus over [to North Vancouver], and it’s all mountains and ski hills and stuff on the north shore.

Q: So you’re more about the scenic life than the city life?

A: For sure. Stefan [Elliott] and I grew up playing at the same place, North Shore Winter Club. There’s a lot of great players that have come out of there. It’s pretty busy out there.

Q: Who was your favorite player growing up?

A: Crosby, for sure. I think it’s for pretty obvious reasons. He’s so dominant, but for me, it was about the way he acted off the ice. You could see him in the community being such a great guy and stuff like that. I don’t know, after being around him, I think I have a bit of a similar build; smaller guys that like to protect the puck. I always tried to model my game as much as I could around him.

Q: You had a brief stint with Wilkes-Barre/Scranton at the end of last year, but if someone hasn’t seen you play before, how would you describe Jordy Bellerive’s game?

A: Physical, undersized guy. Likes to shoot the puck, and definitely likes to throw the body, as well.

Q: You went from a guy who was undrafted, showed what you could do at Penguins camp, earned a contract and now wrapped up your last year of in Lethbridge. How do you think you grew over your junior career?

A: I learned a lot. I came in as a 16-year-old and had a pretty good year. I had an alright 17-year-old year, but went undrafted, which was a wake-up call for me. I really buckled down with my training and really got focused, and did everything I could to get that contract, which I ended up getting. You know, that changed my life.

I ended on a decent note there in Lethbridge, as well. So I’m looking to move on to pro hockey with it.

Q: Do you think your style of play will translate well to the pro level?

Q: Your sister, Brielle, played college hockey and won a NCAA National Championship with Clarkson. Were there a lot of battles in the Bellerive household between you and your sister growing up?

A: Oh yeah, for sure. I have an older brother as well who played five years in the (Western Hockey League). Between my sister, my brother and I, there were definitely a lot of battles. We have a little hockey rink in our basement that we grew up shooting around in, and we were all pretty physical throughout our childhood. We were pretty fortunate.

Q: Was there a decided winner every time you guys would play in the basement, or was it someone different every time?

A: Yeah, it was different every time, really. So that made it interesting for us.

PENGUINS TIES IN PAST OLYMPIC GAMES