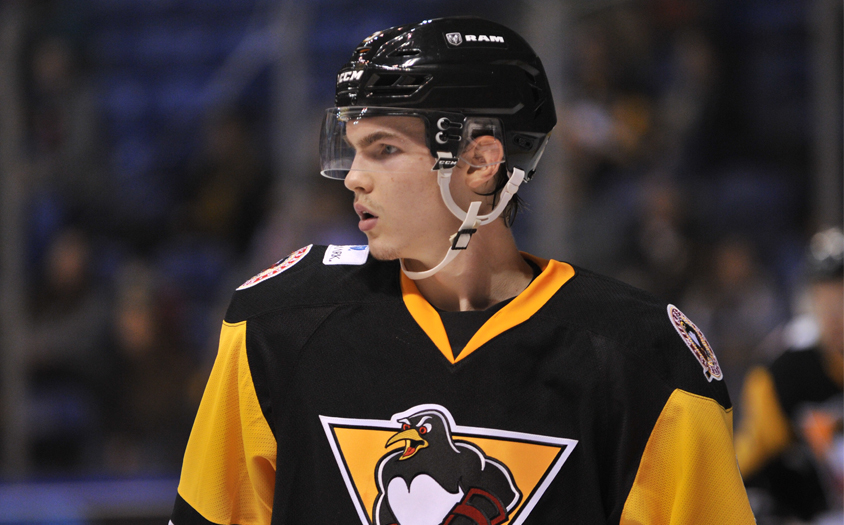 There’s no confusion in Niclas Almari’s head about what he wants to happen when he steps onto the ice. Well, actually, it’s more like what doesn’t want to happen.

Bred as a goalie in other sports and a defensemen in hockey, Almari absolutely hates seeing his team give up goals. He made that very clear at the Pittsburgh Penguins’ recent Development Camp, when we caught up with the 21-year-old Finnish blueliner and chatted about a number of different things, including his gravitation towards the stingier positions in sports.

Learn all about Niclas in this Penguins Prospect Profile!

Q: Your hometown, Kirkkonummi, where is that geographically in Finland?

A: It’s maybe 20 miles from Helsinki, to the south.

Q: Helsinki is a pretty big metropolitan area. How did you get into hockey?

Q: Did you have a favorite player growing up?

Maybe not the in the NHL, but maybe someone in the SM-liiga (Finnish Elite League). Maybe one Czech guy from HIFK, Roman Vopat. Me and my dad, we loved him.

Q: Was he a forward or defenseman?

A: He was a forward. Yeah, he was a big, bold forward.

Q: So if a forward was your favorite, why did you decide to become a defenseman?

A: I’ve always liked to defend the crease, not getting scored on. That’s the thing for me. I played soccer in net, I was a goalie, and Finnish floorball, I was also goalie. And now I’m a defensemen in hockey. Maybe that’s it.

Q: You said that if you had a favorite player, they were probably from SM-liiga. Was it hard to follow the NHL games growing up with the time difference?

A: Yeah, it’s hard because maybe once a week we’d have prime time games. Local time in Helsinki, they’ll start like maybe 9:00 p.m. It’s hard. Obviously, I played some PlayStation NHLs when I was a kid, but yeah, it was hard to watch the games.

Q: When you came to Wilkes-Barre/Scranton in 2017, there were a couple foreigners, but not a lot of Finns. Now, it seems like there are going to be a lot more of your fellow countrymen in the locker room. Is it going to be a Finnish takeover this year?

A: Yeah! I also said in another interview, “The tables have turned!” You have five guys at least in Pittsburgh [or Wilkes-Barre/Scranton] next season. It’s great.

Q: Are you guys going to hang out together, do all the same stuff together, or are you gonna try and spread out?

A: With the Finnish guys? I think me and Kasper [Björkqvist], we have been wondering if we would live together next season. We’ll see how it goes. But yeah, I know Kasper and Emil and Oula. We all know each other pretty well, so it’s pretty fun.

LEIGHTON LOOKING TO STOP PUCKS FOR, NOT AGAINST, PENGUINS