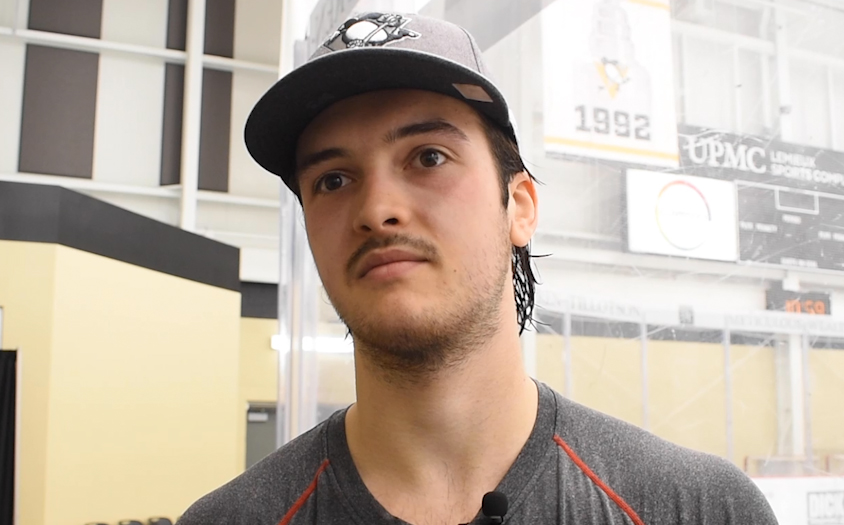 Like unicorns, jackalopes, or MissingNo., right-handed goaltenders are incredibly rare. Just look at the numbers. Of the 76 games played by the Wilkes-Barre/Scranton Penguins in 2018-19, only four netminders that appeared in those contests use their glove on their right hand. One of those goalies was Alex D’Orio.

D’Orio made his AHL debut with the Penguins in the team’s penultimate game of last season. Now the right-hand catching D’Orio is set to fully turn pro after a three-year junior career that was jam-packed with different learning experiences. The 20-year-old was kind enough to take the time to talk to us this summer and give us his thoughts on a number of topics, including his right-hand glove, his junior experience, and much more!

Learn all about Alex in this Penguins Prospect Profile!

Q: Your hometown, Sherbrooke, Québec, where is that geographically?

A: It’s an hour and a half south of Montréal.

Q: So I’m guessing you grew up a big Montréal Canadiens fan?

A: Oh, yeah! For sure. I was a big Canadiens fan and a big Carey Price fan.

Q: That sort of leads me into my next question… Why did you decide to become a goalie?

Q: I’m guessing there were no problems finding ice times and practice times in an area laround Montréal, right? That’s a hockey hotbed.

A: All of Québec is a big hockey province. Every time you want to have some ice, especially in Sherbrooke, there are a lot of rinks that are open during the summer. So if I want to take some ice, there’s always some available.

Q: You got a taste of just about everything in your QMJHL career. A championship run your first year with Saint John, then years when the team was rebuilding, and as a result, you faced a lot of pucks. This past year, you were traded to Baie-Comeau where you could be the No. 1 guy in charge on a team that was trying to make a deep run.  When you look back on your QMJHL career, what can you say about all of that time and all of that experience you were able to pack into that time?

A: It was an exceptional experience. My first year, I was coming there as a 17-year-old. I learned a lot. I grew up as a person. Our team was older than I was. That was our championship year, I learned a lot as a back-up, learned how to work and how to be ready for every game even if I wasn’t going on the ice.

After that, [my teammates] were way younger, and I faced a lot of shots during pretty much all of the games. That was another aspect that I learned about. And this year when I came to Baie-Comeau as a No. 1, I didn’t face as many shots as I was facing in Saint John, but I had to play more playoff games.

Overall, I think it was a great junior career.

Q: How has working with Andy Chiodo been? He’s been a fan favorite in Wilkes-Barre/Scranton for a long time, and now he’s moved onto a coaching role and has worked closely with you.

A: He’s awesome. I talk a lot with him. Last season, he came to Saint John for a full week to see me and see my game. Overall, I really like it, how Andy is approaching the game and everything.

Q: Speaking of your game, you say that you’re a big Carey Price fan, but is there anyone in particular that you model your style after?

A: It’s hard to tell, because I’m (right-handed). There’s not a lot of full-right goalies in the NHL, but I really like Carey Price because of how technical he is and how calm he is in net. I’m trying to be a little bit like him and show how calm you can be on the ice to help your team have that confidence.

Q: Right handed goalies aren’t all that common. Do you think that works to your advantage in any way? Maybe as something shooters aren’t used to seeing.

A: I think so. Maybe on some players, but I don’t think it’s always an asset on every player. For example, if there’s a player that’s shooting low-blocker and I have my glove, I think that can help me during a game.