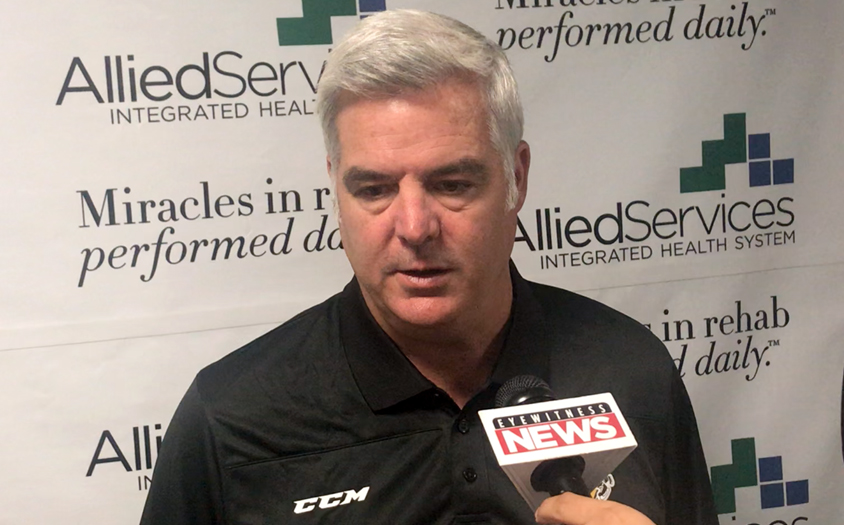 WILKES-BARRE, Pa. – Maybe it’s a case of being in the right place at the right time.

Perhaps it’s an instance of having the perfect man for job already under your employ.

Or maybe the most likely scenario is that Mike Vellucci’s hiring as general manager of the Wilkes-Barre/Scranton Penguins was a little bit of both.

The Pittsburgh Penguins announced on Thursday that they had hired Vellucci to be their assistant general manager, giving him dual duties as Wilkes-Barre/Scranton’s GM and head coach. In a conference call with media members following Pittsburgh’s announcement, Vellucci was completely undaunted by having the GM tagged onto his existing coaching duties in the AHL.

“It’s nothing different than what I was doing the past several years in Charlotte,” Vellucci said. “I think it’s going to be a pretty seamless transition here.”

As he alluded to, Vellucci served as the Charlotte Checkers’ head coach and GM over the past several seasons. He’s well versed in handling both jobs at once, but he was quick to point out that the assistance of Pittsburgh’s coaching staff has helped acclimate him to the organization and will only serve to make that transition easier.

Vellucci said that conversations with former Wilkes-Barre/Scranton GM Bill Guerin and Pittsburgh coach Mike Sullivan already had him poised to dive head-first into his new role with the Penguins. In fact, it was during a summit of all Penguins coaches where Vellucci was absorbing the ins and outs of the team’s system from Sullivan when he learned that his job description might be expanding.

“We happened to be in Nemacolin last week for coaches meetings when Billy got the opportunity in Minnesota,” Vellucci recalled. “So things slowed down for a bit, but then I chatted with Jim [Rutherford]. I didn’t seek him out or anything, we just talked. Earlier this morning, he called and asked if I was interested in taking the assistant GM job, and I accepted.”

Rutherford obviously trusts Vellucci to juggle both aspects of the job without the slightest fumble, because last year’s Calder Cup-winning coach/GM proved he knows what buttons to push in order to have success.

Vellucci also spent time complimenting the work Guerin did in free agency this past summer for Wilkes-Barre/Scranton before securing the vacant general manager position with the NHL’s Minnesota Wild, and added that the Penguins team that he’ll oversee will have “a good mixture” of young talent and veteran experience.

Things have seemingly been in constant flux for Vellucci this summer. He landed a new job with a new organization, then saw his responsibilities expanded within six months. But Wilkes-Barre/Scranton’s new leader made it very clear that throughout this transition, nothing has changed.

“I wanted an opportunity to win,” he said. “I won a championship in the American Hockey League, and I want to do it again.”