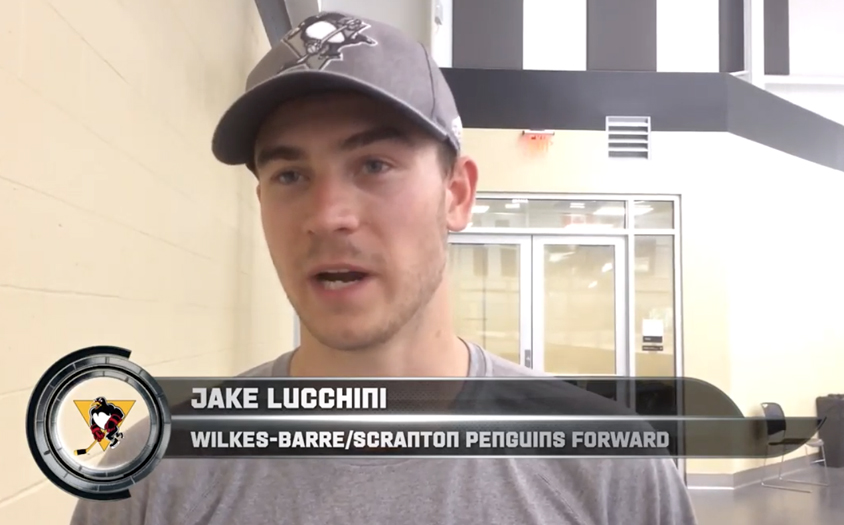 When the Pittsburgh Penguins inked undrafted college free agent Jake Lucchini to an entry-level contract last March, a couple of things stood out. He had a team-leading point total for two consecutive seasons, and also served as Michigan Tech’s captain during his senior year. But perhaps the most eye-catching thing about Lucchini wasn’t what letter was on his chest or what numbers appeared on the boxscore. Rather, it was what was on his head.

No one could ignore the long, brown hair that was on display in his team photos. Lucchini’s luscious locks were turning heads on social media as much as he was turning heads on the ice in his last year with the Huskies. However, when Lucchini showed up in Wilkes-Barre/Scranton at the end of last season, the flow had been stemmed, and a short-haired young man entered the locker room.

What ever happened to that wonderful head of hair? Jake offered the answer while fielding a number of questions from us earlier this summer. Learn all about Jake Lucchini in this Penguins Prospect Profile!

Q: Trail, B.C. has a time-honored tradition of producing some really good hockey players. What was it like growing up in Trail?

A: It was fun! You know, it was always at the rink, at the baseball field all the time. It’s a big sports town. It’s a small community, about 10,000 people, so you know everybody and everybody knows you. It’s cool, and it’s a lot of fun.

Q: You said “on the baseball field”. You were a baseball player growing up?

A: I love baseball. I played pretty much my whole life. I haven’t played in like three years, but I played [until] I was 20.

Q: Did you have a favorite team?

A: Toronto, for sure. Blue Jays, all the way. Absolutely.

Q: Who was your favorite hockey player growing up?

A: I liked Brendan Morrison. He was a guy I really liked. I’m a big, err– I was a big Vancouver Canucks fan. So growing up, I always watched them and him. He was always just a guy who worked really hard and kind of did everything right.

Q: Speaking of working hard and trying to do everything the right way, if someone hasn’t seen Jake Lucchini play before, how would you describe your game?

A: I like to work hard, kind of get in there. I like to help the team offensively and defensively, and play in all situation. I try and model my game around trying to do everything right. I know that’s kind of a cliché thing to say, but I really want to be responsible at all ends of the ice.

Q: You played at Michigan Tech University. That’s a really, really cool small hockey town, the way the fans gravitate towards the team. How unique is that atmosphere at MTU?

A: Yeah, it’s a lot of fun. It’s a lot different than other schools, for sure. It’s kind of like Trail, where I grew up. It’s a close-knit community, and the university loves hockey. So we’re kind of, I don’t want to say “a big deal”, but everybody loves the hockey team. Our crowd is great. We get a ton of fans at every game. It’s a lot of fun, and it was an unbelievable experience.

Q: When you were first signed by the Penguins, we saw a lot of your pictures from Michigan Tech. You had the long hair going, but you had cut it by the time you ended up with Wilkes-Barre/Scranton. Is there any chance we’ll see the return of long-haired Jake Lucchini?

Q: What was the inspiration behind that ‘doo? Just one day you decided to let it grow out?

A: My roommate and I decided that going into our senior year that we would grow our hair out for fun; for our last team pictures and individual pictures. We did that, and then I cut it a week after that.