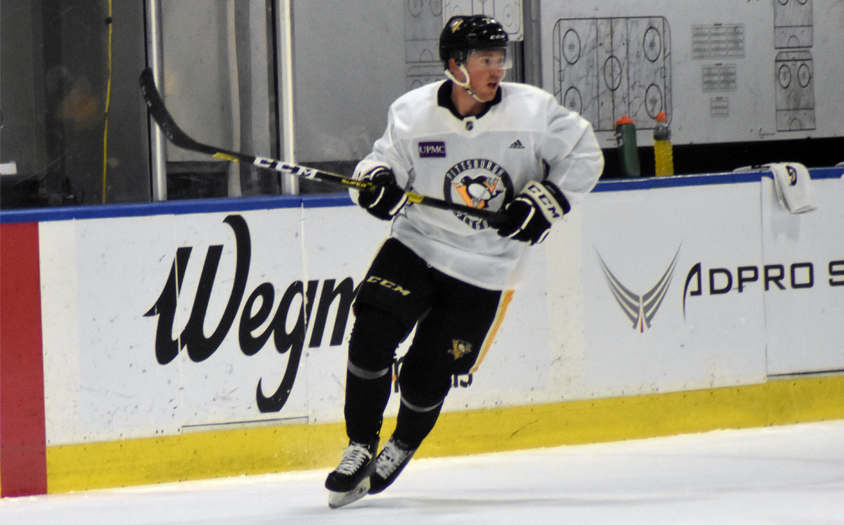 Notes and observations from the Penguins’ practice on Sunday

The 2019 Prospects Challenge provides a bevy of great opportunities for the Pittsburgh Penguins prospects, such as tuning up for training camp, impressing coaches and scouts alike, and, of course, the thrill of playing hockey again after a summer away from game action. For some players though, an event like this provides something more.

The Penguins organization has shown a history of inviting unsigned players to play for them at the tournament in Buffalo, New York, and a handful of those players have ended up with contracts. This year is no different, and Billy Moskal is among the unsigned invitees to this year’s event.

Moskal is the only one of the free agents to have played in both games of the Penguins’ schedule thus far, slotting in on the fourth line and often on the penalty kill. AS those contests wore on, the subtleties in Moskal’s game began to show through.

“First game, I was still feeling out the speed a little bit, and I was a little nervous,” he admitted. “But second game, I thought I played a lot better. I settled in, and I think I did a better job showing my stuff.”

And what exactly is Billy Moskal’s “stuff”? The 19-year-old centerman considers himself a responsible, two-way player who works tirelessly on the P.K. and can chip in on offense, too. He also considers face-offs to be an “important” facet of his game.

This scouting report checks out with Sam Miletic, fellow Penguins prospect and a teammate of Moskal’s in junior with the London Knights. In fact, once upon a time, Miletic came to this tournament as a tryout invitee and left with an NHL contract. Moskal hopes to follow in his old teammate’s footsteps by continuing to show the Penguins scouts and coaching staff what he’s made of at the Prospects Challenge.

“Hopefully they remember my work ethic,” Moskal said. “When they think back, I want them to remember that I was a good teammate, someone they want to invite back in the future and in years to come.”

The referees have been calling things tight in Buffalo, and thus, the Penguins prospects have seen a lot of special teams play through their first two games. The Penguins have been particularly stuck on the penalty kill in those two contests, heading to the man disadvantage 13 times.

Though no coach prefers seeing him team a man down, Mike Vellucci praised the work of his penalty kill units after Saturday’s win over New Jersey.

“We had some big penalty kills [on Saturday],” Vellucci said. “I think they had seven or eight power plays, and another five-on-three, too. Specialty teams was definitely a difference-maker in us winning that game.”

HAWKINS “FIGHTING” FOR A SPOT

Brandon Hawkins showed off his signature shooting ability in his brief time with Wilkes-Barre/Scranton last season, and he’s demonstrated that same skill in Buffalo this weekend. However, he introduced the Penguins coaches to a new weapon in his arsenal during Saturday’s win: fighting.

“My dad was a fighter, so he kind of taught me what he knew,” Hawkins said. “It shows that you have some guts if you don’t mind doing that, if you’re not afraid. It shows there’s something there in terms of your character on the ice.”

It’s yet to be seen if Hawkins – or any of the Pens prospects – will drop the gloves again in the last game of the Prospects Challenge on Monday, but Saturday’s fisticuffs certainly left an impression on the coaching staff. Hawkins won’t back down from a challenge.

• Speaking of making an impression, this weekend has served as a lot of young players’ first chance to strut their stuff in front of new Wilkes-Barre/Scranton head coach Mike Vellucci. This doesn’t seem to be lost on anyone, as even during the team’s practice on Sunday, players were giving their all and sprinting through the end of every drill.

• A lot of attention has been given to the Penguins’ defense pairings of Calen Addison & Niclas Almari and Pierre-Olivier Joseph & John Marino, and rightfully so. Flying under the radar a bit is the third pairing; two AHL-contracted blueliners, Michael Kim & Jon Lizotte. Kim has done a good job at using his stick to end plays in his own zone, and Lizotte has been a force while defending the Penguins’ net-front. Don’t sleep on Lizotte potentially making an impact with Wilkes-Barre/Scranton this season as a rugged but fairly fleet-footed defenseman.

• Perhaps the biggest question looming over the Penguins’ final game of the 2019 Proscpects Challenge is who will get the call to start in goal against the Sabres. Vellucci called Alex D’Orio “the difference” in Saturday’s win over New Jersey, but if I were a betting man, my money would be on Emil Larmi starting on Monday. Larmi was a champion in the Finnish Liiga last year, but is still making the adjustment to the North American rink dimensions for the first time in his career. A start on Monday would continue to aid him in that adjustment. However, Vellucci has given no indication as to who his pick will be for Monday’s starter.