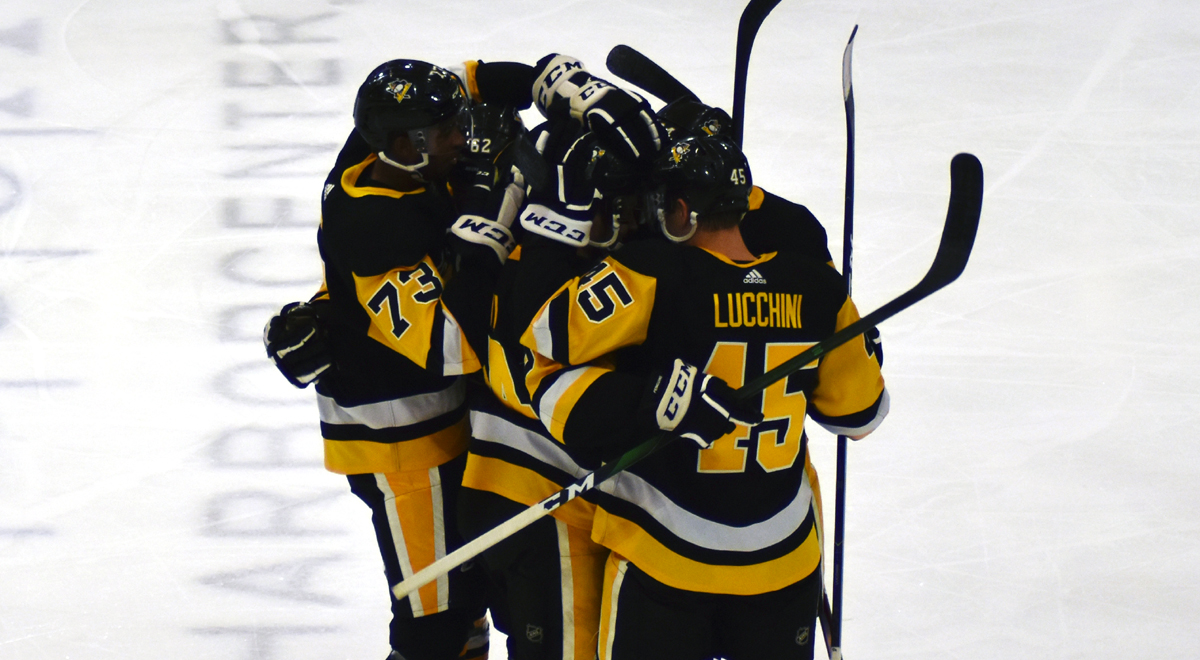 BUFFALO, N.Y. – Things seemed to be going swimmingly for the Pittsburgh Penguins prospects against the Buffalo Sabres on Monday, until things took a sudden shift to treacherous waters. Waves began crashing violently, but as the Penguins tossed and turned about, they never let themselves succumb to the tide.

In a game of wild momentum shifts, the Penguins ultimately hung on to defeat the Sabres, 6-4, and win the 2019 Prospects Challenge.

“It’s exciting and encouraging,” said Wilkes-Barre/Scranton Penguins head coach Mike Vellucci. “It was a good learning lesson, too. First game, we lose with 1.9 seconds left. Today, we scored four goals and then gave up four, but we responded well.”

After a first period that was bereft of offense, Pittsburgh’s squad unleashed a four-goal fury upon Buffalo. The Sabres then answered with a run of their own, and everything was suddenly going the hosts’ way. However, Vellucci’s Penguins were able to settle down, prove their mettle and hang onto to secure victory along with the top spot in the three-game tournament.

“What I like is we didn’t let our first game get us down,” Vellucci said when reflecting on his team’s reaction to adversity throughout the weekend. “Technically, we did a lot of really good things, things that we worked on in practice, and those carried over into today. And I was really proud of them for that.”

The Penguins prospects began their barrage of scoring while skating a man down. Sam Lafferty put his speed on display to create a shorthanded scoring chance, and then tucked it around the pads of the Buffalo goalie for the game’s first goal at 1:03 of the second period.

Anthony Angello continued his productive weekend by tallying twice in a three-minute span, giving the Pens a commanding 3-0 lead. That advantage increased to 4-0 at 9:05 of the middle frame, when Jordy Bellerive found the top corner for a power-play goal.

Buffalo began mounting a comeback by scoring twice in the waning moments of the second period, making it a 4-2 game.

The Sabres then managed a duo of goals again in the early goings of the final frame of regulation, but 16 seconds after they tied the contest, Nathan Légaré re-established the Pens’ lead, 5-4.

After Légaré put the Penguins back on top, they didn’t look back. The group began to lock things down defensively after springing a leak in the late-second and early third periods, and scoring chances suddenly became a premium for Sabres. Eventually, Sam Poulin scored into an empty net to round out the scoring, 6-4, and lock up the Prospects Challenge crown for Pittsburgh.

The Penguins prospects now head back to the Steel City for the formal start of Pittsburgh’s training camp next week. The Wilkes-Barre/Scranton Penguins begin their preseason schedule with home games on Wednesday, Sept. 25 and Friday, Sept. 27.

The home opener to Wilkes-Barre/Scranton’s season is Friday, Oct 12 against the Utica Comets. Season ticket packages for the Penguins’ upcoming 2019-20 season, including Full Season, 22-game, 12-game, Flexbook and Premium Seating plans, are available by reaching out to the Penguins directly at (570) 208-7367.

• Bellerive really made his presence felt in this one. He visibly improved with every game in this tournament, culminating in an impact performance on Monday. He was connecting on big hits, scored a power-play goal, and worked hard to set-up Légaré’s game-winner.

• Speaking of Légaré, the Penguins’ second-round pick from this past draft really has a knack for scoring timely goals. On Friday, when Boston scored to take a 3-2 lead, Légaré lit the lamp a mere seven seconds later to tie things up. Today, his response to the Sabres’ four-goal run was paramount in the Pens’ getting the win.

• Sam Poulin is a gosh-darn hockey player. He’s so tenacious in pursuit of the puck, seemingly with no off-switch. He’s got skill for a big guy, too, evidenced by the way he control the puck and finds the seams on the power play. It will still be two years before we see him in the AHL (if at all,) but Pittsburgh sure got a good one with their first-round pick this summer.

• P-O Joseph was excellent in this win, as well. For a defenseman who has been criticized for having too slight a frame, he sure throws his weight around a lot. There were a couple of times during the weekend that he did a good job of stepping into an attacker and separating the carrier from the puck.

• Although they surrendered a man-advantage marker to Buffalo, the Penguins’ penalty killers drew even more praise from Vellucci on Monday, saying they did “an outstanding job.” The Pens’ P.K. finished the event at 84.2% (16-for-19) with one shorthanded goal.