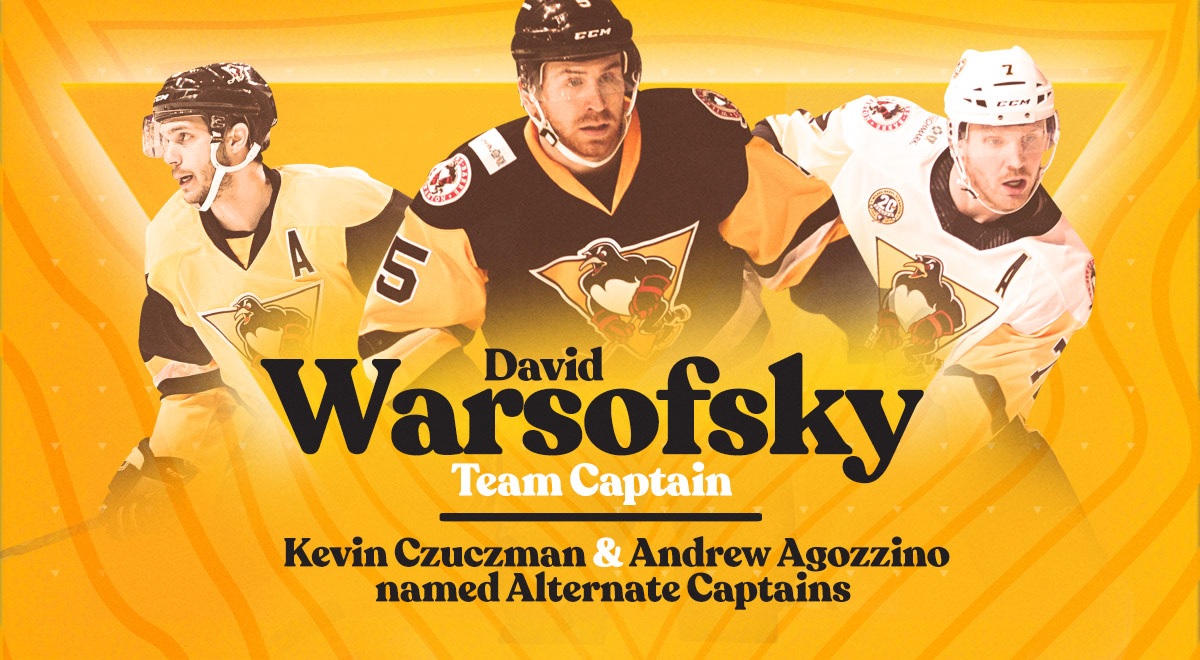 WILKES-BARRE, Pa. – The Wilkes-Barre/Scranton Penguins announced today their captains for the 2019-20 season. Defenseman David Warsofsky has been named captain of the Penguins, while defenseman Kevin Czuczman and forward Andrew Agozzino will serve as alternates.

“In the exhibition games, when things weren’t going great, [Warsofsky] stood up on the bench, and he was positive,” said Penguins head coach Mike Vellucci. “What I liked about him is that he was positive. He was positive to the younger guys, he was mentoring to them. He stood up and showed leadership.”

Warsofsky returned to the Penguins this past offseason as a free agent after spending the last two years in the Colorado Avalanche organization. Warsofsky spent parts of the 2015-16 and 2016-17 seasons with Wilkes-Barre/Scranton, including an appearance in the 2017 AHL All-Star Classic. In eight seasons of pro hockey, the 29-year-old blueliner has appeared in 55 NHL contests, recording 11 points (2G-11A) in that time. A prolific defenseman in the AHL, Warsofsky has 200 career points (45G-155A) in 403 AHL games.

Drafted in the fourth round (95th overall) at the 2008 NHL Entry Draft by the St. Louis Blues, the Marshfield, Massachusetts native has previous captain experience from his time with the United States National Team Development Program. He served as captain of the USNTDP in 2007-08, and also captained his country to a bronze medal at the 2008 U18 World Juniors.

Like Warsofsky, Agozzino joins Wilkes-Barre/Scranton after spending last year in the Colorado Avalanche organization. In seven seasons of AHL experience, Agozzino has led his team in points at the end of the season five times.

Czuczman is embarking on his sixth season of professional hockey, the past two of which have been spent with Wilkes-Barre/Scranton. The 28-year-old D-man has served as an alternate captain of the Penguins at times during the previous two seasons, as well.

Fans can also keep up with the Penguins through the AHL’s high-definition streaming service, AHLTV. Subscriptions for AHLTV are available now. Fans can visit theahl.com/AHLTV now to register for a free AHLTV account and purchase 2019-20 subscriptions.