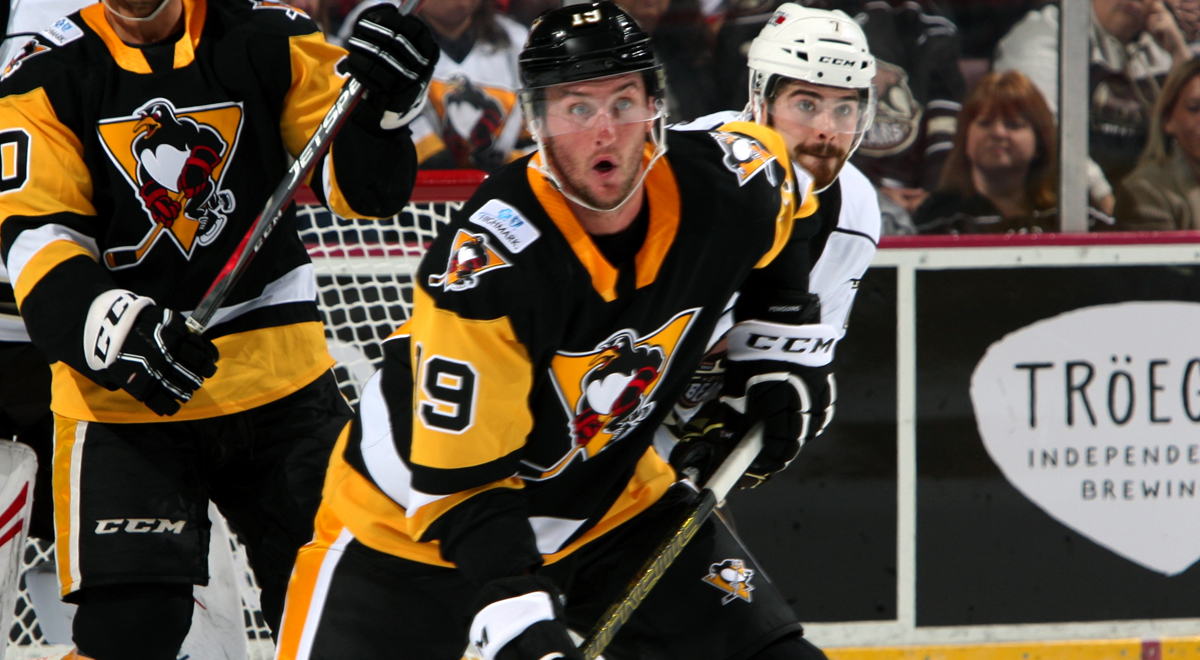 HERSHEY, Pa. – The Wilkes-Barre/Scranton Penguins began their 2019-20 season with a thrilling 4-3 victory over the Hershey Bears on Saturday night at Giant Center.

Wilkes-Barre/Scranton newcomer Stefan Noesen, who was signed to an AHL contract on Friday morning, tallied twice in his first game as a Penguin and was named the game’s first star for his efforts in the back-and-forth contest.

Hershey raced out to a quick start, scoring just 62 seconds into the game. Rookie defenseman Alexander Alexeyev rang a shot off the post and in, giving the Bears an early 1-0 advantage, but the Penguins swiftly responded with a goal by Jake Lucchini at 6:45 of the first period.

Wilkes-Barre/Scranton then took its first lead of the night when Noesen lit the lamp in his black and gold debut at 13:36 of the opening frame. However, Hershey took a page out of the Penguins’ book by generating a quick response, with Christian Djoos evening things up 2-2 less than two minutes later.

Noesen struck again for the Penguins at 2:55 of the second period, re-establishing the lead for his new team by collecting a rebound and slamming it to the back of the Bears’ net.

The Penguins’ lead was extended to 4-2 after the team survived a flurry of scoring chances during a Bears power play. When Anthony Angello exited the penalty box, he out-raced and out-muscled Hershey defenseman Lucas Johansen for a loose puck in the Bears zone and then beat Vítek Vaněček through the five-hole.

A late six-on-four man-advantage opportunity for Hershey allowed Matt Moulson to pull the Bears within one with 1:19 left in the game, but the Penguins ultimately held on to start the 2019-20 season 1-0-0-0.

Casey DeSmith posted a 36-save win for Wilkes-Barre/Scranton, while Vaněček recorded 26 stops for Hershey.

Wilkes-Barre/Scranton’s next game is Friday, Oct. 11 against the Lehigh Valley Phantoms in Allentown. The Penguins’ home opener is Saturday, Oct. 12 against the Utica Comets. Puck drop between the Penguins and Comets is scheduled for 7:05 p.m. at Mohegan Sun Arena at Casey Plaza.