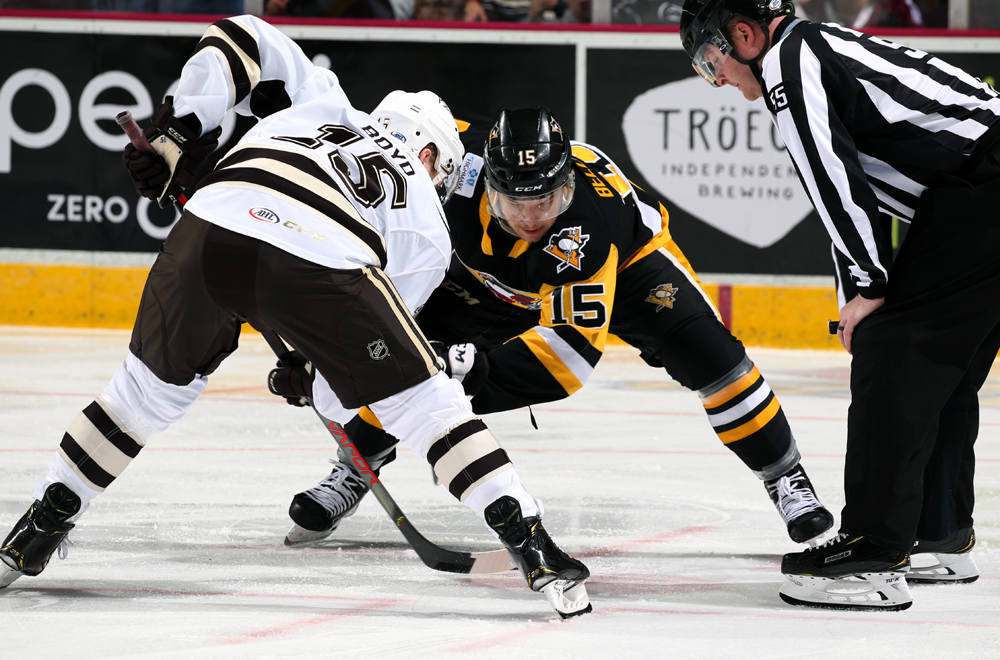 HERSHEY, Pa. – In their final game of a three-in-three weekend, the Wilkes-Barre/Scranton Penguins lost to the Hershey Bears, 5-1, on Sunday at Giant Center.

Hershey’s first of two power-play goals on the night came from Travis Boyd at 15:27 of the opening frame. Boyd then proceeded to set up the Bears’ second man-advantage marker, delivering a pass on the backdoor to Matt Moulson. Moulson was denied initially by Casey DeSmith, but he gathered the rebound and pushed it across the goal line at 17:39.

The Bears increased their lead to 3-0 on an unlucky bounce that opened the door for Boyd to take advantage. DeSmith was bumped by one of the Bears, knocking him off balance and preventing him from regaining positioning for a wrap-around attempt by Boyd. Boyd’s shot then went off the skate of a Penguins defenseman and in at 6:56 of the second period.

Martin Fehérváry scored shorthanded for a 4-0 Hershey lead midway through the second stanza.

The Penguins stole the shutout from Bears goaltender Pheonix Copley late in regulation with Niclas Almari’s first AHL goal. Almari was set up in the slot from below the goal line by Chase Berger, who worked hard to pull the puck out of a board battle before delivering the pass to his fellow rookie. Almari’s tally came with 1:25 left in the game.

Copley finished the game with 26 saves for Hershey, while DeSmith posted 20 saves in the loss.

Wilkes-Barre/Scranton’s next game is Wednesday, Oct. 16 against the Binghamton Devils at Mohegan Sun Arena at Casey Plaza. Puck drop between the Penguins and Devils is scheduled for 7:05 p.m.