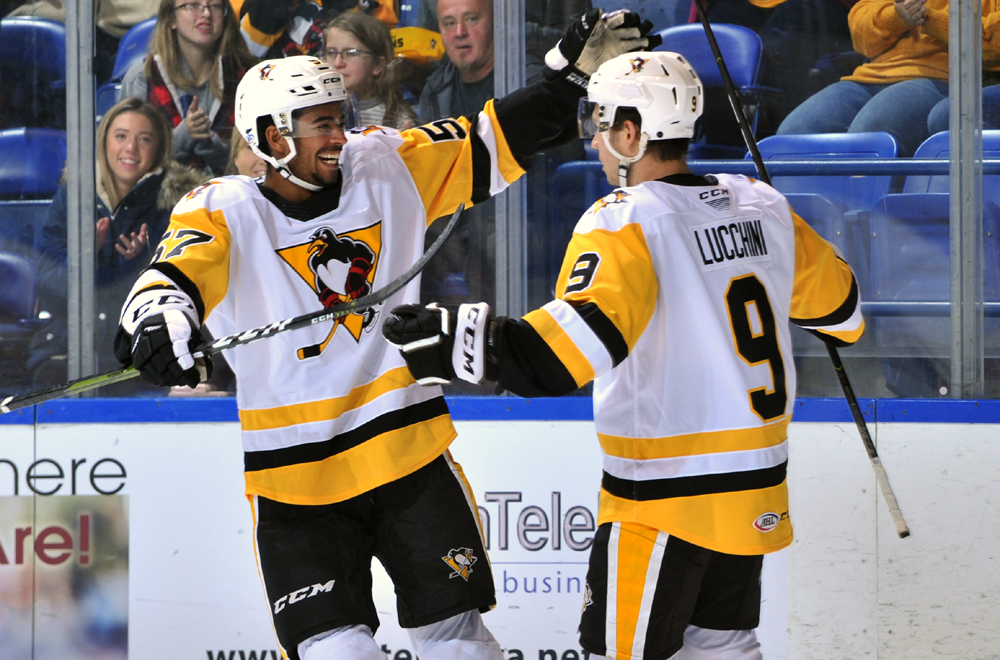 WILKES-BARRE, Pa. – The Wilkes-Barre/Scranton Penguins came from behind and defeated the Binghamton Devils, 5-3, on Wednesday night at Mohegan Sun Arena at Casey Plaza.

Wilkes-Barre/Scranton (2-2-1-0) saw a pair of rookies notch their first AHL goals on the comeback trail before Stefan Noesen put the icing on the cake with two tallies in the third period. With the win, the Penguins improved to 11-0-0-0 all-time against the Devils.

Both teams got off to a hot start, beginning with Binghamton’s Chris Conner scoring a power-play goal 2:05 into the contest. The Penguins retaliated quickly with a highlight-reel goal from Jake Lucchini just 32 seconds later, tying the game at 1-1.

Binghamton once again used a man advantage to its benefit, striking during a delayed-penalty, extra-attacker situation in the last two minutes of the opening frame. Ben Street came on as the sixth man and gave the Devils back the lead.

Midway through the second period, Joey Anderson took a pass from Street and added to Binghamton’s score, 3-1. The Devils looked destined to carry that lead into the second intermission, until Justin Almeida ripped a wrist shot off the post and into the net behind Evan Cormier with 15.8 seconds left in the period. Almeida’s first AHL goal proved to be a critical one, cutting the Penguins deficit in half right before the break.

Kasper Björkqvist followed Almeida’s example and tied the game, 3-3, with his first AHL goal at 8:58 of the third period. Then, with a little over two minutes left in the game, Stefan Noesen collected a rebound in the shot and beat Cormier to the blocker side, giving the Wilkes-Barre/Scranton its first lead of the night.

One minute later, Noesen scored into the empty net for his sixth goal of the season and generated a 5-3 lead for the Penguins.

Wilkes-Barre/Scranton’s next game is Saturday, Oct. 19 against the Bridgeport Sound Tigers at Webster Bank Arena. Puck drop between the Penguins and Tigers is scheduled for 7:05 p.m.