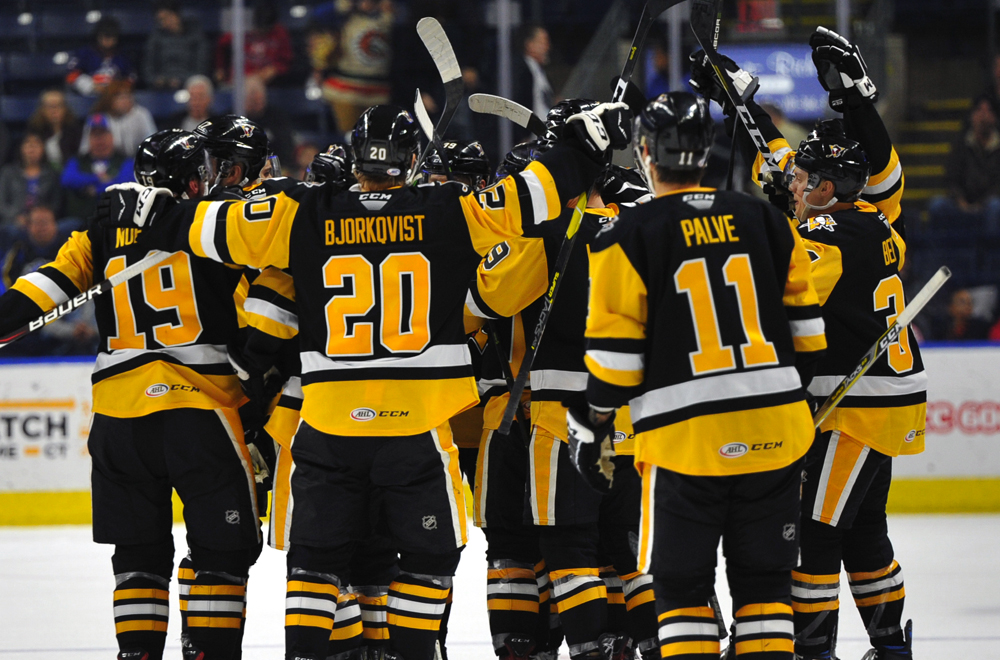 The Sound Tigers took an early lead with a tip-in goal by Ryan Bourque four minutes into the contest. Wilkes-Barre/Scranton responded with Andrew Agozzino’s first goal as a Penguin at 8:20 of the first period. Less than a minute later, Agozzino helped set up a power-play goal by Sam Miletic that gave the Penguins a 2-1 lead.

Bridgeport pulled even with Wilkes-Barre/Scranton late in the opening frame, cashing in on a man advantage with 46 seconds left in the period. Sebastian Aho rang a slap shot off the crossbar, and then Nick Schilkey slid in to swipe the rebound across the goal line.

Neither team was able to light the lamp the rest of the way through regulation, with both clubs’ penalty kills coming up huge in the third period.

In overtime, the Sound Tigers thought they had the game won on a wrap-around by Matt Lorito. However, the referee waved off what would have been the game-deciding goal after Keiffer Bellows made contact with Casey DeSmith on the play. Overtime carried on without either team managing to end things in the five-minute, sudden-death period.

Noesen, Cramarossa and Haggerty all stepped up in the shootout, while DeSmith held tough for the Penguins to get the win.

DeSmith recorded 23 saves in regulation and overtime, and went one-for-two on stops in the shootout. The Sound Tigers’ Christopher Gibson notched 25 saves in three periods plus OT, but was beaten on all three shootout attempts.

Wilkes-Barre/Scranton’s next game is Wednesday, Oct. 23 against the Binghamton Devils at Floyd. L. Maines Veterans Memorial Arena. Puck drop between the Penguins and Devils is scheduled for 7:05 p.m.