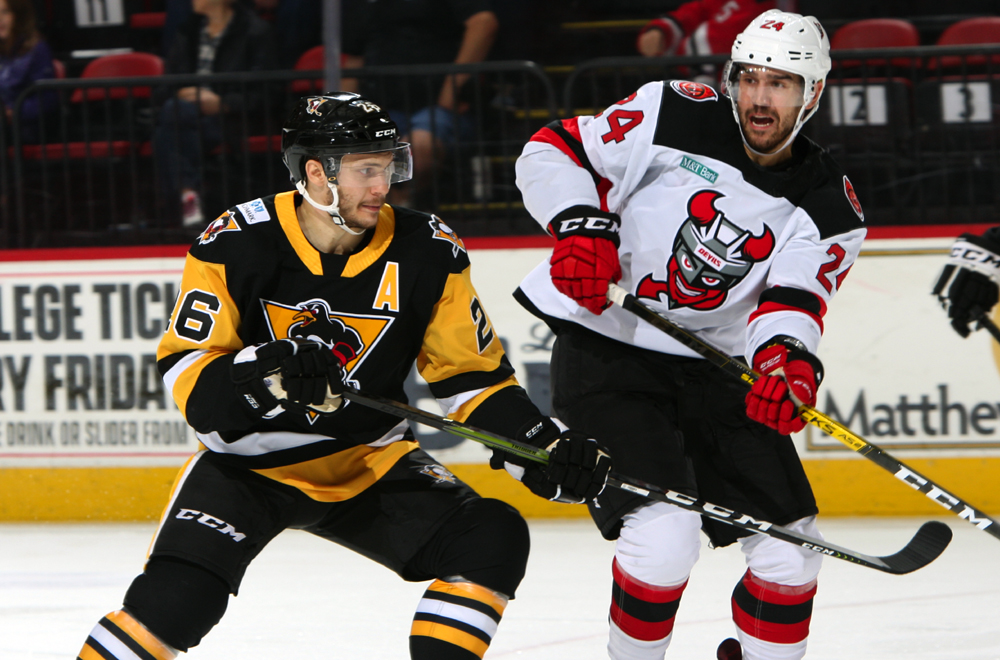 BINGHAMTON, NY. – The Wilkes-Barre/Scranton Penguins lost to the Binghamton Devils for the first time in franchise history, suffering a 4-1 defeat on Wednesday at Floyd L. Maines Veterans Memorial Arena.

Binghamton’s Brett Seney tallied twice in the early stages of the game, putting Wilkes-Barre/Scranton (3-3-1-0) at a disadvantage from which it never fully recovered. The Penguins entered the game undefeated all-time against the Binghamton Devils, but are now 11-1-0-0.

Seney and the Devils’ strong start began 36 seconds into the game, when Seney collected a rebound off the pads of Casey DeSmith and tucked it underneath the crossbar. Five minutes later, Seney came back for a goal on the power play, putting Binghamton in a 2-0 lead.

The Penguins shut things down in the second period, allowing only five shots on goal. Joseph Cramarossa tried to spark his teammates by engaging in a marathon fight with Dakota Mermis at 7:50 of the middle frame. After he served his five minutes for fighting and the second period came to an end, Wilkes-Barre/Scranton still trailed by two.

The Penguins came out in the third with purpose, generating a flurry of early scoring chances and eventually getting one past Gilles Senn. Andrew Agozzino took a lovely pass from Niclas Almari and wired the puck into the net at 4:24 of the final frame of regulation.

The Devils retaliated with a goal by Michael McLeod, 3-1, on their first shot of the period with less than 12 minutes left in regulation. Ben Street sealed the win for Binghamton with an empty-netter at 16:54 of the third period.

DeSmith notched 22 saves for the Penguins, while Senn earned his first AHL win with 20 stops.

Wilkes-Barre/Scranton’s next game is Friday, Oct. 25 against the San Antonio Rampage. Puck drop between the Penguins and the Rampage is scheduled for 7:05 p.m. at Mohegan Sun Arena at Casey Plaza.