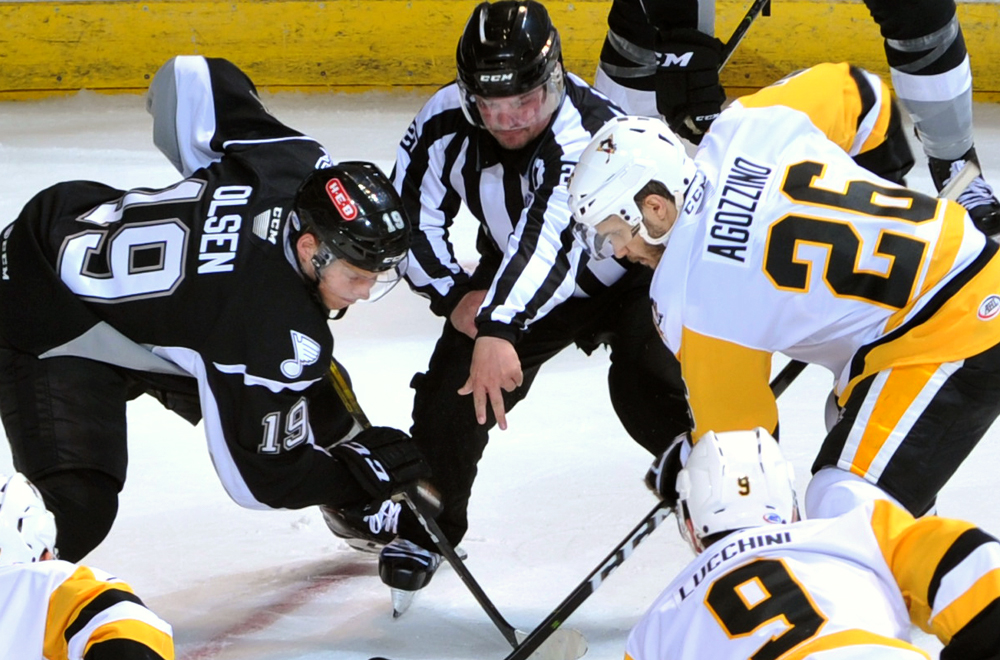 WILKES-BARRE, Pa. – In a rematch that was a decade in the making, the Wilkes-Barre Scranton Penguins lost to the San Antonio Rampage, 5-3, on Friday night at Mohegan Sun Arena at Casey Plaza.

Wilkes-Barre/Scranton (3-4-1-0) welcomed San Antonio to Mohegan Sun Arena at Casey Plaza for the first time since 2009 and started off strong with a three-goal first period. However, the Rampage power play took over in the second and third periods, leading them to victory.

The Penguins wasted no time in taking the lead in the first period. Stefan Noesen scored his seventh goal of the season with a highlight-reel cut through the defense and finish 3:14 into the contest. Minutes later, Wilkes-Barre/Scranton received another goal from Joseph Cramarossa.

The Rampage fought back with a Nathan Walker tip-in at 9:22, but the Penguins quickly counterpunched. Less than two minutes later, Andrew Agozzino re-established Wilkes-Barre/Scranton’s two-goal lead. With the retaliatory tally, Agozzino extended his point streak with the Penguins to four games (3G-3A).

San Antonio’s power play flashed its proficiency 13 seconds into the second period with a strike from Walker.  Then Klim Kostin tied the game, 3-3, with another Rampage man-advantage marker at 4:31 of the middle frame.

Mitch Reinke granted the Rampage their first lead of the game with a point shot that found its way through traffic and into the back of the Penguins’ net at 7:04 of the second period.

San Antonio generated a third-period insurance marker in the form of anther power-play goal. Nick Lappin rang a wrist shot off the post and in with less than eight minutes left in regulation.

Ville Husso made 22 saves for the Rampage. Penguins goaltender Emil Larmi was handed the loss after posting 25 saves on 29 shots faced. Larmi was replaced by Casey DeSmith at the start of the third period, and he notched five saves on six shots against.

Wilkes-Barre/Scranton will get a chance at revenge tomorrow, as its next game is Saturday, Oct. 26 against the San Antonio at Mohegan Sun Arena at Casey Plaza. Puck drop between the Penguins and the Rampage is scheduled for 7:05 p.m.