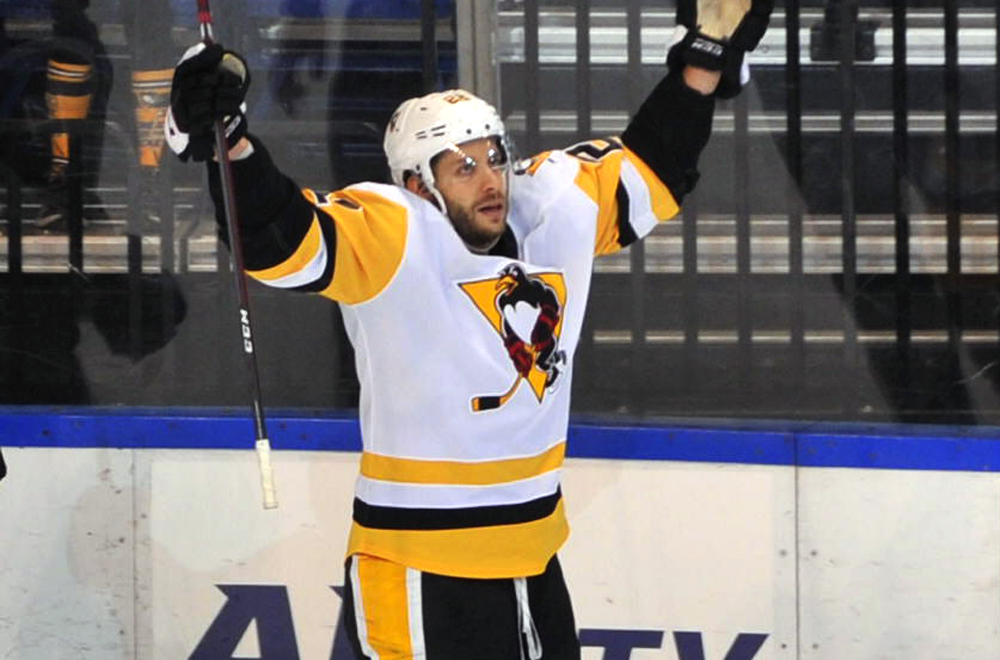 WILKES-BARRE, Pa. – Joseph Cramarossa put the icing on the cake for the Wilkes-Barre/Scranton Penguins’ 5-4 win over the San Antonio Rampage by scoring the overtime game-winner on his birthday Saturday night at Mohegan Sun Arena at Casey Plaza.

Wilkes-Barre/Scranton (4-4-1-0) kept pace with San Antonio’s proficient power play unit all night long until the birthday boy, Cramarossa, struck at 1:44 of the sudden death period and gave the team its first overtime win of the season.

The Penguins took an early lead on a goal that was set-up by Cramarossa. He delivered a backdoor pass to Ryan Haggerty, who pushed the puck across the goal line at 3:37.

The Rampage’s power play took over for the rest of the first period, being afforded four man advantage opportunities in the opening frame. Nick Lappin tied the game with a power-play goal at 7:07, and then Nathan Walker added another man-up marker at 16:21 of the first period, giving San Antonio a 2-1 lead.

Stefan Noesen retaliated with two power-play goals of his own, starting at 3:37 of the second period. Noesen drove to the net for a shot that was stopped by Adam Wilcox, but the Penguins forward swatted his rebound out of the air and into the net to even things up, 2-2. Minutes later, Noesen scored again on the man advantage with the help of Sam Miletic.

Mike Vecchione tied the score at threes when he lit the lamp for San Antonio with less than four minutes to go in the second stanza. Vecchione deposited another tally for the Rampage a mere 31 seconds into the third period, and reestablished a one-goal lead for the Rampage.

The Penguins’ power-play put forth its third goal of the night at a clutch time, evening the scales, 4-4, at 6:38 of the final frame of regulation. Jordy Bellerive netted his first AHL goal with a one-timer at the end of a terrific passing play by Jon Lizotte and Andrew Agozzino.

In overtime, Miletic and Cramarossa raced ahead on a two-on-none rush, and Miletic delivered the puck right to the tape of the now 27-year-old for the game-winner.

Wilkes-Barre/Scranton’s next game is Friday, Nov. 1 against the Lehigh Valley Phantoms at PPL Center. The Penguins next home game is Saturday, Nov. 9, when they take on the Syracuse Crunch. Puck drop between the Penguins and Crunch is scheduled for 7:05 p.m.