PENGUINS FALL TO THUNDERBIRDS IN SHOOTOUT, 4-3 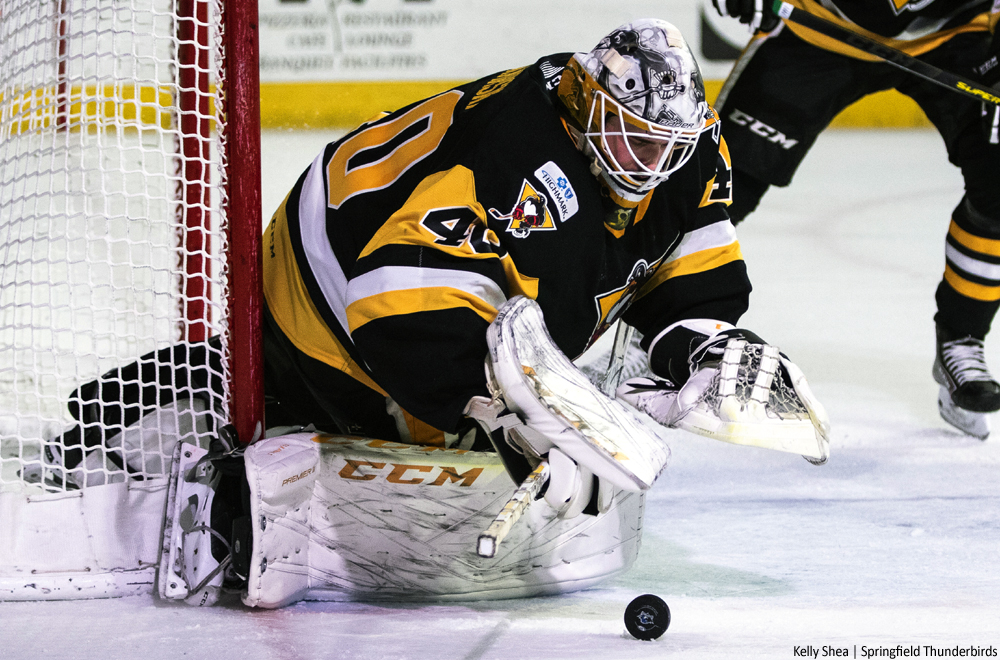 SPRINGFIELD, Mass. – The Wilkes-Barre/Scranton Penguins dropped a 4-3 shootout decision to the Springfield Thunderbirds on Saturday night at MassMutual Center.

Despite out-shooting Springfield, 44-22, Wilkes-Barre/Scranton (5-4-1-1) couldn’t pull ahead to lock things up in regulation. The Penguins went to overtime for the third game in a row, but this time, the shootout was unkind to the black and gold.

Springfield was the first to put a point up on the board at 1:52 with a goal Daniel Audette. The Penguins retaliated midway through the first period with a four-on-three power-play goal by Joseph Blandisi.

Shots on goal were even, 11-11, after the first 20 minutes, but they didn’t stay that way for long. The Penguins out-bid the Thunderbirds, 14-3, in the second period, yet were facing a 2-1 deficit as they entered intermission. With only 24.4 seconds left in the middle frame, Aleksi Saarela scored on a Springfield power play.

Wilkes-Barre/Scranton bounced back in the third period, tallying twice in the early stages of the frame. Sam Miletic tipped in a man-advantage marker at 2:53, and then Blandisi scored for the second time on the night 20 seconds later.

The Penguins proceeded to continuously out-shoot the T-Birds as the third period wore on, but Springfield still managed to even things up. With 6:32 left in regulation, Aleksi Heponiemi set-up Owen Tippett for the equalizer.

After neither team executed a game-winner goal in overtime, they went into a shootout. Henrik Borgström and Stefan Noesen both scored in the first round, respectively, and it took until the sixth round of the shootout for Tippett to light the lamp and win the game for the Thunderbirds.

Dustin Tokarski recorded 19 saves in regulation and overtime in his Penguins debut and added four more stops in the shootout. T-Birds goalie Philippe Desrosiers notched 41 saves in 65 minutes of play, and tacked on five shootout saves to get the victory.

Wilkes-Barre/Scranton’s next game is Wednesday, Nov. 6 against the Lehigh Valley Phantoms at PPL Center. The Penguins’ next home game is Saturday, Nov. 9 against the Syracuse Crunch. Puck drop between the Penguins and Crunch is scheduled for 7:05 p.m.