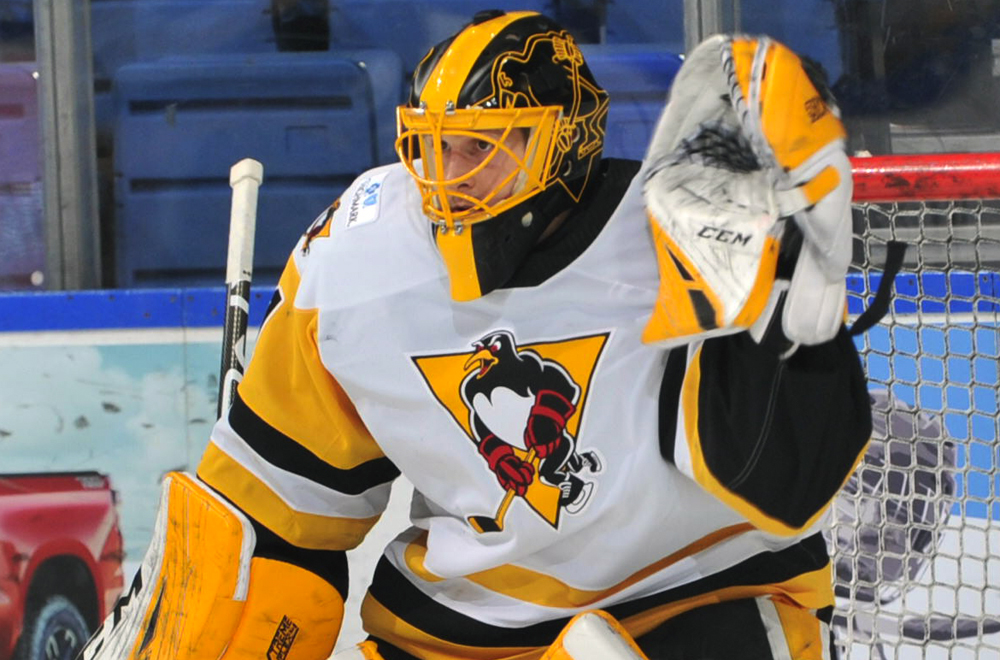 Wilkes-Barre/Scranton (7-5-1-1) earned its first shutout of the season thanks to DeSmith, who successfully fought off 35 shots en route to the eighth clean sheet of his pro career.

The Penguins came out and scored the first goal of the game just four minutes into the contest. Stefan Noesen’s centering pass bounced off the skate of Andrew Agozzino and in for the opening tally.

Syracuse attempted to shift momentum in its favor in the second period. Despite generating 14 shots in the middle frame, DeSmith did not let anything get past him. One of the Crunch’s best chances to light the lamp came while shorthanded, when Ross Colton was given a perfect pass on a two-on-one rush only to be denied by DeSmith at 8:09 of the second period.

DeSmith continued his hot run through the third period, turning aside Syracuse skaters on several other odd-man scoring opportunities.

Wilkes-Barre/Scranton notched an insurance marker at 12:35 of the third period with a shorthanded goal by Zach Trotman. Trotman unloaded a slap shot from the blue line that found its way past Spencer Martin, and put the Penguins up, 2-0.

DeSmith was peppered with shots until the final seconds of the third period, but he and the rest of his teammates were able to hang on for the win. In fact, the Penguins’ penalty kill went a perfect six-for-six against the Crunch power play that entered the game third overall in the American Hockey League.

Martin recorded 20 saves on 22 shots faced while manning the pipes for Syracuse.

Wilkes-Barre/Scranton’s next game is Wednesday, Nov. 13 against the Hershey Bears. Puck drop between the Penguins and Bears is scheduled for 7:05 p.m. at Mohegan Sun Arena at Casey Plaza.