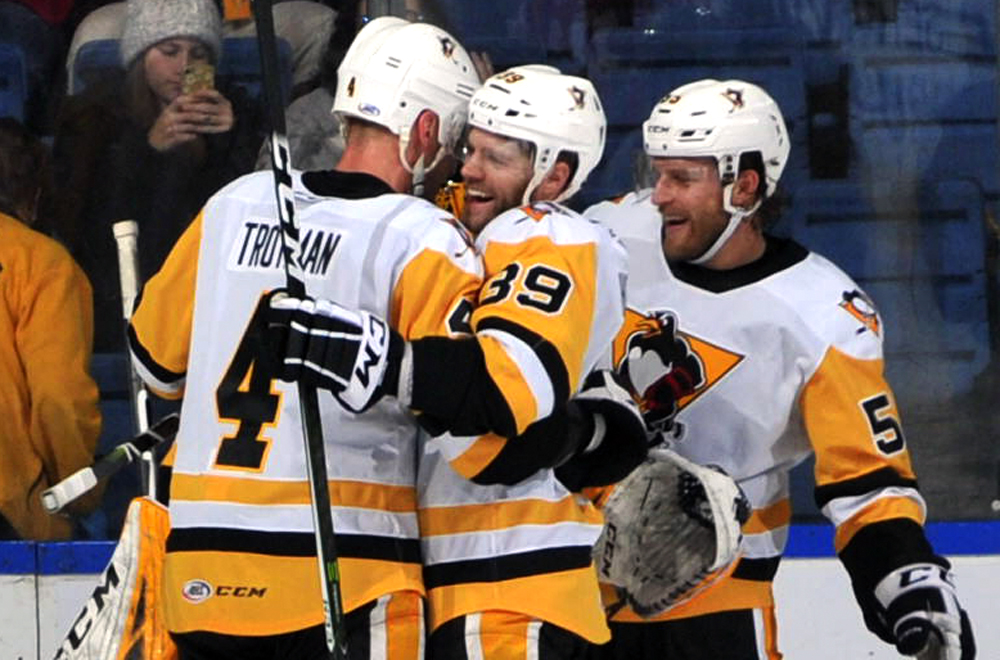 WILKES-BARRE, Pa. – The Wilkes-Barre/Scranton Penguins made it four wins in a row with a 4-1 win against the Springfield Thunderbirds on Friday night at Mohegan Sun Arena at Casey Plaza.

Wilkes-Barre/Scranton (9-5-1-1) took an early lead early and then latched down in the second and third periods. Casey DeSmith saw his two-game shutout streak come to an end, but he recorded a season-high 41 saves to help the Penguins secure victory.

The Penguins opened up the first period with a goal merely 49 seconds into the game when Andrew Agozzino poked the puck across the goal line after it slipped through the pads of goalie Chris Driedger.

Not to be denied, Agozzino struck again before the first period came to an end. Agozzino was set up in the slot with a spinning pass from the corner by Stefan Noesen, and Agozzino lifted the puck over Driedger’s glove at 16:14 of the opening frame. Sam Miletic also notched his second assist of the game on Agozzino’s second tally.

Springfield began the second stanza with a minute and 42-second two-man advantage, and then an additional 2:04 of power-play time after that due to a double-minor for high-sticking. Wilkes-Barre/Scranton passed this test with flying colors, allowing few shots during the elongated power play. The Penguins’ penalty kill ended up going a perfect seven-for-seven on the night.

Kevin Czuczman extended the Penguins’ lead to 3-1 with his first goal of the season at 5:42 of the second period. Later, Ryan Haggerty tacked on an insurance marker in the form of an empty-net goal with 1:02 left in regulation.

Driedger recorded 31 saves on 34 shots faced for the Thunderbirds.

Wilkes-Barre/Scranton’s next game is tomorrow, Saturday, Nov. 16, against the Lehigh Valley Phantoms. Puck drop between the Penguins and Phantoms is scheduled for 7:05 p.m. at Mohegan Sun Arena at Casey Plaza.