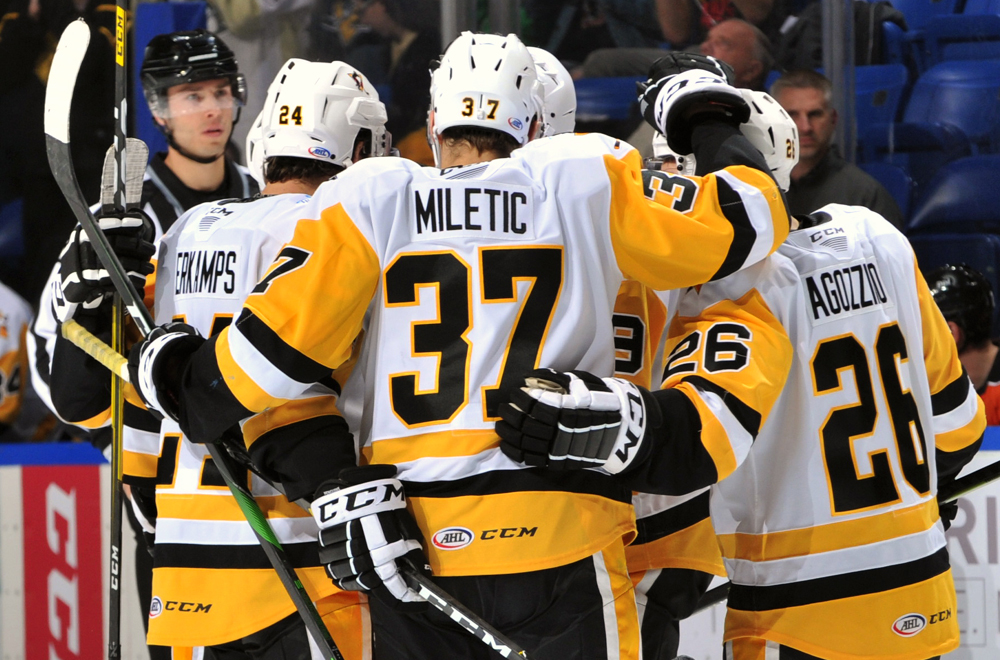 WILKES-BARRE, Pa. – The Wilkes-Barre/Scranton Penguins defeated the Lehigh Valley Phantoms, 2-1, on Saturday night at Mohegan Sun Arena at Casey Plaza to win their fifth game in a row.

Wilkes-Barre/Scranton (10-5-1-1) received a goal from its captain, David Warsofsky, early in the third period and then turned to former Phantom Dustin Tokarski to lock things down from there.

The Penguins raced out to a hot start, generating the first four shots of the game, all from dangerous scoring areas. After Alex Lyon turned in four excellent saves, the Phantoms flipped things in their favor and rattled off 12 consecutive shots on goal. Tokarski kept the game at 0-0 until Wilkes-Barre/Scranton earned a late first-period power play. That man advantage opened the door for Sam Miletic to kick off the scoring, collecting a rebound off of Lyon’s pads and throw it to the back of the net with 1:05 left in the period.

Lehigh Valley tied up the score just 55 seconds into the middle frame. Much like Miletic, Mikhail Vorobyev used a rebound to light the lamp and even the game at 1-1.

Early in the third period, Miletic and Stefan Noesen combined to force a turnover behind the Phantoms net and set up Warsofsky for a slap shot. The captain’s bid beat Lyon to the short-side and put the Penguins back in the lead just 1:29 into the final frame of regulation.

Tokarski proceeded to stop 10 Phantoms shots in the third period, including a lunging back-door denial of German Rubtsov during a Lehigh Valley power play. Tokarski secured the win with 31 saves overall on the night.

Lyon made 23 saves for the Phantoms.