PENGUINS STREAK AT SIX AFTER 4-2 WIN AT SPRINGFIELD 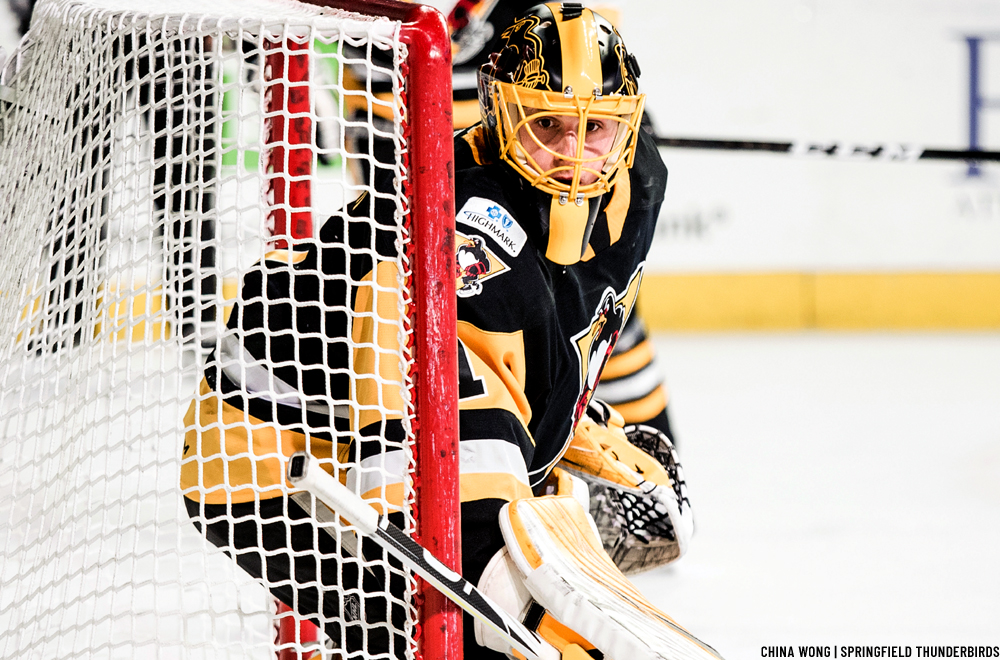 SPRINGFIELD, Mass. – The Wilkes-Barre/Scranton Penguins stretched their winning streak to six games with a 4-2 triumph against the Springfield Thunderbirds on Friday night at MassMutual Center.

With the help of Casey DeSmith protecting the net, Wilkes-Barre/Scranton (11-5-1-1) improved its season-best win streak and maintained its hold on second place in the Atlantic Division.

The Penguins took the lead less than three minutes into the game, as Andrew Agozzino stuffed in a rebound at the side of the T-Birds’ net. After David Warsofsky’s initial point shot was stopped by Chris Driedger, Sam Miletic slid the rebound across the crease to a wide-open Agozzino for the go-ahead goal.

At 12:50, the Penguins pushed their lead to 2-0. Thomas Di Pauli earned his first goal of the season with another rebound deposit shoved across the goal line.

There were no power plays for either side in the first period, but that all changed in the middle frame. Wilkes-Barre/Scranton used its second man advantage of the game to take a 3-0 lead. A pretty passing play in the offensive zone set up Stefan Noesen for a backdoor one-timer at 6:41 of the second period. However, 61 seconds later, the Thunderbirds fought back with a power-play goal of their own by Blaine Byron.

In the third period, Byron nearly had his second power-play goal of the night, only to see his wide-open rebound shot robbed by the glove of DeSmith. DeSmith reached behind his back and plucked the puck out of the air right before it crossed the goal line and kept his team up by two. Unfortunately for DeSmith, the Penguins quickly took another penalty, and Henrik Borgström took advantage of the five-on-three situation to make it 3-2.

DeSmith locked things down from there, and watched on as Noesen sealed the victory with an empty netter with only 50 seconds left in regulation.

DeSmith posted 40 saves in the win for the Penguins, his second-straight game with 40 or more stops. Driedger finished the night having made 27 shots on 30 shots faced.

Wilkes-Barre/Scranton’s next game is tomorrow, Saturday, Nov. 23 against the Charlotte Checkers. Puck drop between the Penguins and Checkers is scheduled for 7:05 p.m. at Mohegan Sun Arena at Casey Plaza.

PENGUINS FALL TO PHANTOMS IN SECOND HALF OF HOME AND HOME