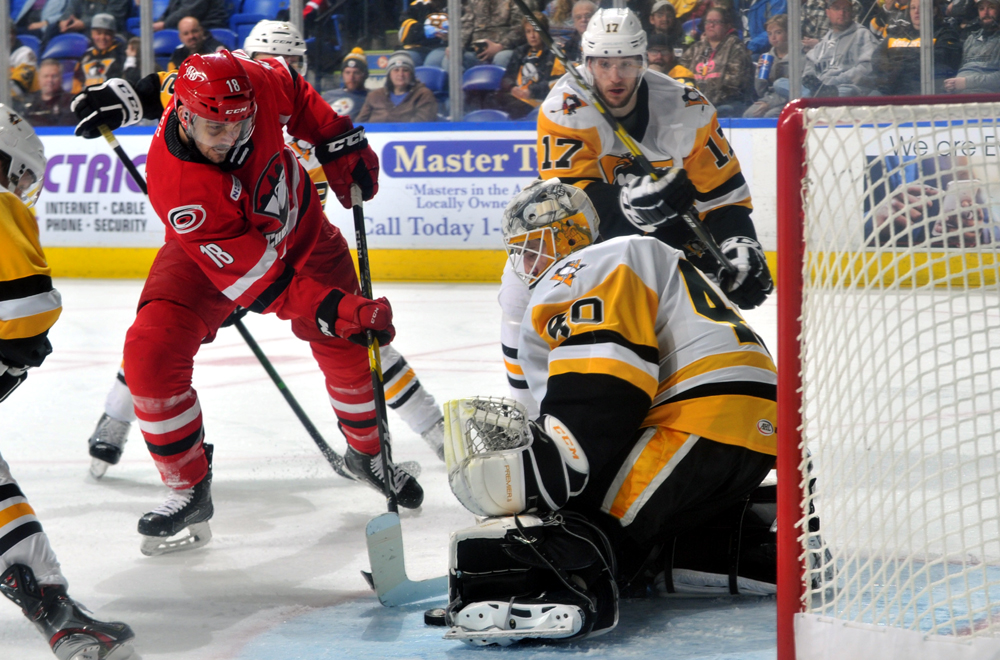 Wilkes-Barre/Scranton (11-6-1-1) and its opponent were both handed a bevy of power play opportunities throughout the game, but the Checkers’ late conversion was enough to sneak away with the win.

Checkers goalie Alex Nedeljkovic had to be good from the get-go, with the Penguins taking 3-0 and 4-1 advantages on the shot clock in the early stages of the first period. However, Charlotte eventually went on a seven-shot run to end the period and finished the frame up, 8-4.

With the aid of four-straight power plays, the Checkers continued to tilt the ice, proceeded to out-shoot the Penguins 14-4 in the second period alone. Dustin Tokarski was magnificent for Wilkes-Barre/Scranton during these man disadvantages, continually turning aside Charlotte’s bids with his glove, blocker, pads and paddle time and time again.

The Penguins opened up the third period playing with a purpose, generating a mini-break chance for Stefan Noesen merely 23 seconds into the period. Noesen, Wilkes-Barre/Scranton’s leading goal scorer, was thwarted by Nedeljkovic’s glove. Undeterred, the Penguins continued to unload excellent scoring chances on the Checkers’ net, and with the exception of three separate post shots hit by the Penguins, Nedeljkovic was up to the task every time.

Charlotte used its sixth power play of the night to generate the game’s first and only. Chase Priskie lifted a shot to the top shelf over Tokarski’s glove goal at 15:37 of the third period.

Nedeljkovic was credited with 22 stops for the shutout victory, while Tokarski recorded 26 saves in the loss. In fact, tonight marked the first time since he was acquired by Mike Vellucci last year in Charlotte that Dustin Tokarski has lost in regulation. He was previously 14-0-1 in games with Vellucci behind the bench, split between Charlotte and Wilkes-Barre/Scranton, regular season and playoffs.

Wilkes-Barre/Scranton’s next game is Wednesday, Nov. 27 against the Lehigh Valley Phantoms. Puck drop between the Penguins and Phantoms is scheduled for 7:05 p.m. at Mohegan Sun Arena at Casey Plaza.