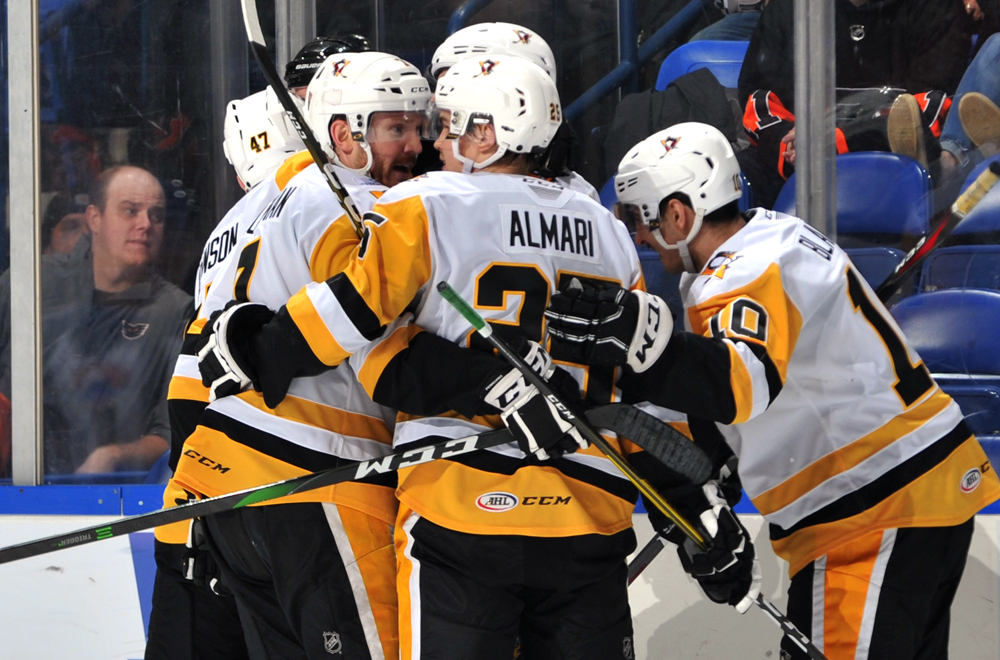 Wilkes-Barre/Scranton (12-6-1-1) took the lead in the first period and maintained it throughout the game. The Penguins cashed in for two goals in all three periods to keep their distance on their Keystone State rival.

The game started with an exchange of quick goals. Lehigh Valley’s Tyler Wotherspoon put a tally on the board 1:22 into the game. However, Wilkes-Barre/Scranton roared back with a power-play goal less than two minutes later. Andrew Agozzino and Adam Johnson combined for a tic-tac-toe set-up that culminated to Stefan Noesen finishing the play on the backdoor.

The Penguins struck again before the period came to an end, as Johnson tucked in a wrap-around for his first goal of the season.

Noesen notched his second goal of the night and league-leading 14th goal of the year on a second-period breakaway goal at 3:44. The Phantoms retaliated at 5:05 with a goal by Pascal Laberge, making it 3-2.

Midway through the middle frame, Joseph Blandisi delivered another man-advantage marker for the Penguins, crashing the net for a rebound and pushing their lead to 4-2.

Thomas Di Pauli finished off the third period with two goals for Wilkes-Barre/Scranton. The first one was an empty-net goal with 3:10 left in regulation. He managed to score again on a breakaway with 45 seconds left to bring the game to its final score, 6-2.

Casey DeSmith posted 30 saves in the win for the Penguins, while Alex Lyon denied 24 of the 29 shots he faced for the Phantoms.

Wilkes-Barre/Scranton’s next game is a rematch with Lehigh Valley, taking place after Thanksgiving on Friday, Nov. 29 at PPL Center. The Penguins’ next home game is Saturday, Nov. 30 against the Bridgeport Sound Tigers. Puck drop between the Penguins and Sound Tigers is scheduled for 7:05 p.m.