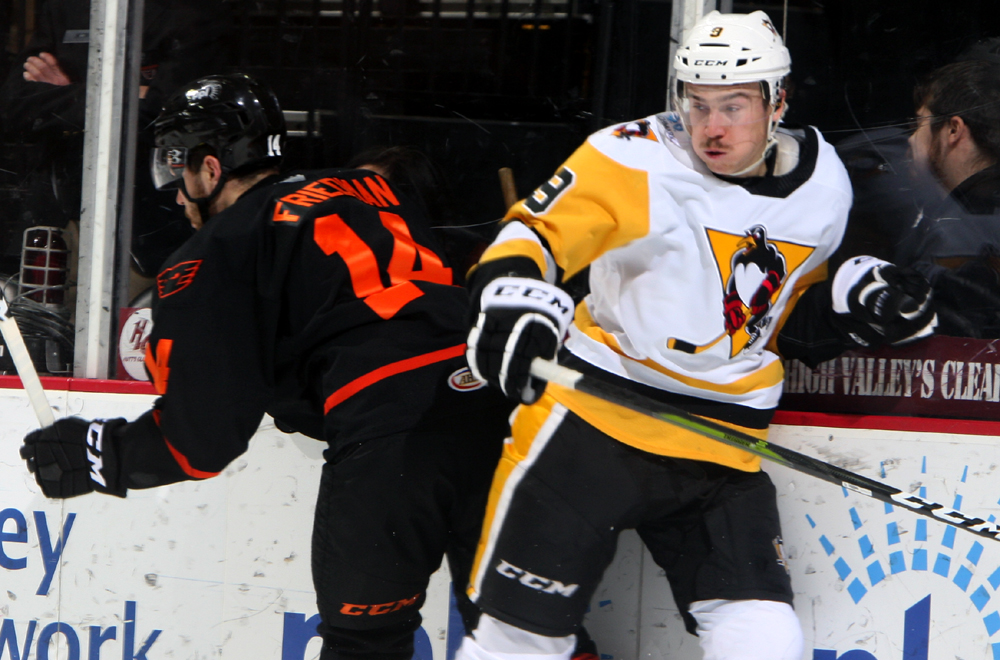 ALLENTOWN, Pa. – The Wilkes-Barre/Scranton Penguins nearly pulled off an unthinkable comeback win, but lost to the Lehigh Valley Phantoms in overtime, 6-5, on Friday night at PPL Center.

Wilkes-Barre/Scranton (12-6-2-1) erased a five-goal deficit to force the extra session. Andrew Agozzino netted two goals and added an assist in the third period for the Penguins as they came back from down 5-0 to pull even, 5-5.

The Phantoms got the scoring started with three goals in under three minutes in the first period. Matthew Strome tipped in a power-play goal at 5:29 of the opening frame, and Pascal Laberge added an even-strength marker for the Phantoms 21 seconds later. Carsen Twarynski netted a goal on the rush at 8:08 of the first period, making it 3-0.

Isaac Ratcliffe lit the lamp just 61 seconds into the middle frame, extending the Phantoms’ lead to 5-0.

The Penguins cut into the deficit with a man-advantage marker of their own in the late stages of the second period. Jamie Devane set a screen in front of Jean-François Bérubé just as Thomas Di Pauli’s wrist shot rocketed towards the net. Devane got a piece of the puck on its way into the net, giving him his first goal as a Penguin.

Much like Lehigh Valley did in the first period, Wilkes-Barre/Scranton pulled off an onslaught of scoring in the third, posting three goals in under three minutes. The flurry started with Andrew Agozzino swiping in a rebound at 9:22 of the final frame of regulation, and was swiftly followed by goals from Anthony Angello and an Agozzino breakaway at 11:06 and 12:09, respectively.

With the goalie pulled and an extra attacker on the ice, the Penguins equalized on a snipe by Adam Johnson from an impossible angle. Johnson let loose with a high-rising wrister from along the goal line that blazed to the top corner and past Bérubé with only two minutes left in regulation.

Emil Larmi recorded 20 saves in the post-regulation loss, whereas Bérubé was credited the win with 38 stops.

Wilkes-Barre/Scranton’s next game is back on home ice tomorrow, Saturday, Nov. 30, against the Bridgeport Sound Tigers. Puck drop between the Penguins and Sound Tigers is scheduled for 7:05 p.m. at Mohegan Sun Arena at Casey Plaza.