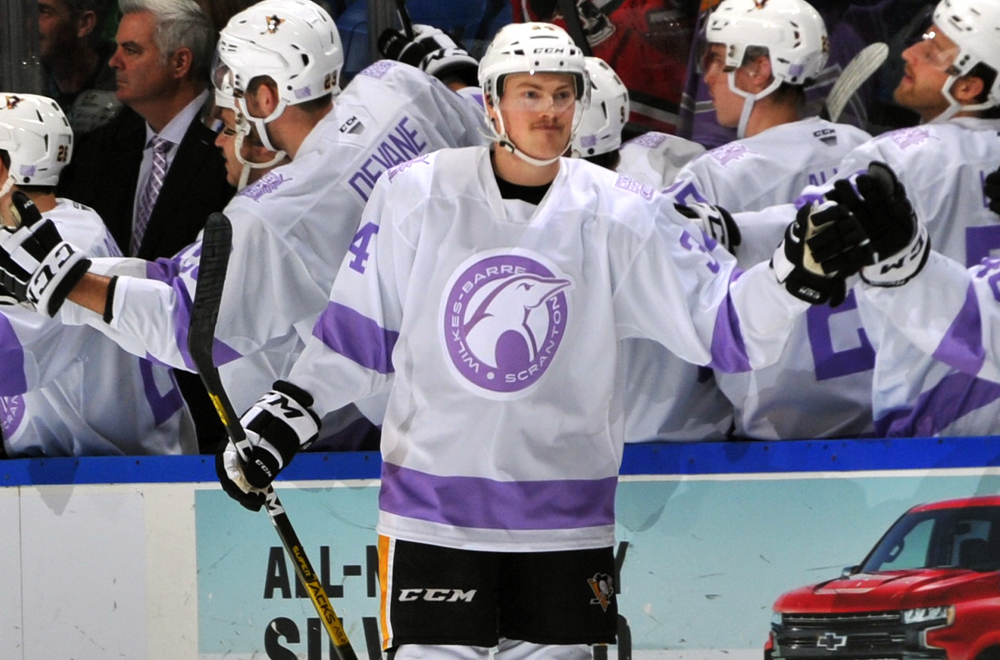 WILKES-BARRE, Pa. – The Wilkes-Barre/Scranton Penguins ended their stellar November by cruising to a 5-2 win over the Bridgeport Sound Tigers on Saturday night at Mohegan Sun Arena at Casey Plaza.

Wilkes-Barre/Scranton (13-6-2-1) received multi-point performances from up and down its lineup, with five different players finding the scoresheet more than once in the team’s ninth win of the month.

The Penguins started the scoring early with a power-play goal by Sam Miletic. Oula Palve’s point shot generated a series of rebound chances for Wilkes-Barre/Scranton, ending in Miletic sweeping the loose puck to the back of the net at 6:12 of the first period.

Bridgeport answered on a one-timer tally by Parker Wotherspoon midway through the opening frame.

Chase Berger set up back-to-back goals for the Penguins in the second period, first delivering a face-off win to Matt Abt who flicked in his first AHL goal at 6:07 of the middle frame. Roughly five minutes later, Berger cycled the puck down to Adam Johnson, who then cut to the high slot and slid a lot shot to the back of the net.

Matt Lorito sliced the Penguins’ lead down to 3-2 by collecting a rebound at the front of Casey DeSmith’s net at 13:27 of the second period.

Up by one as the third period began, the final frame of regulation was completely controlled by Wilkes-Barre/Scranton. The Penguins were rewarded for their hard work with goals by Anthony Angello and Palve, the latter of which also tallied his first AHL goal.

DeSmith posted 26 saves to earn his 10th win of the season, while Jakub Škarek was handed the loss with 29 stops.

Wilkes-Barre/Scranton’s next game is back on home ice tomorrow, Saturday, Nov. 30, against the Bridgeport Sound Tigers. Puck drop between the Penguins and Sound Tigers is scheduled for 7:05 p.m. at Mohegan Sun Arena at Casey Plaza.