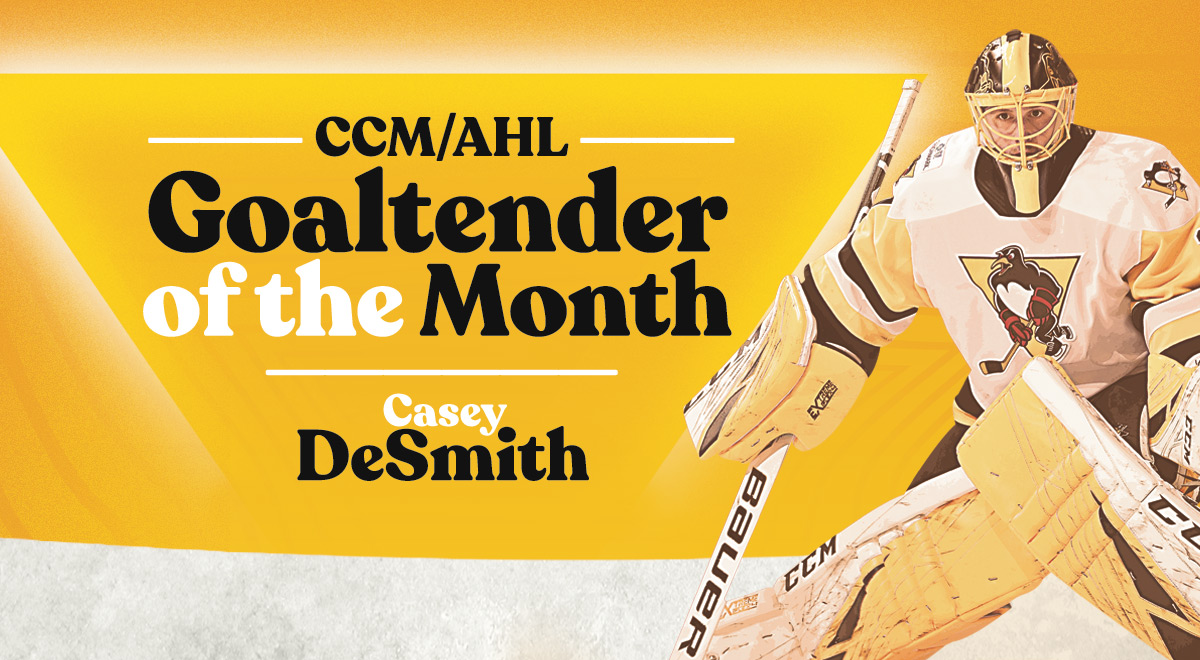 WILKES-BARRE, Pa. – The American Hockey League announced today that Wilkes-Barre/Scranton Penguins goalie Casey DeSmith has been named CCM/AHL Goaltender of the Month for the month of November.

DeSmith, 28, racked up a 7-1-0 record during November and helped the Penguins climb the Atlantic Division standings all the way up to first place at the end of the month. During that time, DeSmith posted a 1.60 goals against average, a .951 save percentage and recorded two shutouts. One of his shutouts was a 1-0 blanking of the Hershey Bears that saw DeSmith make 25 saves in regulation, three in overtime and then turn aside all three attempts in the shootout en route to his second consecutive clean sheet. The Rochester, New Hampshire native also posted 40 or more saves in two of his seven wins during November.

DeSmith is the seventh goalie in team history to be named CCM/AHL Goaltender of the Month, joining Brad Thiessen, John Curry, Jeff Zatkoff, Peter Mannino, Eric Hartzell and Matt Murray as Penguins netminders to earn the honor. Originally an undrafted free agent, DeSmith’s seven victories in November moved him up to fourth place on the Wilkes-Barre/Scranton all-time wins list (49).

Wilkes-Barre/Scranton’s next game is Friday, Dec. 6 against the Texas Stars. The first ever meeting between the Penguins and Stars is also an Eyewitness News Fan Friday, with lower-bowl seating available for $15 and select draught beers on sale from 6:00 – 7:30 p.m. Puck drop between the Penguins and Stars is scheduled for 7:05 p.m. at Mohegan Sun Arena at Casey Plaza.