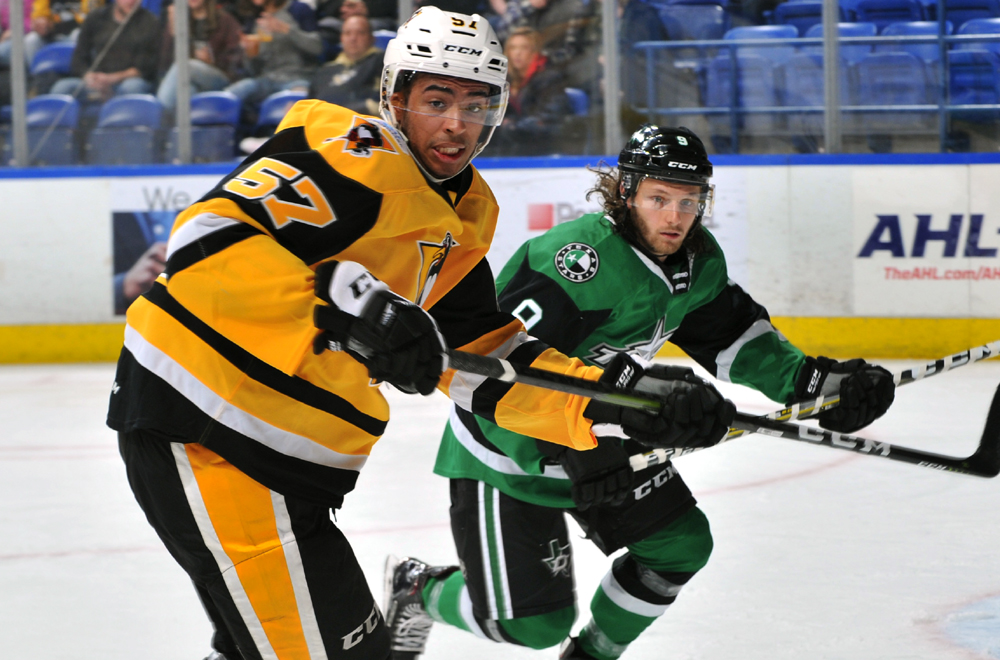 WILKES-BARRE, Pa. – In the first-ever clash between the Wilkes-Barre/Scranton Penguins and Texas Stars, the Stars walked away from a back-and-forth contest with a 4-3 decision at Mohegan Sun Arena at Casey Plaza on Friday night.

Wilkes-Barre/Scranton (13-7-2-1) battled hard to erase multiple deficits throughout the night, but was unable to equalize after an early third-period tally granted Texas a one-goal lead.

The Stars struck first at 7:15 of the opening frame. After Riley Tufte’s initial shot was turned aside by Casey DeSmith, Michael Mersch gathered the rebound shot and lifted it over a sprawling DeSmith for a 1-0 lead.  The Penguins quickly responded with Andreas Martinsen stripping Stars goalie Jake Oettinger of the puck and depositing a wrap-around goal for his first tally with the team.

Joel Kiviranta reestablished the Stars’ lead a mere 1:42 into the second period. Kiviranta then notched another goal midway through the middle frame, making it 3-1, Texas.

The Penguins stormed back with two goals in under a minute, starting with a man-advantage marker from Andrew Agozzino at 13:14 of the middle frame. Then, 38 seconds later, Pierre-Olivier Joseph buried his first AHL goal scored to tie the game at 3-3. Wilkes-Barre/Scranton continued to generate a flurry of scoring chances before the second intermission, but none managed to put the black and gold in the lead

Texas pulled ahead, 4-3, and never looked back after Nick Caamano scored on a breakaway just 71 seconds into the third period. Oettinger proceeded to deny the Penguins on all 14 of their shots in the third period and help the Stars hang on for the win.

Oettinger posted 26 saves on the night, while DeSmith recorded 22 stops.

Wilkes-Barre/Scranton will get a chance at revenge tomorrow, Saturday, Dec. 7, as it takes on the Texas Stars again for the second game of a back-to-back set at Mohegan Sun Arena at Casey Plaza. Puck drop between the Penguins and Stars is scheduled for 7:05 p.m.