SECOND-PERIOD FLURRY NOT ENOUGH IN PENGUINS’ LOSS TO STARS 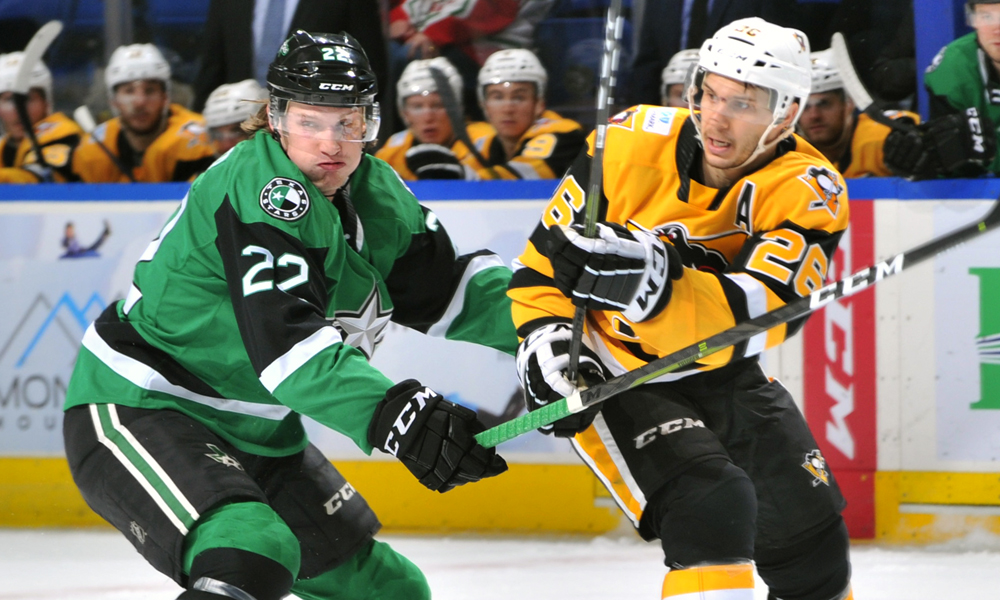 WILKES-BARRE, Pa. – The Wilkes-Barre/Scranton Penguins lost to the Texas Stars, 5-3, on Saturday night at the Mohegan Sun Arena at Casey Plaza.

Wilkes-Barre/Scranton (13-8-2-1) erupted for three goals in less than four minutes on their annual Teddy Bear Toss Night, but that eruption of offense was enough as an early third-period goal by Texas foiled the Penguins for the second game in a row.

Texas put the game’s first tally on the board at 15:10 of the first period. Jason Roberston scored with the help of Joel L’Esperance on a two-on-one rush by sliding a shot through Emil Larmi’s five-hole. Roberston notched his second goal of the night on another odd-man opportunity in the first period, but this time, his marker came with less than a second left in the opening frame.

Down 2-0, the Penguins notched their first goal of the game on a tip-in by Sam Miletic at 4:38 of the middle frame. Miletic’s goal set off the Teddy Bear Toss, with thousands of stuffed animals raining down on the ice by crowd to be donated to Operation Santa Claus operating out of Tobyhana Army Depot.

With a five-on-three power play, David Warsofsky tied the game at 7:17. The Penguins then leapt into a 3-2 lead on their remaining man-advantage time following the five-on-three. Zach Trotman unloaded a slap shot to the back of the net for the go-ahead goal and his 100th pro point.

The Stars evened the scales again, 3-3, at 11:48 of the middle frame on a power-play goal by Joel L’Esperance.

Just 15 seconds into the final period, Joel Kiviranta took a weird bounce in the Penguins’ zone and slid it across the goal line for what became the game-winning goal. Nicholas Caamano eventually tacked on an empty-net goal for the Stars to lock up the win.

Larmi recorded 28 saves in the loss for the Penguins, while Landon Bow posted 26 stops for the win.

Wilkes-Barre/Scranton’s next game is tomorrow, Sunday, Dec. 8, against the Hershey Bears at Giant Center. The Penguins next home game is Wednesday, Dec. 18 against the Providence Bruins. Puck drop between the Penguins and Bruins is scheduled for 7:05 p.m. at Mohegan Sun Arena at Casey Plaza.