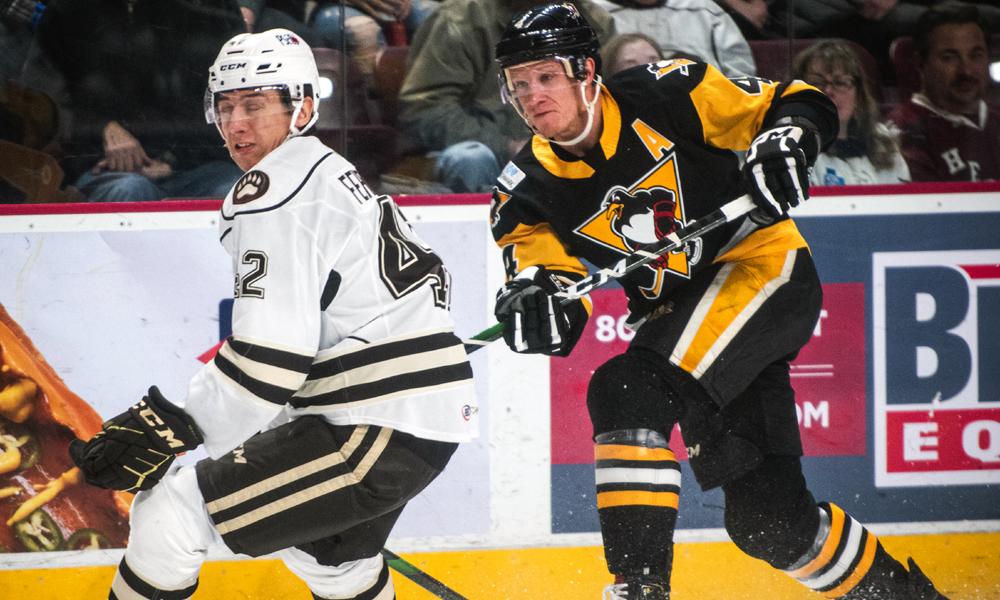 HERSHEY, Pa. – The Wilkes-Barre/Scranton Penguins battled to a 3-2 overtime loss against the Hershey Bears on Sunday night at Giant Center.

Wilkes-Barre/Scranton (13-8-3-1) received a sensational, 32-save showing from goaltender Casey DeSmith. However, the Penguins’ opponent broke through in the third period and earned the extra point with Joe Snively’s game-winner at 2:50 of overtime.

The Penguins got off to a hot start by tallying twice in under two minutes to seize a 2-0 lead. The first goal of the night came from Sam Miletic, who made a jaw-dropping move at the net-front and delivered a backhand finish 6:32 into the game. Anthony Angello notched another one for the black and gold just 1:44 later.

DeSmith turned in one of his finest saves of the season in the dying seconds of the opening frame, rocketing his body across the crease to deny Snively on a two-on-one. The reigning CCM/AHL Goaltender of the Month continued to stonewall the Bears after the intermission, too.

During the second period, Hershey generated 18 shots on goal. DeSmith denied all 18, maintaining his team’s two-goal lead through 40 minutes of play.

Hershey finally put their first point on the board with a man-advantage marker by Matt Mouslon at 2:35. The Bears tied the game, 2-2, at 8:45 with a seeing-eye point shot from Christian Djoos.

Snively ended the game in overtime on an odd-man rush with Mike Sgarbossa. Sgarbossa’s wrist shot rang off the crossbar, but kicked right to Snively who wasted no time slamming the puck to the back of the net.

Pheonix Copley earned the win in net for Hershey, amassing 23 saves through regulation and OT.

Wilkes-Barre/Scranton’s next game is Wednesday, Dec. 11 when it travels to take on the Rochester Americans at Blue Cross Arena. The Penguins next home game is Wednesday. Dec. 18 against the Providence Bruins. Puck drop between the Penguins and Bruins is scheduled for 7:05 p.m.

A PAIR OF SUPER HOME GAMES THIS WEEKEND