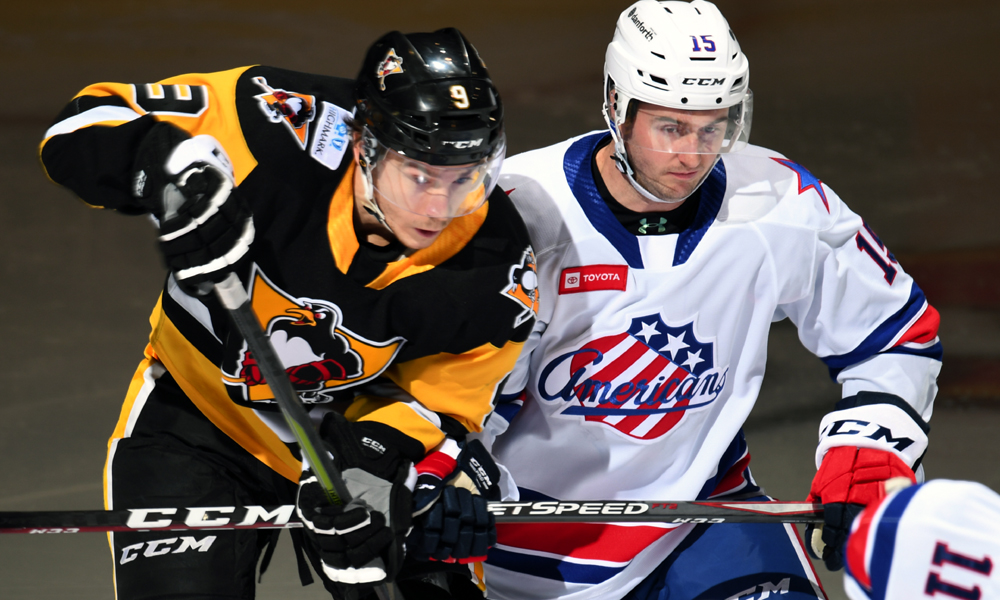 Wilkes-Barre/Scranton (13-9-3-1) generated a late-game push to put Rochester on its heels, but it came too late in the game to come back from what was once a four-goal deficit.

The Americans struck first on a goal by Curtis Lazar at 7:04 of the first period. At almost exactly the same time in the second period, Jean-Sébastien Dea found the back of the net, doubling Rochester’s lead to 2-0.

Smothered for the first half of the third period, the Penguins went almost 11 minutes without a shot on goal. Once it looked like Wilkes-Barre/Scranton was turning a corner, the Americans tallied again. Andrew Oglevie tipped a shot in the high slot and beat Casey DeSmith with the redirection at 12:43 of the final frame.

Down by three, Wilkes-Barre/Scranton pulled its goalie in exchange for an extra attacker with more than six minutes left in regulation. C.J. Smith hit the empty net to make it 4-0, but after that, the Penguins turned a corner.

Just 19 seconds after the empty-net goal against, Jan Drozg raced into the offensive zone and ripped a wrister past Andrew Hammond for his first AHL goal. Then Drozg assisted on a Sam Miletic tally with only 1:56 left in the game.

With the extra attacker on the ice yet again and less than a minute to play, Andrew Agozzino delivered a perfect cross-crease pass to the wheelhouse of Joseph Blandisi, but his one-timer was robbed by Andrew Hammond. Hammond’s stop quelled the Penguins’ comeback fire, and the game ended, 4-2.

DeSmith notched 26 saves for the Penguins, while Hammond posted 20 stops for the Americans.

Wilkes-Barre/Scranton’s next game is Friday, Dec. 13, the first game of a back-to-back set at Rocket Mortgage FieldHouse against the Cleveland Monsters. The Penguins’ next home game is Wednesday, Dec. 18 against the Providence Bruins. Puck drop between the Penguins and Bruins is scheduled for 7:05 p.m.