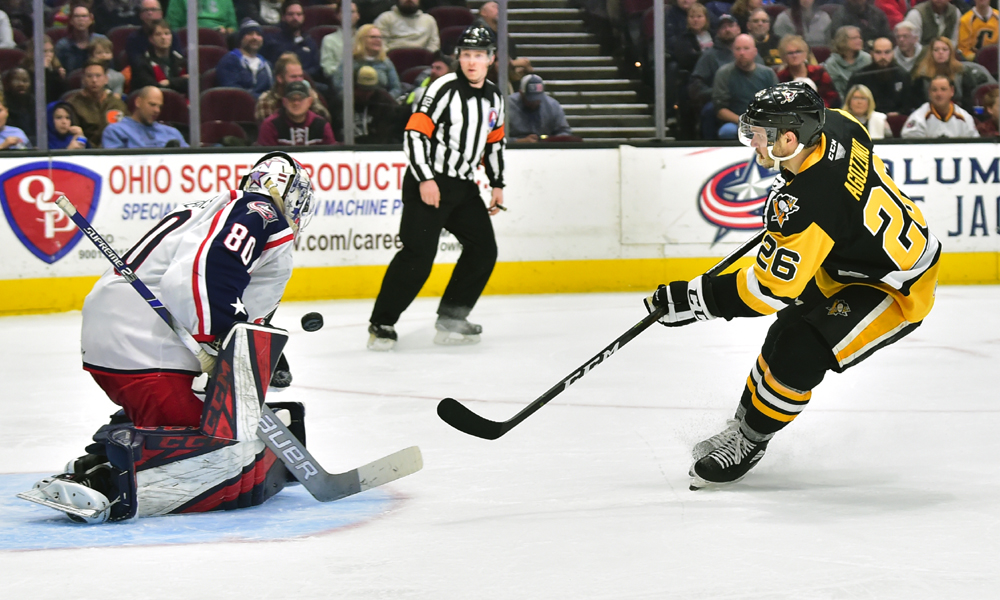 Friday the 13th proved to be an unlucky showing for Wilkes-Barre/Scranton (13-10-3-1), which out-possessed its opponent in the first and third periods, but were unable to capitalize on Cleveland goalie Matīss Kivlenieks.

The Penguins were abuzz from the start of the game, but a window of opportunity opened for the Monsters late in the first period, and they seized it. Kevin Stenlund scored on a one-timer at 14:08 while Cleveland was on a two-man advantage.

The Monsters extended their lead a little over half way through the second period. Casey DeSmith turned aside Justin Scott on a mini-break after a turnover in the Penguins’ zone and then followed that up by denying Jakob Lilja on the rebound. However, Lilja scooped up the puck for a third attempt that slid past the Penguins’ goaltender and in.

Kivlenieks made a flurry of stops on the Penguins after they pulled the goalie for an extra attacker late in the final frame. Eventually, Marko Daňo found the empty net for the Monsters, sealing the 4-0 win.

Kivlenieks was awarded a 23-save shutout, while DeSmith posted 26 saves on 29 shots in defeat.

Wilkes-Barre/Scranton will get right back after it again tomorrow, Saturday, Dec. 14, in a rematch with the Cleveland Monsters at Rocket Mortgage FieldHouse. The Penguins’ next home game is Wednesday, Dec. 18 against the Providence Bruins. Puck drop between the Penguins and Bruins is scheduled for 7:05 p.m.