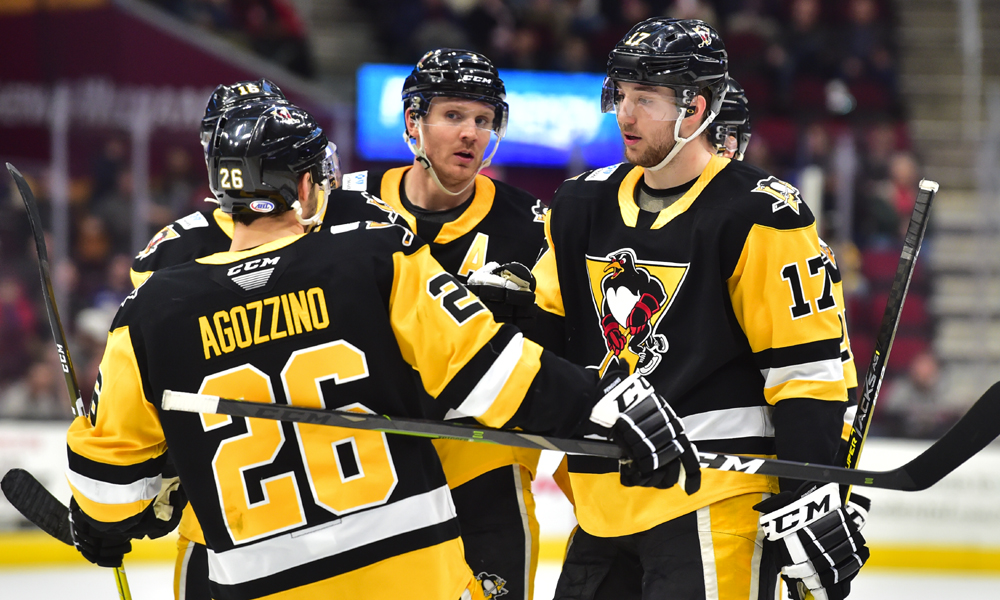 Penguins to go head-to-head with Bruins twice at home

Wednesday, Dec. 11 – PENGUINS 2 at Rochester 4
Jan Drozg’s first AHL goal helped spark a late-game push by Wilkes-Barre/Scranton, but Rochester hung on for the win. The Penguins penalty kill also had a successful night, going four-for-four in the team’s only visit to Rochester this season.

Friday, Dec. 13 – PENGUINS 0 at Cleveland 4
The Penguins were shut-out for the third time this season despite out-possessing the Monsters for most of the game. Cleveland goalie Matīss Kivlenieks made 23 saves in the win.

Saturday, Dec. 14 – PENGUINS 3 at Cleveland 1
Anthony Angello scored twice to help put the Penguins back in the win column. Angello tallied in the first and second periods, and Thomas Di Pauli eventually tacked on an insurance marker with an empty-net goal. Dustin Tokarski made 27 saves to improve to 3-1-1 as a Penguin.

Wednesday, Dec. 18 – PENGUINS vs. Providence
Wilkes-Barre/Scranton and Providence square off for the first time this season in a game between two of the top teams in the Atlantic Division. The two rivals split their season series last year, three wins apiece.

Friday, Dec. 20 – PENGUINS vs. Providence
For the second time this week, the Penguins host the P-Bruins. Providence’s penalty kill is among the league’s best, (7th, 85.3%) and has 10 shorthanded goals, most in the AHL.

Saturday, Dec. 21 – PENGUINS at Bridgeport
For their last game before the holiday break, the Penguins bus to Bridgeport and face-off against the Sound Tigers. Wilkes-Barre/Scranton is 2-0-0-0 in games against Bridgeport this season, and the Penguins’ Sam Miletic scored in both games.

– The Penguins are 3-0-0-0 this season following a shutout loss.

– Casey DeSmith has recorded the third-most saves in the  AHL (520).

– Anthony Angello’s two-goal outing on Saturday was the third multi-goal game of his career (including playoffs).

– Jon Lizotte leads the Penguins with a plus-11 rating. He is one of only three rookies in the league to top his team in plus/minus.