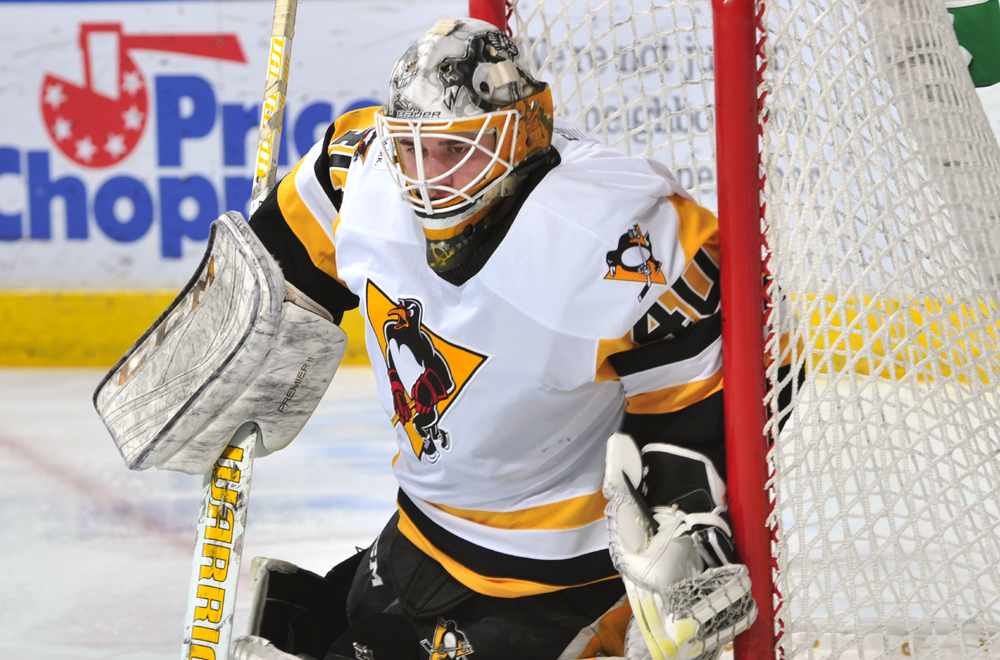 WILKES-BARRE, Pa. – The Wilkes-Barre/Scranton Penguins shut-out the Providence Bruins and gutted out a 1-0 win on Friday night at Mohegan Sun Arena at Casey Plaza.

After being blanked by the Bruins earlier in the week, Wilkes-Barre/Scranton (15-11-3-1) exacted its revenge with a smothering defensive effort. Dustin Tokarski notched 23 saves for his first shutout as a Penguin.

Both the Penguins and the Bruins failed to score in an evenly-matched, methodical first period. Providence’s best chance came with two minutes to go in the first, but Tokarski smothered the shot from Paul Carey.

Sixteen minutes into the second period, Wilkes-Barre/Scranton’s Anthony Angello broke the scoring drought. Just seven seconds into a power-play, his cross-crease pass caromed off one of the Bruins’ skates and found the back of the net.

The Penguins allowed few chances in the final frame of regulation, limiting the Bruins to just six shots. With Providence desperately trying to tie the score with their goalie pulled and extra attacker on the ice, Tokarski made two huge saves under the two-minute mark to seal the victory for Wilkes-Barre/Scranton.

Dan Vladař posted 19 saves in the loss for the Bruins.

Wilkes-Barre/Scranton’s next game is tomorrow, Saturday, Dec. 21, against the Bridgeport Sound Tigers at Webster Bank Arena. The Penguins’ next home game is Friday, Dec. 27 against the Lehigh Valley Phantoms. Puck drop between the Penguins and Phantoms is set for 7:05 p.m. at Mohegan Sun Arena at Casey Plaza.