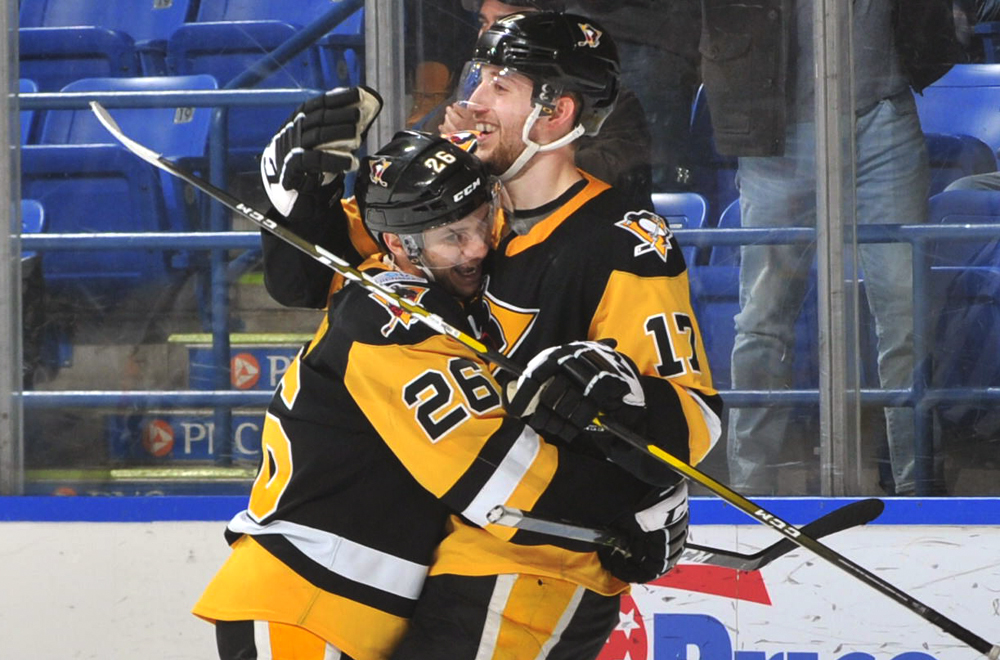 Wilkes-Barre/Scranton (16-12-3-1) saw its offense explode in the third period, including a shorthanded goal and two of Angello’s tallies on the night.

The Phantoms scored first as Gerry Fitzgerald put a rebound in the back of the net just 31 seconds into the game.

Wilkes-Barre/ Scranton answered when Angello scored his first of the night at 3:31 of the second period, but that was the extent of the offense during the frame.

At the start of the third, Dustin Tokarski replaced Casey DeSmith in the net for Wilkes-Barre/ Scranton. Tokarski watched on as the Penguins took an early lead after another goal by Angello at 1:26. Shortly thereafter, the Phantoms went to the power play, but the Penguins’ Jake Lucchini scored short-handed. Lucchini’s first career short-handed goal extended Wilkes-Barre/ Scranton’s lead to 3-1.

The Phantoms promptly responded to Lucchini’s shorty with a tip-in at the side of the net from Matthew Strome during that same man advantage.

Eventually, Lehigh Valley brought goaltender Alex Lyon to the bench for an extra attacker, but that only opened the door for Angello to complete the hat trick. Andrew Agozzino earned his third assist of the night by setting up Angello for the empty-net goal with less than a minute left in regulation.

DeSmith was credited with the win despite leaving the game early in the third period, having made 20 saves on 21 shots faced. Tokarski denied seven of the eight shots thrown his way. Lyon stopped 23 shots in the loss.

Wilkes-Barre/Scranton’s next game is tomorrow, Saturday, Dec. 28, when it takes on the Hershey Bears at the Giant Center. The Penguins’ next home game is on Tuesday, Dec. 31, a New Year’s Eve matinée against the Springfield Thunderbirds. Puck drop between the Penguins and T-Birds is scheduled for 3:05 p.m. at Mohegan Sun Arena at Casey Plaza.