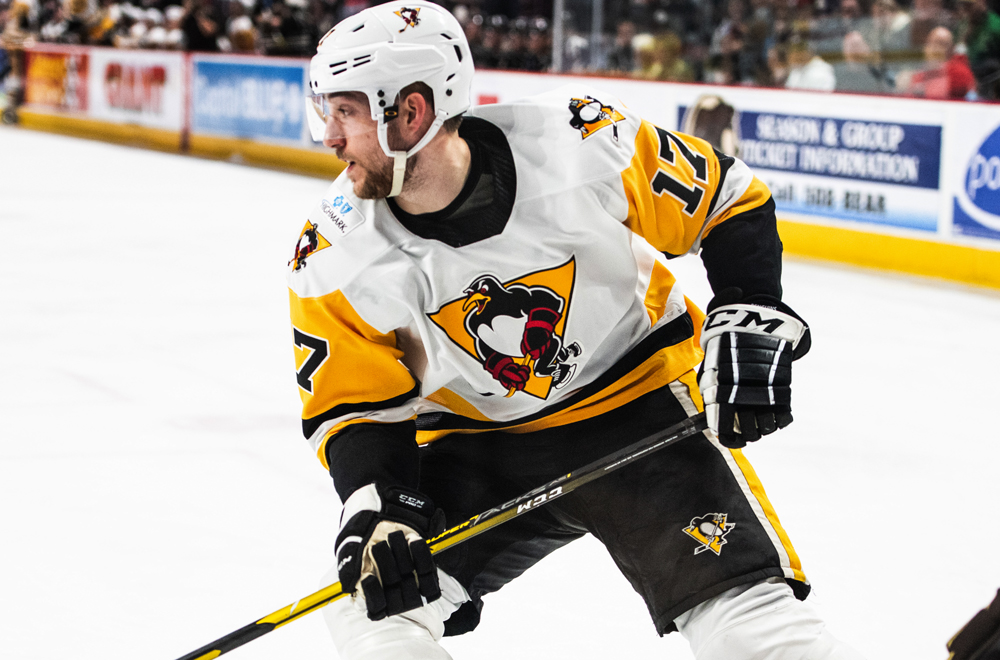 Wilkes-Barre/Scranton looks to end 2019 on a roll

Friday, Dec. 27 – PENGUINS 4 vs. Lehigh Valley 2
Anthony Angello notched the first hat trick of his pro career, helping Wilkes-Barre/Scranton get the win coming out of the holiday break. Jake Lucchini’s early third-period shorthanded goal proved to be the game-winner that gives the Penguins the edge in their season series with the Phantoms (4-2-1-0).

Saturday, Dec. 28 – PENGUINS 2 at Hershey 1
Angello scored again for his 13th goal of the season, but the recently reassigned Thomas Di Pauli potted a man-advantage marker that put the Penguins over the top. Wilkes-Barre/Scranton’s defense was excellent, allowing no goals at even strength, and Dustin Tokarski turned in a 29-save gem on the way to victory.

Tuesday, Dec. 31 – PENGUINS vs. Springfield
A New Year’s Eve matinée at Mohegan Sun Arena at Casey Plaza will be the battlefield between two teams fighting for positioning in the Atlantic Division. The Thunderbirds trail the Penguins by only two points for the division’s fourth and final playoff spot.

Friday, Jan. 3 – PENGUINS vs. Hershey
Wilkes-Barre/Scranton begins 2020 against its oldest rival, the Hershey Bears. The Bears have found a knack for playing in tight games this season, participating in 20 games decided by one goal, including three losses to the Penguins.

Saturday, Jan. 4 – PENGUINS vs. Springfield
The Penguins and Thunderbirds face-off for the second time in a week, and for the last time at Mohegan Sun Arena at Casey Plaza this season. Wilkes-Barre/Scranton has earned points in each of its three games against Springfield, going 2-0-0-1. Andrew Agozzino leads the season series with four goals.

– The Penguins are 5-0-0-0 this season following a shutout loss.

– Anthony Angello has scored eight of the Penguins’ last 13 goals.

– Angello’s hat trick on Friday was the team’s first hat trick of the season.

– Jake Lucchini’s goal on Friday was the first shorthanded goal of his career.

– Andrew Agozzino’s next game will be his 500th in the AHL.

– With assists in back-to-back games, Pierre-Olivier Joseph recorded points in consecutive games for the first time as a pro.